Carlo Randall is in his mid-forties, but could pass for ten years younger. He is slight and strong, with long dreadlocks past his waist. As a bush doctor and community leader, Randall has been exploring indigenous plant medicine for over two decades, focusing on the oral traditions of the Khoisan first peoples of South Africa's Western Cape, the ethno-linguistic group first inhabiting the region. This work, Randall says, is the outcome of reclaiming his cultural roots and indigenous Khoisan identity.

Randall propagates plants from the Cape Floristic Region, a biodiversity hotspot with the world's highest concentration of plant species, to treat and prevent ailments and disease. He doses out and combines plant medicine in carefully brewed teas, incorporating a thorough understanding of anatomy and conventional medicine alongside Khoisan indigenous knowledge.

"It's about education. It's empowerment. It's about building."

For him, the practice he has developed is as much about healing historical trauma as it is about healing people. "There is a bigger picture beyond just growing and using plant medicine," Randall says. "It's about education. It's empowerment. It's about building." 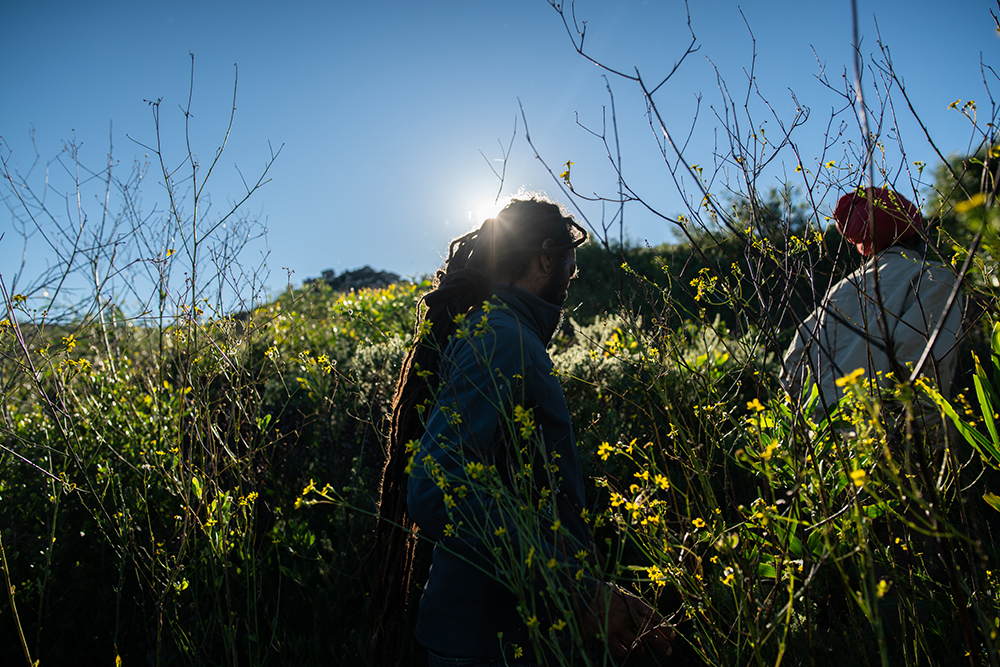 Carlo and a colleague explore the grounds surrounding his indigenous garden in Solomon Square.

Randall was born in Cape Town's District Six, a neighborhood infamously razed by the apartheid state to enforce urban segregation policies. His family was classified as 'colored' - a racial designation, formalized and utilized divisively by the apartheid regime, that collapsed diverse and distinct communities with mixed indigenous African, European, and Asian ancestry into one homogeneous category. Colored identity, however, is more complex than simply a racial grouping imposed by white supremacist rule, and many claim it with pride. In the Western Cape today, nearly half the population identifies as colored.

At that moment, Randall says, "I knew who I was. Identifying my heritage, my roots and culture became tangible."

As a young man in the 1990s, Randall sought spirituality. He grew up Catholic, became a Muslim briefly, and read widely from the Bhagavad Gita and the Koran, from Confucius, Freud and Jung. A fascination with dreadlocks as a recurring spiritual motif brought him into contact with the small but growing Rastafari community in the Western Cape, seeded by the global spread of charismatic reggae music. For Randall, encountering  this community's medicinal plant and herb traders - as well as the 'back-to-roots' messages of African repatriation for slave descendants in the Caribbean - catalyzed a fundamental shift. He realized that the Rasta herbalists' informal trade in indigenous plant medicine was not intrinsically Rastafari, but rather a manifestation of Khoisan oral tradition at risk of extinction. At that moment, Randall says, "I knew who I was. Identifying my heritage, my roots and culture became tangible." 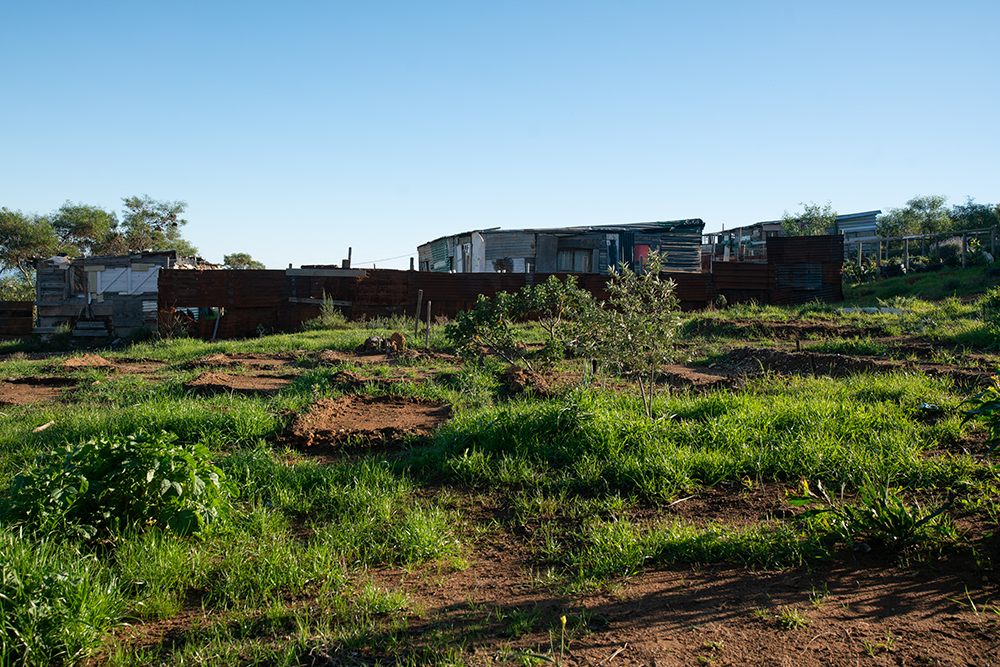 The indigenous garden (above) is a project that was originally envisioned as a medicinal garden but has now evolved to incorporate indigenous foods, as well.

The Khoisan, or precolonial peoples of the Western Cape, comprised a number of pastoralist and hunter-gatherer groups living in the Cape Floristic Region (CFR) that today provides Randall and other bush doctors the plants for their niche trade. The CFR has also given the world geraniums and calla lilies, and to English gardens, gladiolus. Dependent on plant species in the Cape for survival, the Khoisan developed an advanced botanical nomenclature and extensive pharmacopeia. But during European colonization, violence and introduced disease killed many of the Khoisan, and the remaining populations were absorbed into the Cape's slave-holding settlements.

South Africa's colored community today is a product of those colonial settlements into which the surviving Khoisan were acculturated. But growing up during apartheid and coming of age in the 'New South Africa' (a term adopted after Nelson Mandela's release), Randall says his Khoisan identity was systematically denied. In school, he remembers being taught about the Khoisan as separate from South African history - remote, denigrated, without place in the narratives of colored ancestry taught by the state. Until he connected with his Khoisan heritage through indigenous plant medicine, Randall felt he was "just another ambiguous colored person." 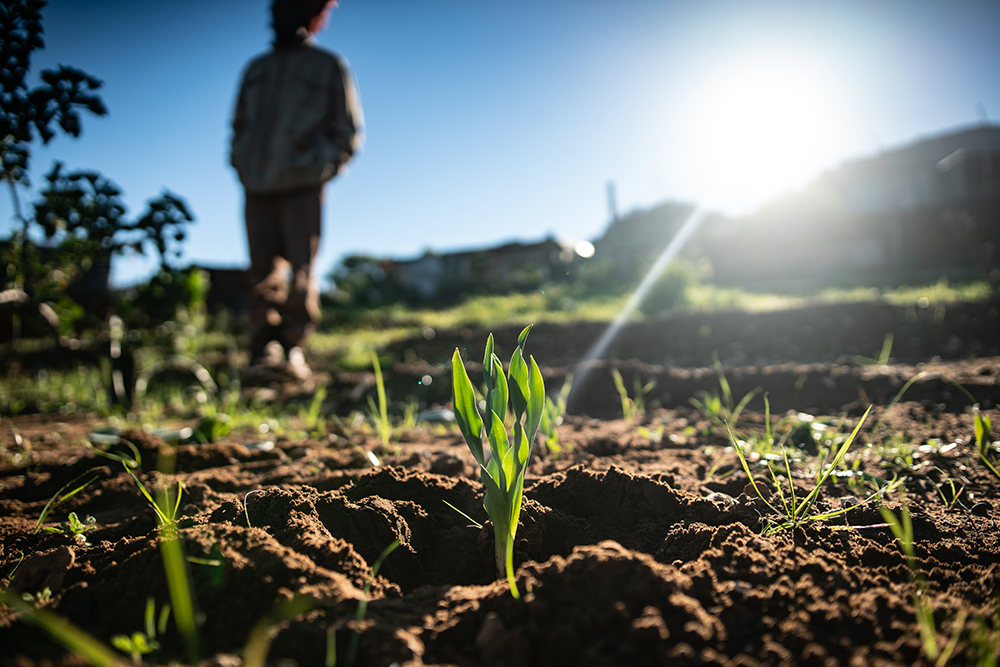 Carlo tends to his indigenous garden in Solomon Square, a Rastafari settlement in the township of Ocean View in South Africa's Western Cape.

After recognizing the Khoisan oral traditions underpinning Rasta herbalism in the Cape, Randall spent the next several years traveling between Rastafari communities and bush doctor mentors, gathering indigenous knowledge. A childhood stint in the Cub Scouts equipped him for camping in the mountains, where many of the bush doctors lived and collected their plants. The medicinal knowledge, too, resonated strongly with Randall, who had pored over his family's medical encyclopedias - "a four-volume set" - and pursued Anatomy and Physiology courses.

Randall recalls an urgency at the beginning of this journey, with Khoisan oral tradition on the verge of extinction. In the last twenty-five years, though, there has been rapid growth in the herbalist sector, as well as an upsurge of academic interest in the trade. By 2014, there were some 2,500 Rasta herbalists practicing in Cape Town, a figure that has almost certainly continued to rise. Most Rastas harvest their medicinal plants from the wild, collectively removing more than 262 tons each year for use in informal traditional medicine trades. Their informal trade takes place predominantly at urban minibus taxi ranks and on street corners busy with commuters, the raw products - bundles of aromatic leaves, whole roots, corms and tubers - arrayed on burlap sacks laid on the pavement.

Randall no longer considers Khoisan oral traditions at risk of extinction. Today's risk, rather, is that this knowledge will be stolen.

Of the species harvested for medicinal trade, roughly a quarter are considered threatened, leading to conservation concerns about ecological impact. For Randall, propagating the plants for his practice rather than strictly wild harvesting has become a critical aspect of his work. Propagation ensures sustainable supply, but Randall stresses the greater importance of garden sites becoming educational spaces, where people can reconnect with and take ownership of their indigenous heritage. 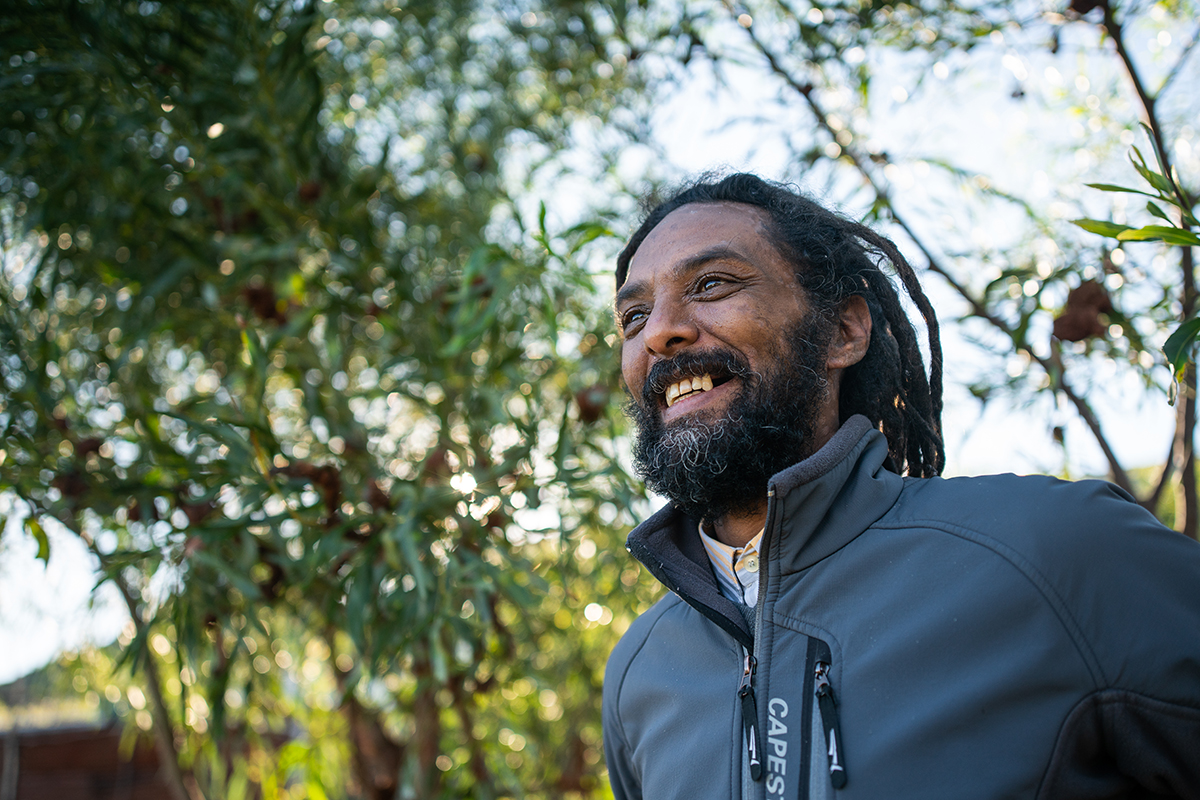 Carlo poses for a portrait in his garden.

Randall, who has been involved in dozens of studies on Rasta and Khoisan ethnobotany and ethnomedicine, no longer considers Khoisan oral traditions at risk of extinction. Today's risk, rather, is that this knowledge will be stolen. South Africa is in the process of passing a controversial Indigenous Knowledge Systems (IKS) Bill, which Randall fears will enable biopiracy  (defined as the unethical or unlawful appropriation or commercial exploitation of biological materials - such as medicinal plant extracts - that are native to a particular country or territory without providing fair financial compensation to the people or government of that country or territory). 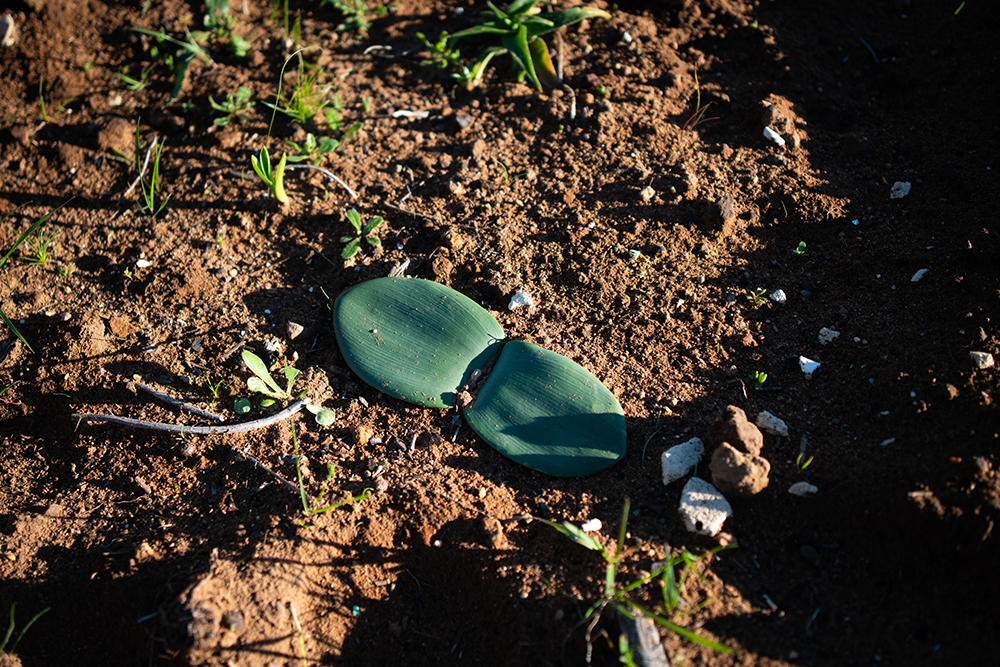 A plant in Carlo's carefully tended garden, where he hopes to empower others through education.

Randall's current propagation project is located in Solomon Square, a Rastafari settlement in the predominantly colored township of Oceanview. Originally envisioned as a medicinal garden, the project has evolved to incorporate indigenous foods and is in the early stages of linking with an initiative connecting chefs interested in indigenous plants to indigenous knowledge holders. As Cape Town burgeons as an international culinary destination, high-end chefs are beginning to drive a fledgling market in edible indigenous plants. Randall sees this project as a platform for sharing knowledge and building indigenous identity, not just tapping into a high-end trend. "I want to see indigenous people become the owners of what is rightfully theirs," he says.

Shaun Swingler is a photojournalist and filmmaker based in South Africa. His work has appeared in The Guardian, Al Jazeera, VICE, TIME and others. shaunswingler.com, @shaunswingler