On a blustery grey-blue day in November I arrived at Maine Sea Farms in Clark's Cove. Though I grew up a couple of miles away by water, by land it took me nearly forty-five minutes to get there. I shook the hands of two men wearing waders, dirty jeans, orange gloves and winter hats. They smiled as I tried to break the proverbial ice with a joke about the bad weather, which fell a little flat because good weather in a Maine winter is more remarkable than bad. As the men led me down a hill, onto a ramp, and into an old boat shed, I heard the roar of a motor starting around the corner and wondered if I was in over my head, trying to capture the rustic beauty of the cove in words and images at the same time. 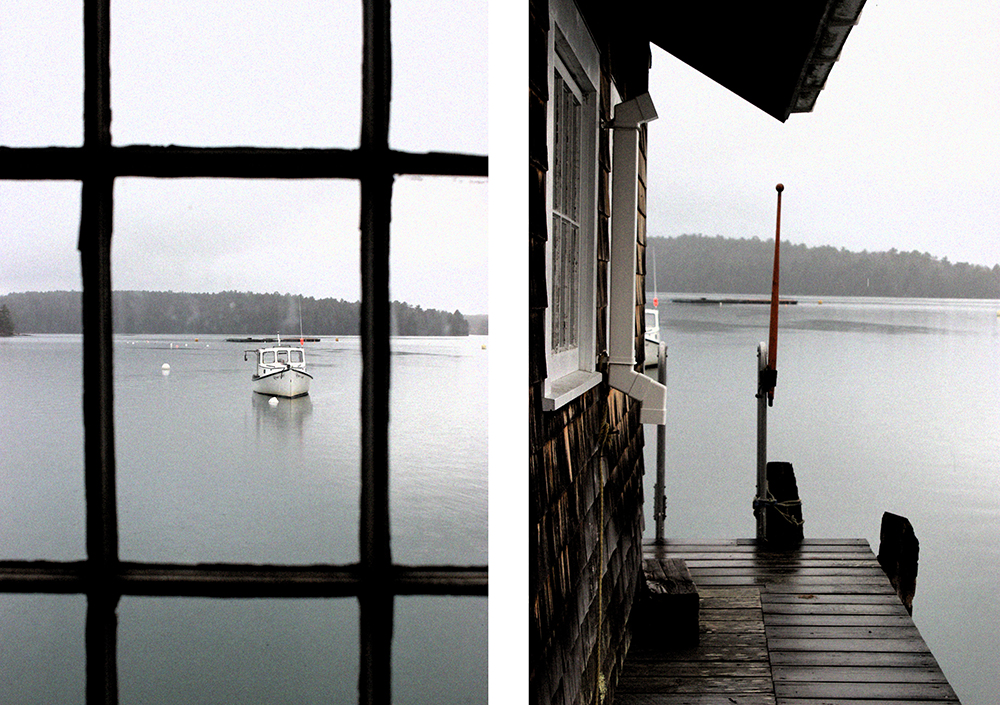 Seth Barker is a lifelong Mainer, and when Peter Fischer shares that he hails from New Jersey, Barker says, "And we don't hold it against you." I chuckled as they elaborated on their histories. Barker comes from a science background with a degree in Marine Biology. He's been working in aquaculture since the 1970's, "Way back taking a ferry out to Peak's island in Casco bay and seeing a guy coming in on a boat full of stringing dories." Fischer moved to Maine when he was in his twenties, and despite his last name, doesn't come from a long line of fishermen. He spent his first Maine summer living in a tent and stumbled upon the ocean as a means of income. "I ended up going out on a Moore with a guy the first winter I lived in Maine, and I was totally fascinated by it." He met Barker in Portland when he was cutting fish on the waterfront and they've been friends ever since. "There were a shitload of fish around then, so there was lots of money to be made," Fischer explained. They took on a lease and banded together a team of Grundens-clad avengers to start Pemaquid Mussel Farms, "Which still exists today, but maybe not two months from now," Fischer tells me during our last socially-distanced conversation in March. Back when seaweed aquaculture had become a focus in Maine, they'd realized they had a huge area of water not being utilized, and expanded into Maine Sea Farms.

It still exists today, but maybe not two months from now.

As we hopped into a boat, I asked Fischer and Barker if they love what they do and what goals they have for the future. "I find it captivating not just to be involved with aquaculture but to be working in the marine environment," Barker says. Fischer adds, "I'm like George Bush senior - he wasn't real good on the visioning stuff, and I think I'm in the same boat." I laughed and continued to snap photos while thinking about the fact that we were also in the same boat. "But I certainly saw it as quite fascinating to know how this works on the growing end," Fischer continued. They knew from the beginning that their success would depend on the market for seaweed, which was questionable at first. "It is certainly a food that most of my acquaintances when I bring it up go, 'Ew,' so that's a pretty tough starting point." But since then, the seaweed market has grown exponentially, catching on not only with friends, but chefs and snack companies. 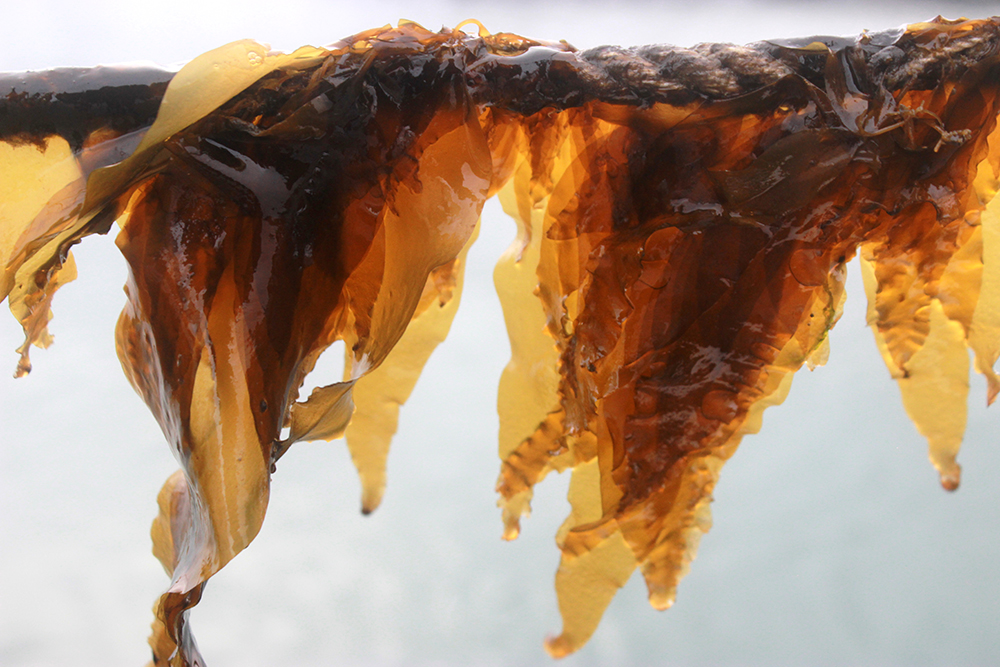 We arrived at the mussel "farm," a structure made of wood and hooks and ropes. The seaweed side of the operation was even less conspicuous: some ropes strung between buoys, easily missed if you didn't know what you were looking for. When the rope was pulled up to reveal the seaweed, it hung down like prayer flags, golden brown, translucent, and gelatinous.

They knew from the beginning that their success would depend on the market for seaweed, which was questionable at first.

After winning a federal grant, Fischer and Barker began to approach restaurants in "foodie city", aka Portland. They had fun and made sales, but the orders were not huge. They've sold to restaurants from Portland to Rockland, but they are focusing on expanding their production of dried seaweed and creating products that can sit on store shelves. "People seem to more and more want to know where their food comes from and maybe getting a little freaked out when they do find out," Fischer says. "So if you have a product that's easy to show people where it comes from, no convoluted supply chain, and showing that it's from a sustainable, safe source, that's seeming to become more important to people." Their goal isn't to feed the world and grow into a billion-dollar business, but to simply contribute to local food production.

As Fischer explains how the team dries seaweed in their 'dry house,' a converted greenhouse in Fischer's backyard, he shares that he puts dried sugar kelp on his food in place of salt because there's "so much good stuff" in it. Unlike most Maine businesses, most of their work takes place in the winter, an advantage because there are fewer people around. "The bottom line is less people, less people's shit going in the water, you know?" The seedlings are planted in the water during the summer and then harvested in the spring. Everything has to be removed before the subsequent summer season to prevent a process called "bio-fouling." Then the seaweed goes into the dry house and is prepared for distribution. 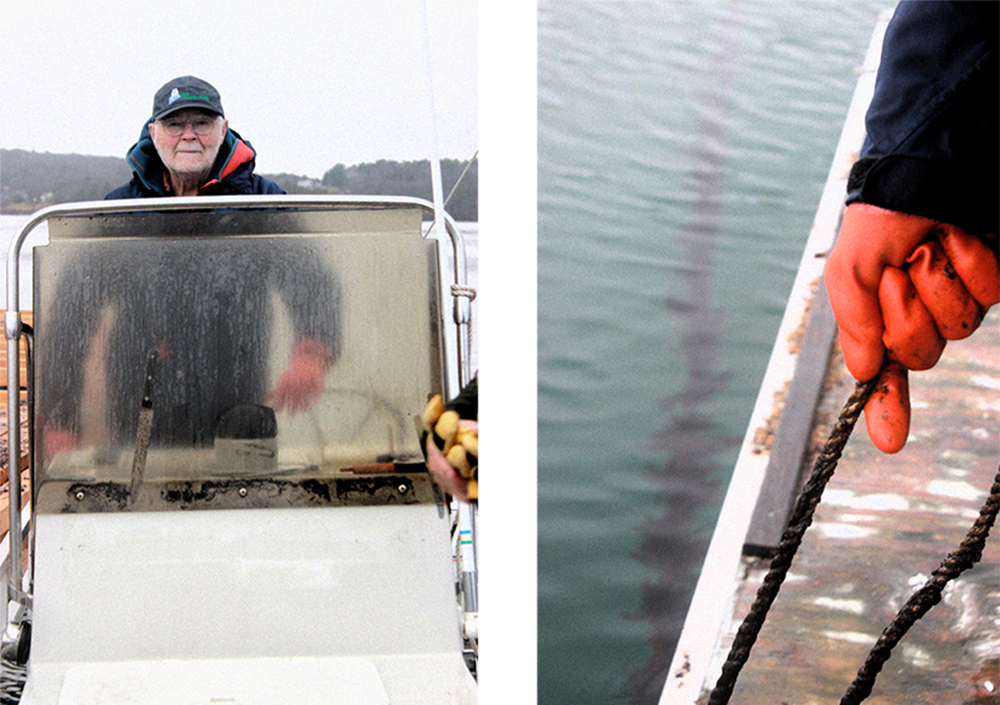 "We're not sure what we're going to do this year, because of the virus concerns." During our follow-up phone conversation I asked Fischer about how the pandemic is affecting their business. "I have to admit that it's very different right now that everyone's being forced to eat at home...but I've always worked at places where there's not eighteen stores or restaurants next door, you bring your food from home anyway...so it's a hard thing for me to wrap my head around." I think of my dad, a lifelong Mainer, and his lunch that he used to eat out of the tailgate of his truck in the summer with his old water jug.

Their goal isn't to feed the world and grow into a billion-dollar business, but to simply contribute to local food production.

"Our orders for mussels went to zero at the beginning of last week," he adds, which makes my heart drop. I guess it makes sense, when their clientele is white-tablecloth seafood restaurants. "We're all in the same boat together so we're going to have to figure out ways to come out of this and find some semblance of a life we had before. But I think it will be different." I catch myself laughing again at his metaphor, and then quickly sober up. We agree that through all of this, from moving up here to starting the company and living through this pandemic, we're lucky to live in Maine. "You can go outside and not see another soul. We're very lucky!"

Evan Stevens is a 24-year-old artist and food entrepreneur from Boothbay, Maine who holds a degree in Visual Arts from Bowdoin College. Since graduating in 2017, Stevens has worked in photography, graphic design, social media, and started his own company selling greeting cards that include his original recipes and artwork. See more at happycookingcards.com