Land of Kush: A Baltimore Restaurant Sees the Future in Soul Food

Open the door to Baltimore, Maryland's Land of Kush on a cold winter day, and you'll be greeted with warmth and color. Steaming plates piled with delectable soul food staples-tangy collard greens, fluffy cornbread, and perfectly browned crab cakes-make their way from the open kitchen to the small storefront seating area, attendant aromas trailing behind them.

The liveliness of this rich and flavorful comfort food is matched by the energy in the room. Families at small tables and folks eating alone-together near the window fill the space with friendly conversation. Happy eating sounds bounce off of brightly painted walls hung salon-style with canvases featuring African animals ringed with glowing golden nimbi, a space goddess with an outsized afro, and a desert princess with an interplanetary womb. A large mural of an ancient palace courtyard with flying cars shooting across its sky overlooks the busy chefs in the kitchen.

Land of Kush is an award-winning vegan soul food restaurant offering multiple levels of comfort: on the surface, there is everything that makes your heart swell when you think of Southern food-hearty portions, smoky marinades, all-day rib-stickiness-but Gregory Brown and Naijha Wright-Brown, who opened the restaurant in 2011, are thinking deeper than a full belly and a serving of nostalgia. They are thinking about the health of their community, and the long-term impact of proving that plant-based eating can fill the same bowls - emotional, spiritual, and flavorful - as traditional soul food. In doing so, they are pushing the idea that feeding the soul needs to be done more thoughtfully. 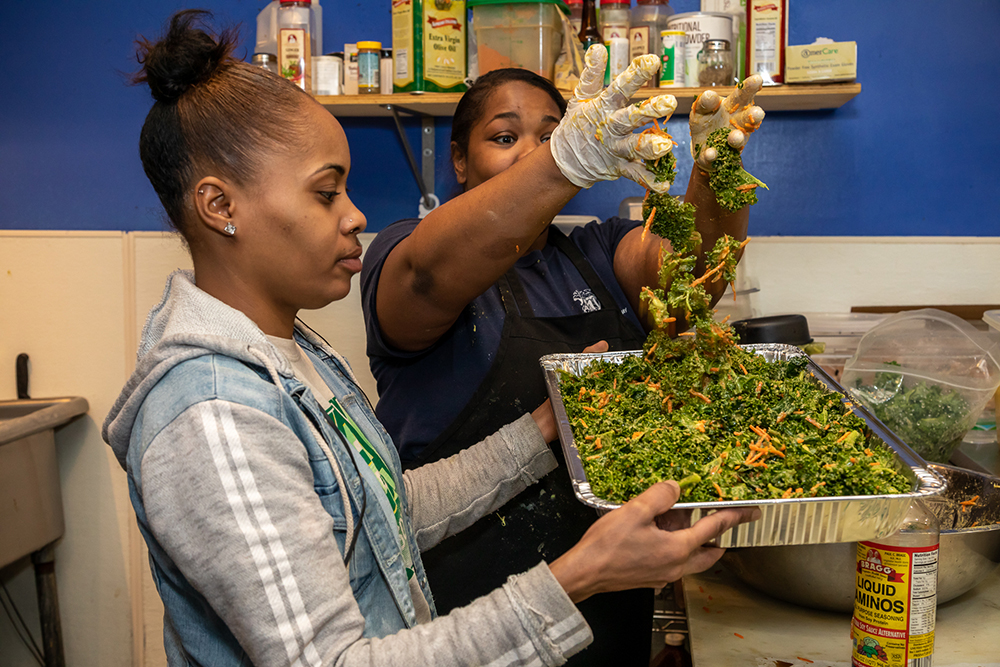 "We're trying to uplift people," explains Brown, who developed the restaurant's menu and concept, "Get people to think differently and view their world and their space a little bit differently and act upon that. Soul food has a historical context, but now, in the modern world, it has negative [health] connotations. So how can we make it healthy? How can we bring awareness to people?"

It begins, of course with the actual food. "You've got your collard greens, your yams, mac and cheese and your fried chicken," says Wright-Brown, who does Land of Kush's marketing and community partnership development. "We just take that and make things that are relatable to the demographic that we target, which is African American people and Latinos. People come in and question us, saying 'How are you gonna make collard greens without no turkey?' or whatever meats they were putting in. So we really have to show them." At Land of Kush, skeptics are encouraged to sample everything, she explains, "And then they just keep coming back!" 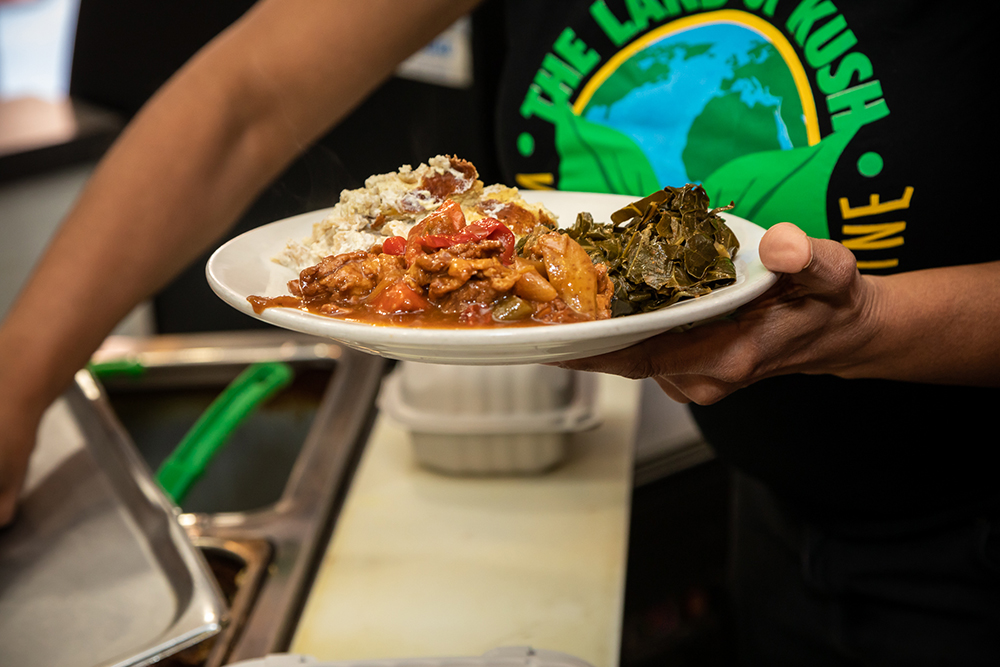 Creating a healthier, planet-friendly version of the food most beloved by their community is at the core of what Browns are up to, but how they've shaped the Land of Kush and the expansion of their work beyond the restaurant makes them part of a larger movement rewriting the definition of a gastronomic 'home' for African diasporic peoples. Though people come to the Land of Kush for the food, it's for more than that, Brown insists. The restaurant, named for the powerful African empire of Kush, which ruled the Southern Nile valley from about 800 B.C. until 4 A.D., has a strong Afrofuturist emphasis, which represents, in Brown's words, "Taking charge of what our future and what our spaces look like, instead of letting society dictate what these things should look like. We think food should be different. We think our concept of eating should be different. We don't believe in killing animals, we don't believe in slaughter. We don't believe in breaking down our environment unnecessarily. And so that is a futurist idea."

Creating a healthier, planet-friendly version of the food most beloved by their community is at the core of what Browns are up to.

Ytasha Womack, writer, filmmaker and the preeminent voice of Afrofuturism explains why the movement has impact: "It's an artistic esthetic, but it's also an epistemology that creates self and community healing." How? Through the intersection of "black culture, technology, liberation, the imagination and mysticism." The Afrofuturist lens, she says, "is dynamic, which allows imagination and for the concept of possibility." 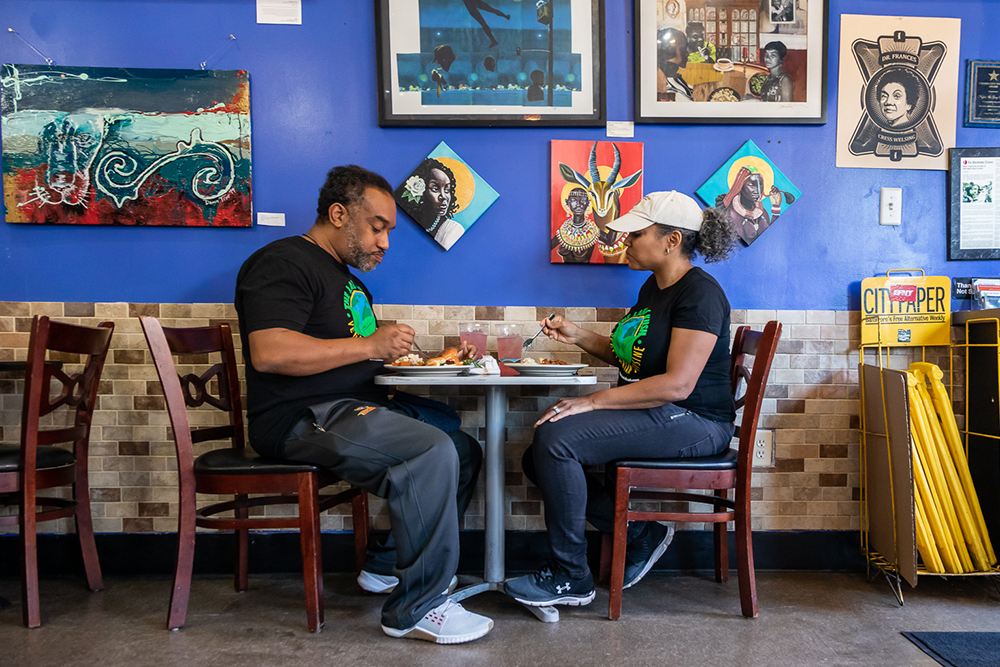 Naijha Wright-Brown and Greg Brown take a break for lunch during a lull in service. All of the art on the walls is by local artists.

The restaurant's Afrofuturist esthetic is meant to evoke a response in people, says Brown. "It plays into what the Land of Kush is and what it represents, and how we look at our space and our community, not just in the present modern world, but also for the future." Brown notes that the artwork also gets people "talking to each other outside of their own circles. You might come in with somebody, but it's a tight enough space where people feel comfortable having conversations with other people in the restaurant."

Shifting someone's eating patterns is complex. "If you suggest 'stop eating ham' or 'stop putting salt pork in your greens' people get offended because you're talking about these great meals and these great moments with grandma or great grandma. And you're denouncing all of these things that people did to make meals out of what they had." Womack notes. 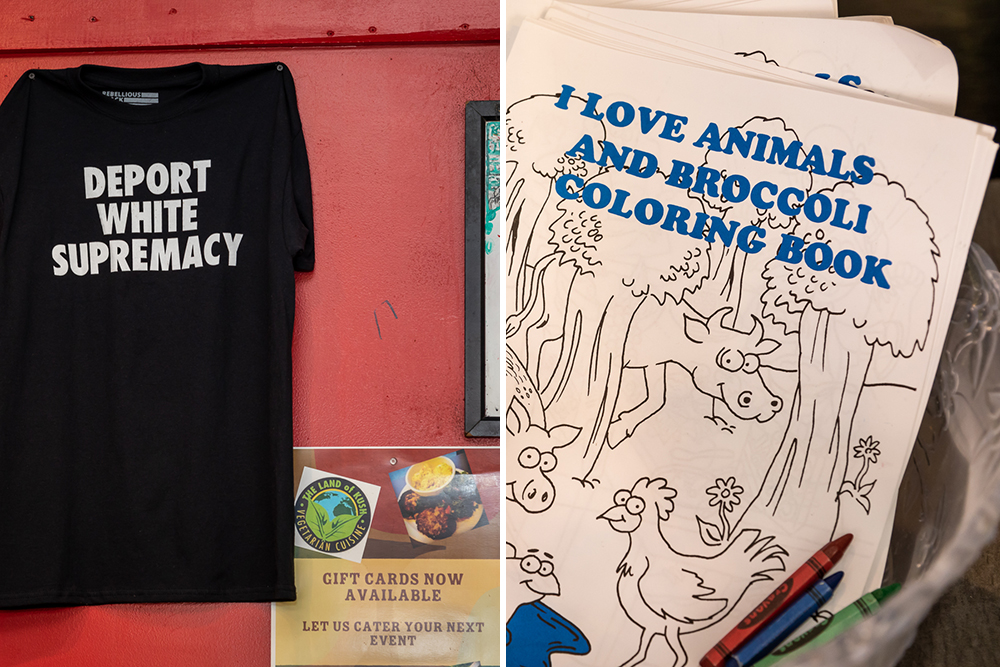 A t-shirt stands out amongst the artwork on the walls, and coloring books keep younger diners happy.

But, she reminds us, "The one thing that really helped people transition, foodwise, is that they saw it as being part of a community transformation because food is so cultural."

At Land of Kush, the flavors and textures and artfulness of soul food are being brought vividly into the present and re-imagined for the future, incorporating the passion and visions of mid-century activists who once rejected them. Vegan Soulfest, an urban, food- and music-filled festival, is one of several expansions of the Land of Kush's project that Wright-Brown has devised out of an abundance of love for plant-based eating and the wellbeing of people of color. It's taking off because people are excited for the future-a future where being of African descent means being healthy and happy and surrounded by community-and Vegan Soulfest, like Land of Kush, and vegan soul food itself, a celebratory model for that moment.

editor's note: This story was produced a few months ago, well before the COVID crisis was in full swing. We'd like to share the following up-to-date message from the Land of Kush:

We, at The Land of Kush, are concerned about the health, well-being and safety of our staff and customers.  We are here to meet the needs of our community during this public health emergency and will continue to serve our community, keep our current employees on staff and support the local #DiningAtADistance initiative by being #OpenForDelivery, carryout, pickup and catering.  Please show your support by placing an order for food, catering or an eGift card.  Our website is www.landofkush.com.Like many restaurants trying to stay in business these days, The Land of Kush is operating as a take-out and delivery only restaurant. Gift cards can be ordered online at their website landofkush.com

Heather Kapplow is an artist, writer, and creative consultant based in Boston, MA. Online haunts include www.heatherkapplow.com, @hkapplow on Twitter and @heather_kapplow on Instagram. Real life haunts range far and wide.

Lise Metzger is a freelance photographer based in Washington, DC. She writes and photographs the project Grounded Women: Stories of Women who Farm. She is a tireless advocate for a healthy and just food system, and as a CSA site host, she loves to connect people to the source of their food. You can find her at www.lisemetzger.com and www.groundedwomen.com and on Instagram as @groundedwomen.