"Working cooperatively is in our bones, it's in our blood. Caring for each other is part of our survival," says Steph Wiley. He stands on an industrial street in Brownsville, New York. The sidewalk is lined with empty wooden pallets and thick bundles of cardboard stacked waist high, evidence of a busy day at Brooklyn Packers, the Black-led worker owned food distribution cooperative that Wiley co-founded on solidarity economy principles.

a local regenerative food economy is not only sustainable, it's essential

The collaborative food sourcing, packing and distribution that culminates here is an integral link in an alternative supply chain that Wiley, 47, and other long-term residents of Central Brooklyn are building together essentially from scratch. Its growth during the pandemic is evidence that their vision for a local regenerative food economy is not only sustainable, it's essential.

Sunlight wanes behind the open warehouse gate where workers sweep up fallen kale leaves and stray radishes, the only visible remnants from a full day of packing. Long folding tables prop up plastic bins of locally grown vegetables - many from BlPOC and queer cooperative farms - that are sorted and packed with cartons of eggs, rice and dried beans. Every week, Brooklyn Packers assembles thousands of grocery bags that are transported to clients across Brooklyn for distribution through community farm shares and mutual aid food relief as well as to members of the Packers' own Brooklyn Supported Agriculture program. 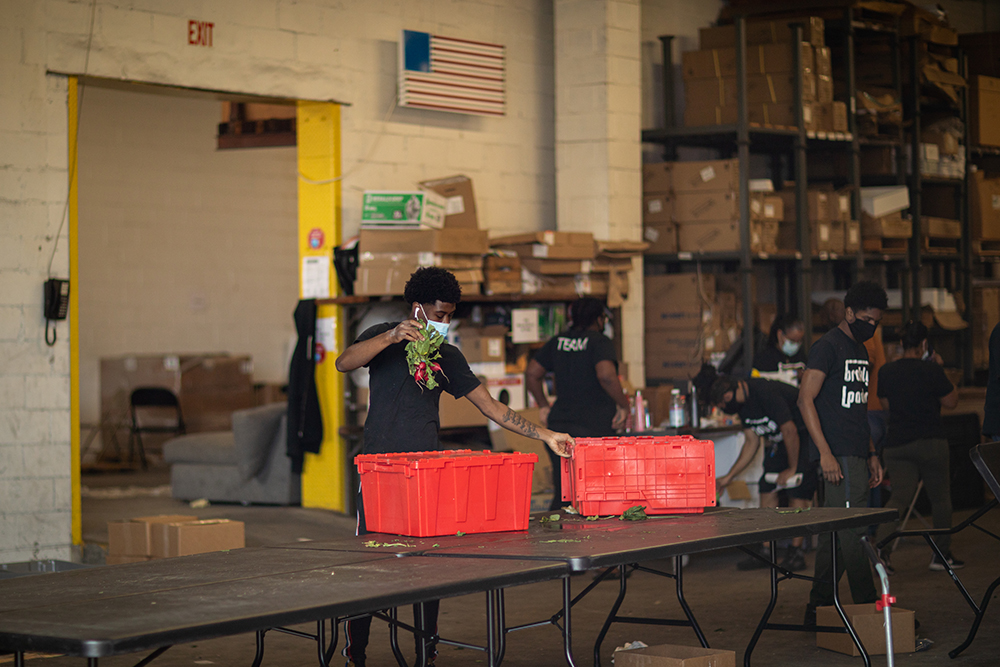 Clean up after a day of packing at the warehouse in Brownsville, NY.

Packing requires repetitive movement and heavy lifting which can easily become monotonous but the mood in the warehouse is light. Music plays over a loudspeaker as masked workers convene in a large circle for a standing afternoon meeting. After the pandemic hit, the team quickly grew from 3 to 6 salaried worker-owners who orchestrate daily operations and plan future growth, and over the summer hired an additional 20 hourly staff members from Brooklyn. There are now 4 women on the team, which is a rarity in the male-dominated field of packing and distribution. In the warehouse are mostly young Black men, several from Brownsville, a low-income neighborhood where residents have a long history of community organizing. Their advocacy around Black self-determination is shadowed by the fact that, compared to other New Yorkers, they live disproportionately short lives due to codified inequality in local and federal government policies through redlining, neglected public housing, racist policing and subsequent mass incarceration. COVID-19 has exacerbated pre-existing economic disparity, sending the highest unemployment rates in the city soaring.

Amidst buoying infection rates, some of the nation's lowest paid workers are employed in the food industry and have been tasked with the most dangerous jobs void of workplace protections, hazard pay and healthcare. "We've been able to give people jobs in the middle of a pandemic when billions of people are out of work," says Raina Kennedy, 30, who is a worker-owner in charge of sourcing from farms and other food producers. Sharing ownership in the company meant that she was able to jump in immediately, take on responsibilities and develop a role based on her skillset. Kennedy joined Brooklyn Packers in 2018 after becoming disillusioned with the food retail space where her labor was required but her expertise wasn't valued. Even with an employee discount, she couldn't afford to buy groceries from the same specialty stores that employed her. "Workers aren't typically treated with respect and they don't get paid enough, especially in food packing and distribution," she sighs. "But it doesn't have to be that way." 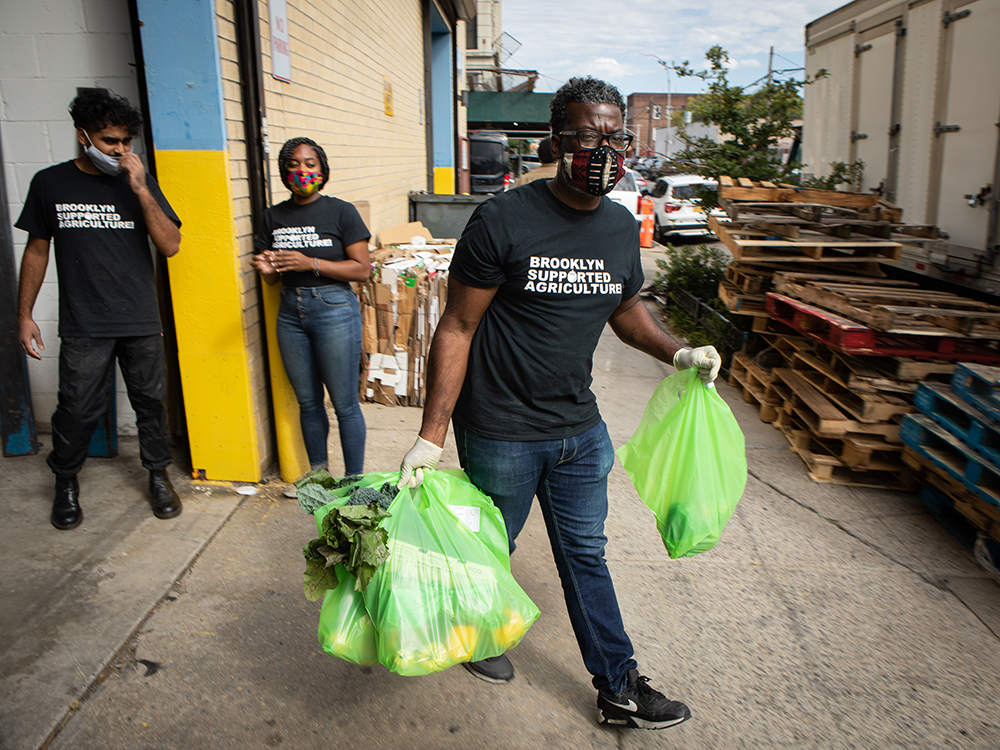 The idea for Brooklyn Packers was born out of a worker-owner cooperative training led by The Working World that introduced Wiley to cooperative economics while he was employed at Nextdoorganics in 2015. The training sparked long conversations between Wiley and two of his coworkers about what it would look like for the means of production to be owned by workers at every level of the food supply chain. As the start-up that employed them began to shutter, they started drafting the blueprint for what would be Brooklyn Packers.

most grant funding is designated for nonprofits, not cooperatively owned for-profit businesses

"If people were able to collectively own their own businesses, they would have more say in what happens to their jobs," says Ashleigh Eubanks, 30, who met Wiley just after Brooklyn Packers formed in 2016. For years, Eubanks has been developing a long-term food sovereignty strategy for Central Brooklyn as program manager of Riseboro's Central Brooklyn Food Democracy Project. She recently launched a Worker Coop Academy - inspired by the one that Wiley completed - hoping to incubate worker and consumer cooperatives from food co-ops and compost businesses to catering companies and food manufacturing, with Brooklyn Packers as a model for success that others can mirror. "This economy has been failing people for a really long time and now they're talking about alternative economies in ways that they weren't open to before," Eubanks says excitedly. "By focusing on smaller scale food systems, we can actually create the ecosystem we want."

Collective ownership is a strategy with particular salience among communities of color in the U.S. who have always had to generate revenue streams outside of an exclusionary economic system designed to accumulate wealth among white elites. Residents of Central Brooklyn trod the same ground where Black landowners and abolitionists founded Weeksville in the 1830s. The historic village was one of the largest free African American communities in the nation, organized around Black land ownership, with its own thriving self-determining food economy, school system, newspaper and businesses until urban expansion swallowed it up. Generations of white supremacist violence and discriminatory government policies have pushed the legacy of Black cooperative economics underground, leaving behind few guideposts for people to follow. Starting a cooperative today isn't just uncommon, it's saddled with a sharp learning curve and little institutional support since most grant funding is designated for nonprofits, not cooperatively owned for-profit businesses. 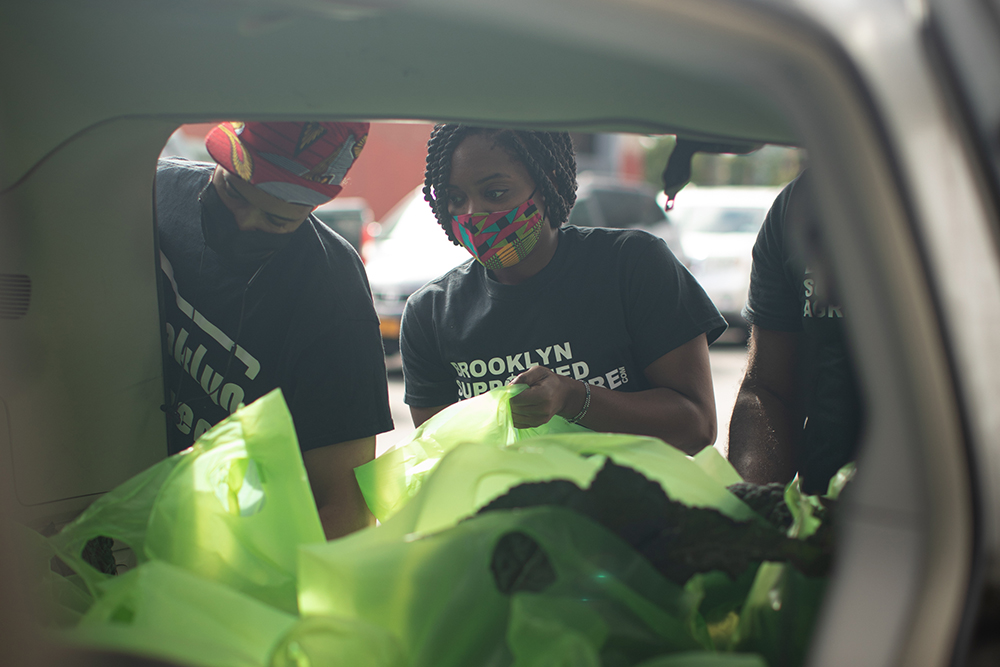 "We've seen this neighborhood redlined not only in terms of financial services but retail services and food," says Mark Winston Griffith, the director of the Brooklyn Movement Center (BMC). "There is this sense that we cannot feed ourselves because we are always the consumers and never the beneficiaries of economic gain created through sourcing and distribution." Griffith, a 57-year-old community organizer who has worked for decades to combat the myth that cooperatives are for privileged white people, has collaborated closely with Eubanks and Kennedy to launch BMC's Central Brooklyn Food Co-op, where all three colleagues are organizing members. The Food Co-op is slated to open next spring and will work with Brooklyn Packers to stock its shelves with products from local food producers.

The world of Brooklyn Packers, Riseboro and BMC is a network of interconnected relationships that Griffith likens to being "professional cousins, in the sense that we are all part of a shared conversation around food justice, food sovereignty and Black-led self-determining food economies." At the heart of those conversations is an assurance that long-term Black residents be the decision makers and beneficiaries - a commitment that requires prioritizing relationships over linear growth. 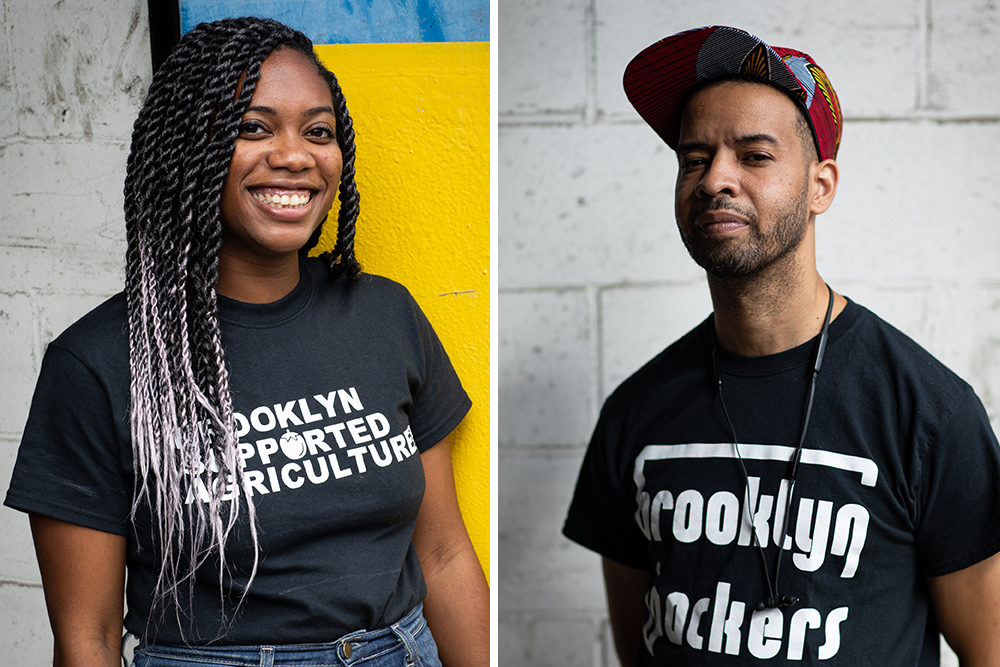 Raina Kennedy, 30 (left), and Steph Wiley, 47 (right), are 2 of 6 worker-owners who have collectively built a business on the principles of solidarity economics.

In the wake of the pandemic, their deep roots in the community allowed the groups to quickly pivot to emergency food aid through the Food Co-op's #HoldDownBK free grocery program, which tapped into the Packers' wholesale network to source and distribute high quality produce for community members while giving them a taste of the cooperative model. Operating on the wholesale level has been an effective strategy for BMC to mitigate hunger in a forward-thinking way. It has also galvanized local mutual aid groups led by non-Black newcomers who would otherwise do individual grocery store runs to buy food for neighbors, "which was not particularly safe or affordable," Griffith recalls. BMC has helped connect them with Brooklyn Packers to stretch donations and reinvest their dollars locally instead of losing them to global corporate commodity chains. But mutual aid efforts that focus on short-term relief instead of long-term abundance feel like charity to Griffith because they create dependency and "don't help the people who live here feed themselves any better than they did before" once privileged volunteers lose steam. Even the wokest charity model still perpetuates the binary of haves and have-nots much like how capitalism necessitates the distinction between producers and consumers, owners and workers, gentrifiers and the gentrified. By design, peer-to-peer cooperative models flatten social hierarchies in order to share responsibilities and resources among all members, from each according to their ability, to each according to their needs, as the Marxist adage goes.

If you can't be what you can't see, then shared ownership needs visibility along the entire food supply chain beginning with its origins in the soil. "The only way that we're going to be 'free' is to have our own land to grow food, house people and build community," Wiley tells me over the phone from a hotel upstate where he and his family are living temporarily and commuting into the city as needed. To feed all of Central Brooklyn requires more Black-led cooperative farms than currently exist and Wiley is prepared to get his hands dirtier.

The vision of cooperative ownership in Central Brooklyn is bigger than what a single warehouse on an industrial street in Brownsville can hold, Wiley reiterates. "Food is the vehicle, but the goal is to change the system by creating our own."

Leah Kirts is a writer from Indiana based in New York covering food, queer politics and ecofeminist veganism. Connect with them @leahkirts

Clay Williams began photographing food and drink for blogs, newspapers and magazines in 2006. In the years since, he's hung off the back of food trucks in Paris, sweat it out in tight kitchens with Michelin-starred chefs and wandered through cattle farms with a team of butchers. He photographs assignments for The New York Times, The Wall Street Journal, The James Beard Foundation and Imbibe Magazine among others. Clay is also the co-founder of Black Food Folks, a platform for Black professionals working in food, food service and food media. The group has provided a space for members to meet, network, collaborate and tell their stories.