The Land We Live On: Cultivating Connections Through Indigenous Ingredients at Wahpepah’s Kitchen

In the dining room at Wahpepah's Kitchen, your eyes are immediately drawn to a bright yellow wall of shelves displaying an assortment of glass jars, each filled with seeds in varying shapes, sizes and colors. As beautiful as they are, these seeds are not merely decoration - they have an important role to play in guiding those who dine at the restaurant to consider the ground beneath their table and the food set upon it.

"I want people to see what they eat and where it comes from and how we save our seeds," says Chef Crystal Wahpepah in describing the decision to give seeds a prominent place in the restaurant, which is located on Ohlone land in Oakland, California.

For Wahpepah, who is the first generation in her family to be born in Oakland and is a member of the Kickapoo Nation of Oklahoma, the desire to bring people closer to food in this way is rooted in a history that extends far beyond the farm-to-table trend that has become popular in the Bay Area in recent years. 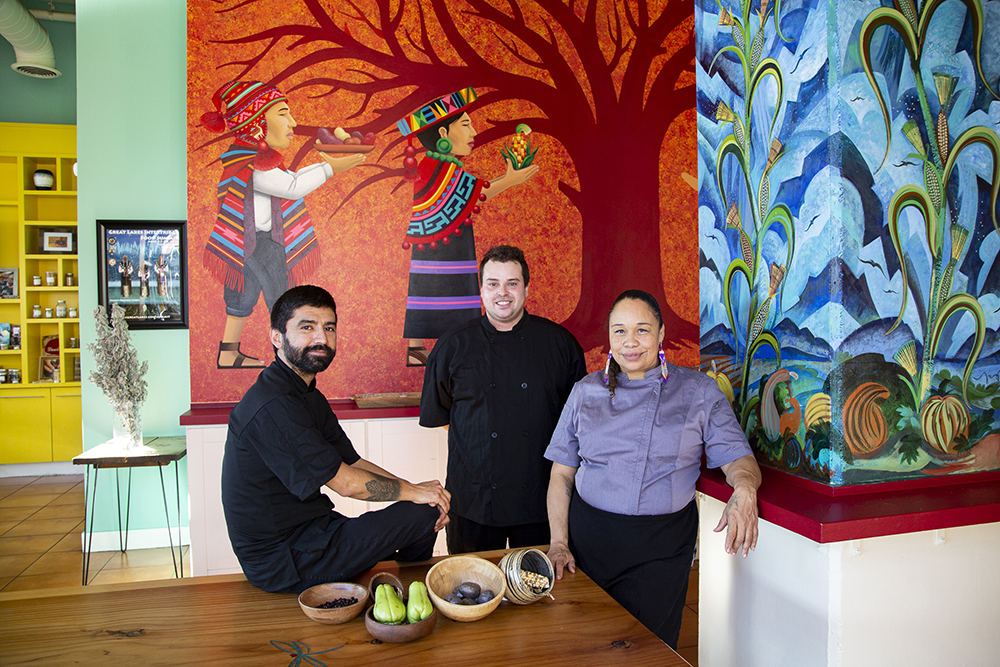 Growing up in a culturally diverse city with access to many different kinds of cuisines, Wahpepah recalls, "We would always have our own foods within my grandparents' and my mother's homes and within our community, but I always wondered why we don't eat Native American food in restaurants. After many years, I realized it has to do with historical trauma and colonization. There's so much history of how these foods got lost and why we eat what we eat."

That history spans the last five centuries, during which time European colonizers violently displaced Native American tribes from their ancestral lands, thereby destroying and endangering thousands of years of Indigenous food traditions. Any Native seeds, as well as culinary and agricultural knowledge, that remain today have been carefully protected and passed down over generations. 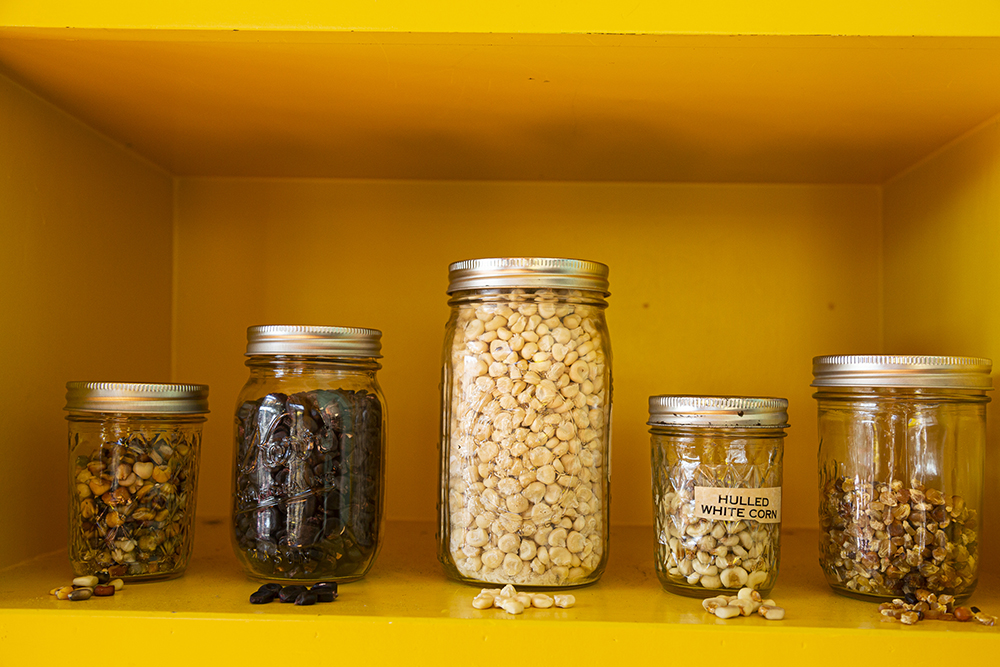 "I always gravitated toward Native American food and I took it upon myself at a very young age to want to know more," says Wahpepah, who started cooking when she was seven years old. "I ended up getting recipes that were passed down to me by my grandparents and my aunts, and I'd be asked by my family to make the traditional corn soup that we grew up with."

Wahpepah, who did not originally aspire to be a chef, describes the sequence of events that led to opening the restaurant in November of 2021 as "a beautiful, hard journey." Over the course of twenty-five years, she went from cooking the occasional meal for her relatives to feeding hundreds of people in a day.

"One thing led to another and I was the person that they would call up to make Native foods," explains Wahpepah about family, friends and eventually businesses across the nation who requested Wahpepah to cater events specifically because of her reputation as a chef with a deep understanding of Native cuisine. 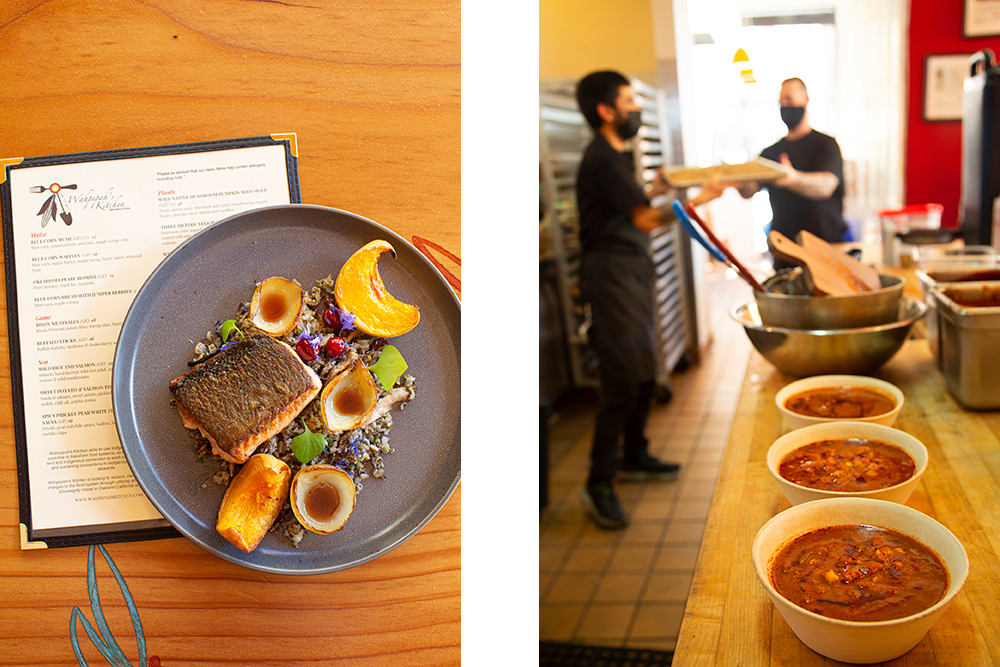 (left) A dish of wild rice and salmon with squash, elderberry, onions & wild mushrooms highlights the menu behind it. (right) In the kitchen, generous bowls of Kickapoo Bison Chili wait to be dipped into with heirloom blue corn bread.

For more than a decade, Wahpepah's Kitchen thrived as a catering company, but in 2020, the shared commercial kitchen where Wahpepah cooked was forced to close as a consequence of the Covid-19 pandemic. "All my catering came to a complete stop, but I wanted to continue this mission that I was on," says Wahpepah. "I felt in my heart that it was time for my community to have a space."

That space became the brick and mortar version of Wahpepah's Kitchen, which serves, in Wahpepah's words, "a rich, vibrant Native community" that consists of "over 100,000 Native Americans from different tribes" in surrounding urban neighborhoods. She emphasizes that the restaurant is the result of "a lot of hard work and many years. This was not something that was taken lightly."

Wahpepah's years of effort and experience not only cooking Native foods, but also engaging in conversations with Native and non-Native people about these foods led her to define the three objectives that guide Wahpepah's Kitchen: "(1) to acknowledge that we live on stolen land; and (2) how that acknowledgement connects to the reclamation of Native food ways (food sovereignty); as well as (3) to educate communities and organizations on the health benefits of Native food ways." 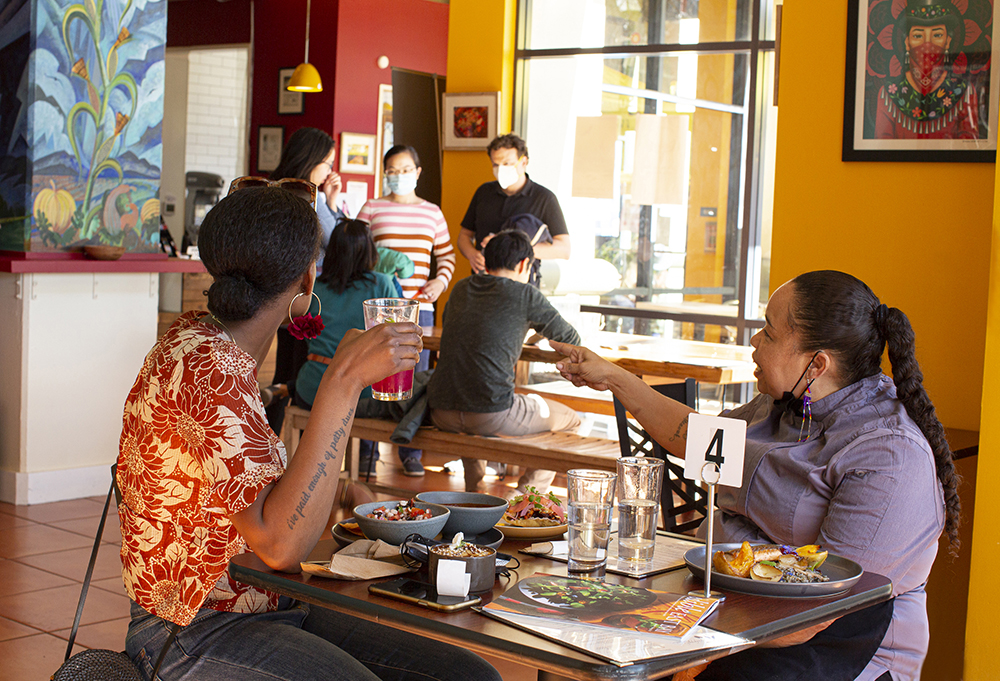 Thanks to Wahpepah's meticulous sourcing of ingredients from Native communities, every dish on the menu offers an opportunity for those dining at the restaurant to learn more about Native foods and support Native growers. In doing so, Wahpepah is directly contributing to the continuation of Indigenous agricultural and culinary traditions, as well as aiding the movement toward food sovereignty among Native people.

"Our blue corn comes from the Ute Nation [in the Southwestern United States]. Our acorn is freshly milled from the Mono Nation, which is in the Fresno area. We have hand-harvested wild rice that comes from Minnesota. Our maple is from Michigan," Wahpepah says of just a few of the ingredients currently featured on the Wahpepah's Kitchen menu. She adds, "All of these connections took me many, many years; they didn't just come overnight." 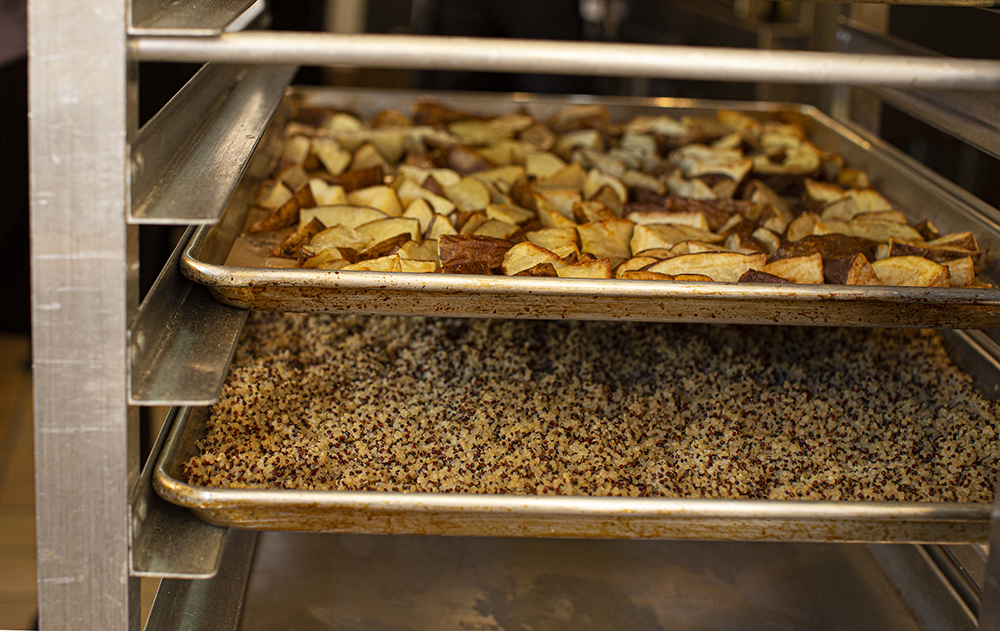 The kitchen turns out trays of roasted russet potatoes and three colored quinoa.

Wahpepah's dedication to forming relationships within the nationwide Native community is not limited to the restaurant's food suppliers. Soon after opening, Wahpepah began a collaboration with a Native art and activism collective known as NSRGNTS to paint a mural on one of the walls at Wahpepah's Kitchen about historic Native foodways between South America, Central America and North America. Speaking of this project, Wahpehpah remarks, "I've been having a lot of people from the Native community wanting to give somehow and that tells me that I'm on the right path."

Of particular personal importance to Wahpepah is the relationship that she has fostered with Ramona Farms in Arizona, which supplies the red heirloom corn for the Kickapoo chili (based on her grandmother's recipe) that she prepares at the restaurant.

"They're one of the oldest tribes to hang on to their heirloom corn," Wahpepah explains about the community at Ramona Farms and notes that this corn and many of the other ingredients she sources for the restaurant are often only available in limited quantities for brief periods of time. "If there's six bags of corn available, I'll get those six bags and we'll use it. That's why when you come to Wahpepah's Kitchen, you won't see the same thing over and over - you'll see what's in season." The constantly changing menu is not a result of the chef chasing seasonality for the sake of being trendy, but rather an indication of the scarcity of some Indigenous ingredients resulting from generations of systemic oppression, including barriers to land access. 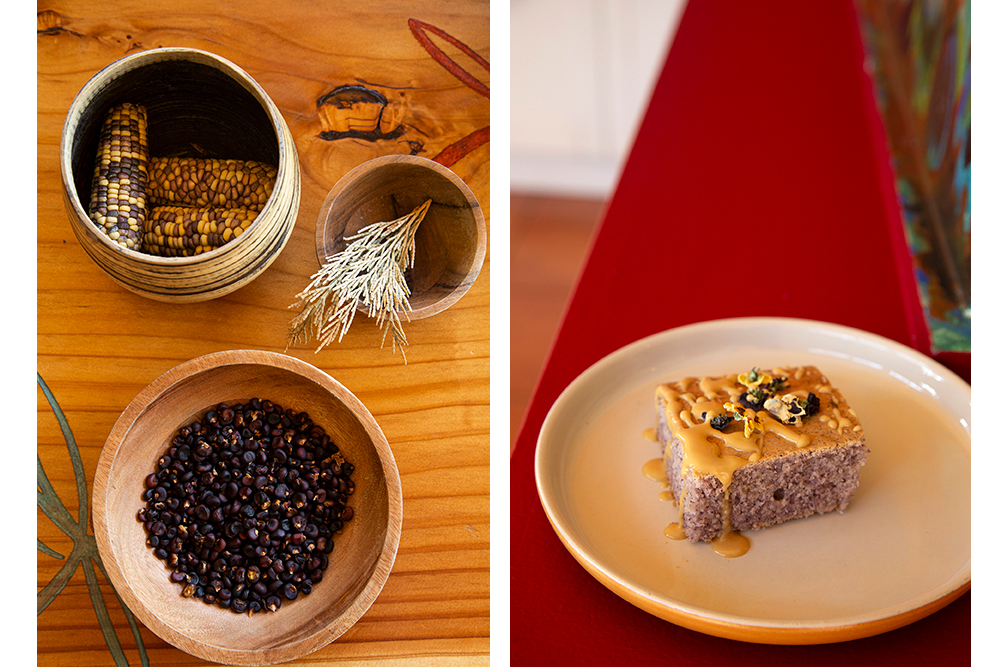 For some people, Wahpepah's Kitchen offers a chance to encounter certain ingredients for the first time, and for others the restaurant is a space for reunion. "I talk to some people and they say, 'I haven't had blue corn since I was eighteen!' And they're thirty," says Wahpepah. "I have people coming from all over that haven't been on their reservations or around their Native people in a long time."

Having a space to gather and share a meal that has been grown and prepared by Native Americans is both unique and invaluable in building a more hopeful and healthful future for Native people.

"Our food is that connection that we have to have for our community to heal," says Wahpepah. "I have grandmothers coming in here crying and saying in their lifetime they never thought they'd see a Native American restaurant... Sometimes it's really trying, having a restaurant, but when I hear that, I know I've done my job."

Only a few months have passed since Wahpepah's Kitchen welcomed its first guests, but already Wahpepah is looking to the future. She hopes that her hard work will inspire the opening of other Native American-owned restaurants. "Growing up, I would've loved to see a Native American restaurant. This is what I want our youth today to see and hopefully we'll see more" says Wahpepah. "We have to make it known to our future generations that we're here and we're not going anywhere - and that we need them to carry this on." 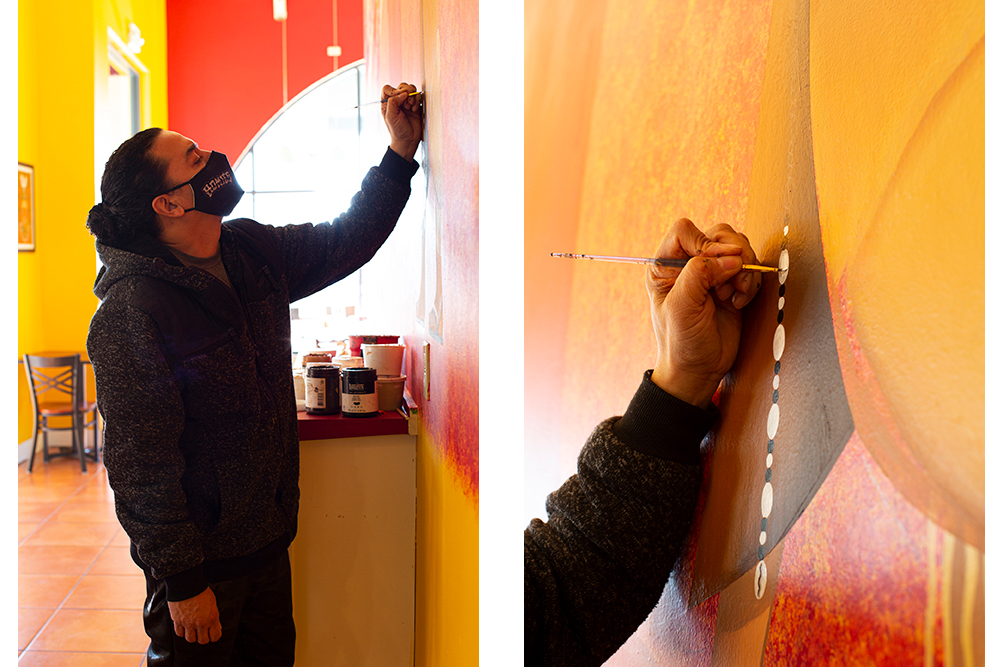 The seeds on the shelves at Wahpepah's Kitchen, like the restaurant itself, are a physical representation and reminder of all that previous generations of Native Americans have managed to carry on into the present moment, of the way in which something very small can grow into something very big (even in an inhospitable environment) and of how one person can impact the lives of many. However, what we see above ground in the sprouting of a seed or the opening of a restaurant is only part of the story; in the story of Wahpepah's Kitchen the roots are just as important.

Wahpepah's most profound contribution to the reclamation of Native food ways is the supportive root system that she has cultivated over years of forming relationships with Native farmers not only to sustain her own business, but to help the entire Native community to thrive. Through the use of Indigenous ingredients at Wahpepah's Kitchen, Chef Wahpepah connects people and place, returning our attention to the land we live on and offering a model for other restaurants to join her in working toward food justice for all.

Elena Valeriote is a writer who specializes in stories about food that demonstrate our collective power to create a more equitable and sustainable food system. With experience at many different links in the supply chain ranging from production to distribution, as well as hospitality, food policy, and beyond, Elena's holistic approach to food writing draws attention to the value of the land, plants, animals, and people that nourish us every day. You can learn more about her work at https://www.elenavaleriote.com/portfolio.

Norma Córdova is a Mexican-American artist, born and raised in Oregon by hard working Mexican immigrant parents. Her subject matter ranges from everyday moments of food, travel, and people, to femininity, self identity, and wonder. Her work has been exhibited in the US and abroad, and has recently been published in The New Yorker, New York Times, Vice, PDN, and Lenscratch. You can find her work at normacordova.com, shesaidred.com, and connect @shesaidred.

BACK TO STORIES
More stories in agriculture, culinary, education