Avery Cramer and the Garden Plot

The soil requires Avery Cramer's close attention. After mopping his brow, the food activist and avid gardener leans his back into his shovel to add a new layer of compost to a client's vegetable garden. However, he's not a hired hand - his main goal is to produce as much food as he can for as many people as possible, regardless of their economic circumstances.

Cramer is a self-styled urban farmer who saw an opportunity in a crisis. In 2020, his subscription-based gardening service grew from 5 to 20 households. Since then, the number of subscribers has more than doubled to 50, turning what many would consider a hobby into an enterprise that spans San Diego County. "By the end of the year, we want to be growing food on 100 micro-farms," Cramer says.

he intends to harvest 100,000 pounds of organic produce by year's end

Dubbing his efforts the Co-Harvest Foundation, he leverages the ample yards of San Diego's sprawling residential neighborhoods into vegetable plots capable of feeding scores of households and senior citizens living on fixed incomes. While tending garden plots ranging in size from a few dozen square feet to large residential properties, he intends to harvest 100,000 pounds of organic produce for human consumption by year's end. To reach that goal, he also plans to hire two additional staff members, doubling the number of CHF employees to four. 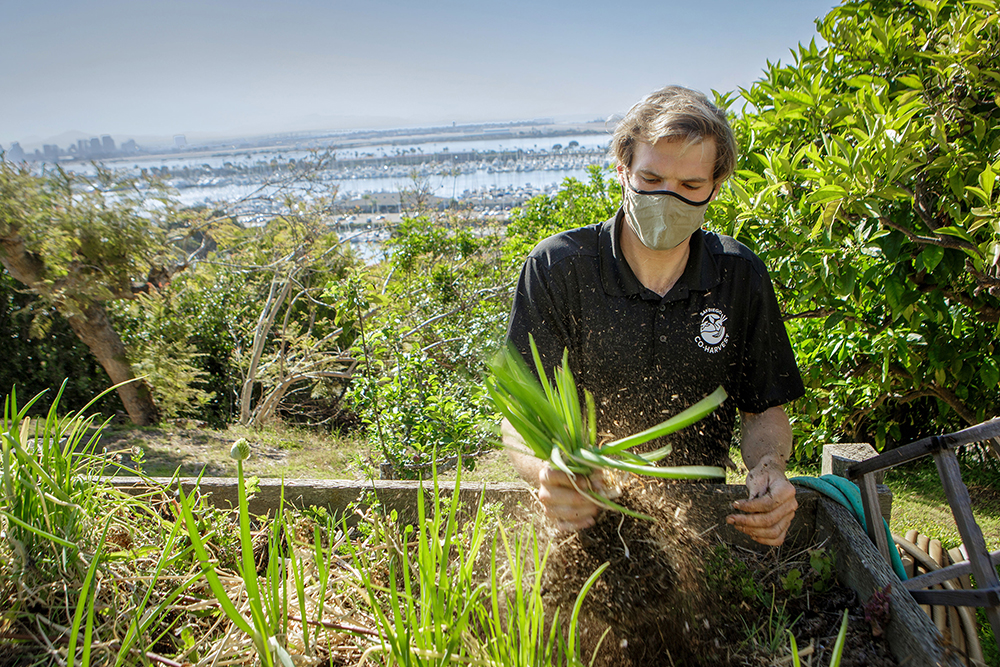 Avery Cramer, founder of San Diego Co-Harvest, pulls green onions that will be donated to a community refrigerator.

A little over two years ago, dissatisfied with his sales job in the renewable energy sector, he made other plans. Cramer launched the garden-to-table program with the intent of breaking the carbon intensive process of picking, packing and shipping fruits and vegetables over hundreds of miles. At the same time, he planned to feed households across the economic spectrum.

The premise is simple: cut the carbon cycle and nourish people. According to a recent study by the Intergovernmental Panel on Climate Change (IPCC), agriculture and other forms of land use produce 23 percent of the carbon emissions attributed to global warming. Climate experts contend that curbing carbon emissions is required by every sector of society to keep global temperatures from increasing by 1.5 degrees centigrade by the mid part of this century. This presents an all-hands-on-deck challenge for governments tasked with muting the worst aspects of extreme weather and rising sea levels. One possible solution to reducing the carbon footprint of the agricultural sector is to grow food much closer to metropolitan areas where the majority of people reside, worldwide. 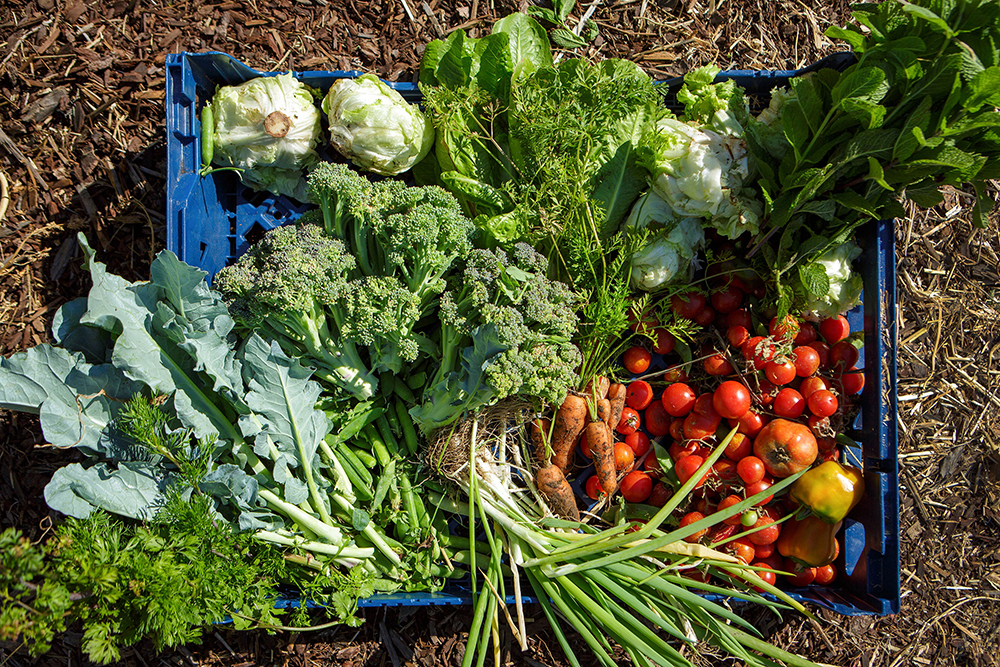 In addition to concern over global warming, another issue hits even closer to home: food security, defined as the state of having reliable access to a sufficient quantity of affordable, nutritious food. While CHF provides a turnkey solution to the labor intensive process of installing a vegetable garden for clients short on time or energy, charging a modest fee to convert yard space into raised vegetable beds, members are expected to donate 51 percent of the cornucopia of fruits and vegetables grown on their property to a food bank and to compost their green waste onsite to amend the soil. This twist creates an exchange that benefits individuals, communities, and the planet.

"We measure our success through the four pillars: health, environment, education and the jobs we provide," Cramer said.

Founded as a nonprofit organization, the tax designation allows CHF members to treat their participation in the co-op as a tax deduction, which in  turn covers the business's operating expenses and the salary of Cramer's one full-time employee. 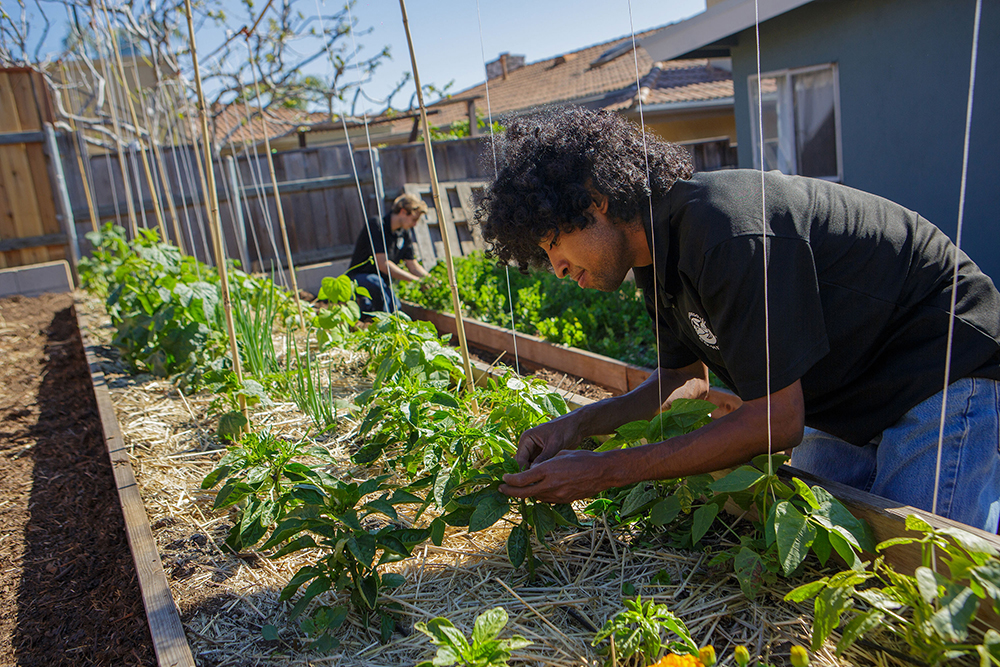 Cramer also keeps operating costs low by partnering with local organizations whose missions intersect with CHF - from a community-based composting program to local social services agencies focused on feeding people. Compost, construction materials and plants are donated, enabling Cramer to install vegetable beds at minimal expense.  "We want to partner with as many grass roots organizations as possible, so we're distributing food in a variety of locations," he shared.

In doing so, he's joined legions of food activists attempting to tackle food security by creating neighborhood-supported food systems, including Fleet Farms in Orlando, Florida and New Roots Urban Farm, which creates edible landscapes in overlooked and often underutilized spaces, such as neglected yards and vacant lots. Although the methods to accomplish these objectives vary from place to place, the result is helping communities to flourish through collaborative effort. 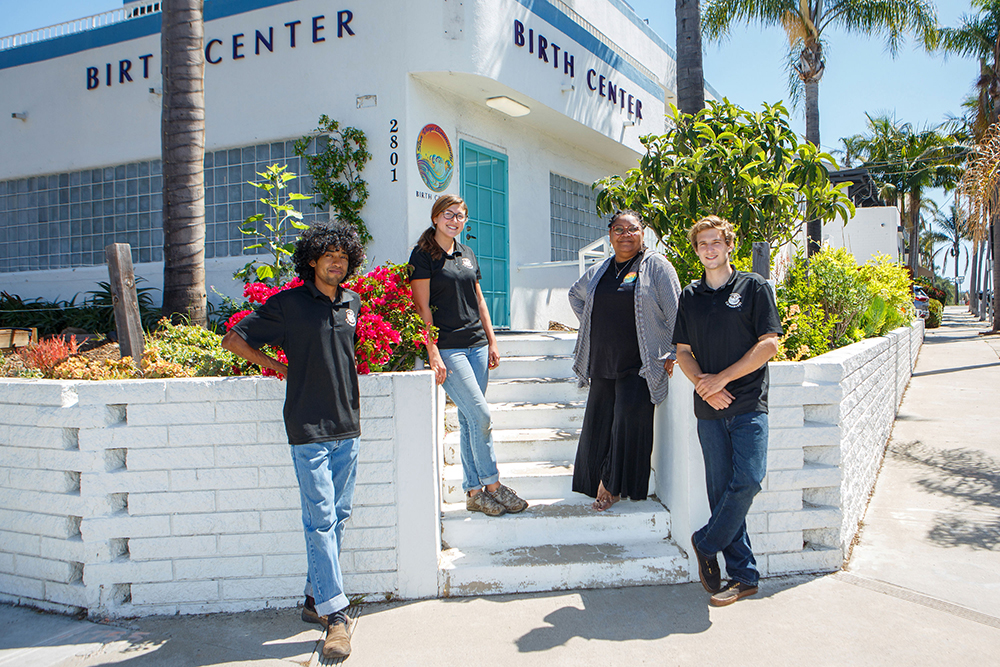 (From left to right) Marcus Slaughter, Isabella Alesandrini, Nikki Helms and Avery Cramer stand in front of the Birthing Center. Helms is the Director, and a Midwife, of San Diego Community Birth Center, which has partnered with San Diego Co-Harvest to provide healthy food to expecting mothers and the neighboring community.

In San Diego, neighborhoods located a few miles apart reveal the stark contrast between households. In affluent coastal communities, the large homes of prosperous families dominate the landscape. On the other side of Interstate 5, the circumstances of people's lives are vastly different. Drive inland a few miles and access to affordable fresh produce isn't a given. In fact, many households in San Diego struggle with getting enough food to eat and making the rent.

At least twice  a month, Cramer delivers fresh bags of produce grown in the hills of leafy Pt. Loma to the Bayside Community Center located in Linda Vista, which serves a low-income neighborhood composed of immigrant families.

The CHF "plugs in perfectly with the work at Bayside because so much of what we do revolves around food insecurity and empowering people to grow their own food," said Kim Heinle, executive director of Bayside, as she held aloft a bag of groceries packed with vegetables recently harvested by CHF and hand delivered to the community center for distribution. 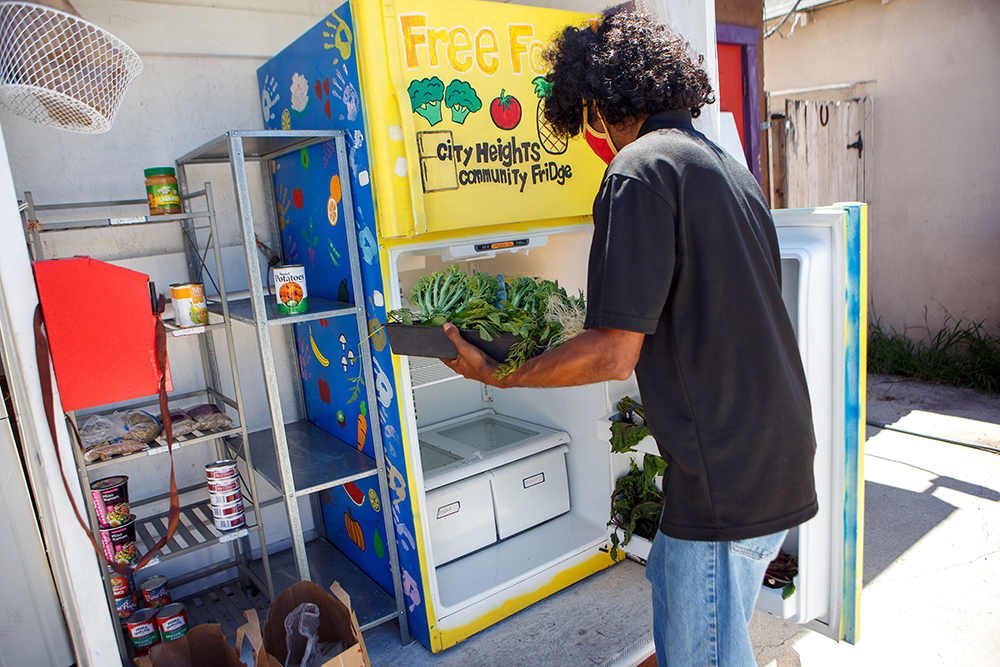 Marcus Slaughter stocks the local community fridge with fresh produce from the gardens of Co-harvest partners.

Although the pandemic has subsided, the public health crisis exposed chronic inequities in the food system. In the United States, approximately one in five households experience food insecurity on a regular basis. A report published by the San Diego Hunger Coalition indicates one in three residents experiences food insecurity on a daily basis. Despite the best efforts of food activists like Cramer to address food security, the data indicates a lot of work remains to be done.

The CHF framework is an example of what's possible outside of the existing model for how food is grown and distributed in the United States. But it has the potential to blossom, if more urban areas and consumers were to embrace it, and if individuals like Cramer are willing to break ground. 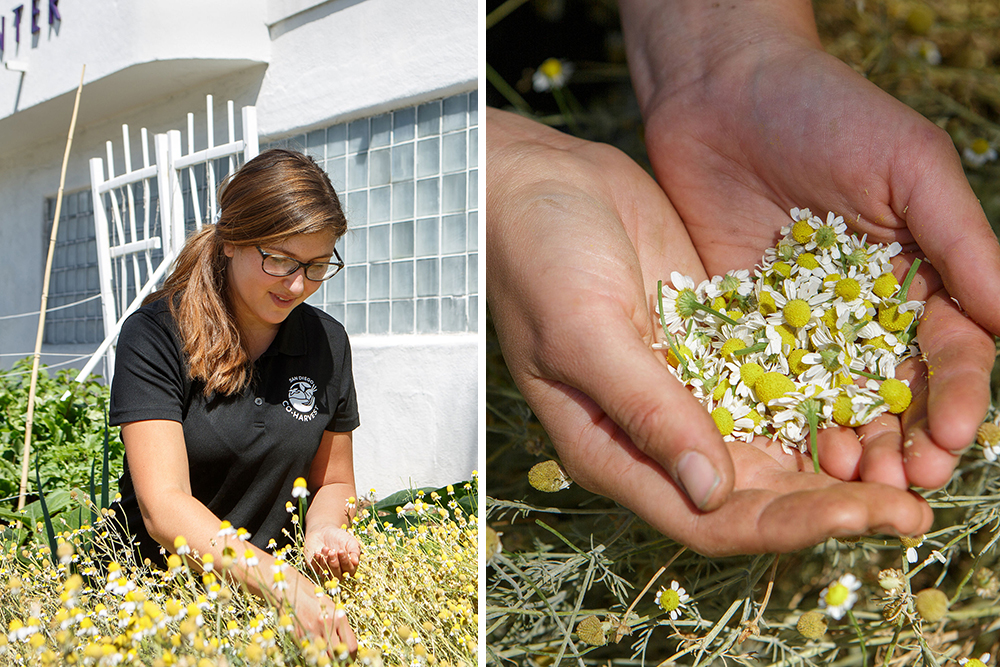 Enrique Gili is a freelance writer based in San Diego covering environmental issues in the Southland and beyond.  He focuses on the intersection between nature, science and technology with a twist of food politics. Bylines KCET, BBC News, DW Global Ideas and Zagat, among others. Twitter: @gili92107

Amanda Lopez is a Mexican-American portrait and editorial photographer based in Los Angeles. Whether she's on assignment or photographing members of her family or friends, Lopez's camera eye looks for a balance of beauty, strength, and tenacity. Her work has been published in TIME, The Washington Post, and The New Republic. You can connect with her on Instagram @snapshotlopes and see more of her work at www.amandalopezphoto.com

Additional Resources:
A Food Insecurity Map of San Diego
A Report on Climate Change by the Intergovernmental Panel on Climate Change
On Urbanization by Hanna Ritchie and Max Roser for Our World in Data

BACK TO STORIES
More stories in agriculture, business, nonprofit