Hill Wild: In a Lush Corner of India, a Chocolate Oasis

When Zeinorin Stephen was a little girl growing up in Ukhrul, Manipur - a lush, mountainous region in India's Northeast corner - she remembers stuffing her pockets with Karathei, a bright prickly orange berry that grows in the wild. "You can finish an entire tree of these," she says, picking them in abundance to store in jars or to hand to friends that come over for a drink. "They are bright, beautiful and also unpredictable," she says about the berry. "Sometimes you get a sweet one, sometimes sour, sometimes bitter. These berries taught me to appreciate a variety of tastes." Stephen weaves tales of her escapades in Ukhrul's edible jungles as she walks around the farm with her husband, Leiyolan Vashum. She points to wild peppercorns, bunches of avocados growing on skinny trees, bright plums fallen on the ground, well-fed chickens that run around a large pen, a local variety of garlic that she planted with Vashum that is "half the size of other garlic, but twice as tasteful."

"Till now, not many know what this region is capable of."

Stephen and Vashum are the founders of Hill Wild, a chocolate brand based in Ukhrul that makes chocolate infused with the local ingredients of the district. Their chocolate bars are infused with things like pumpkin seed, Siv?thei or king chili pepper (also known as 'ghost chili'), a peanut native to Burma, a local wild apple they call theithukthe. The chocolates are delicious - dark, soft and created in packaging that has grabbed the attention of locals in Manipur and beyond - but they are also an effort to do something more, to create, in Stephen's words, "Something that would have the essence of Ukhrul, but?new. People don't look at Ukhrul, or Manipur, and think of chocolate. We wanted to change that." 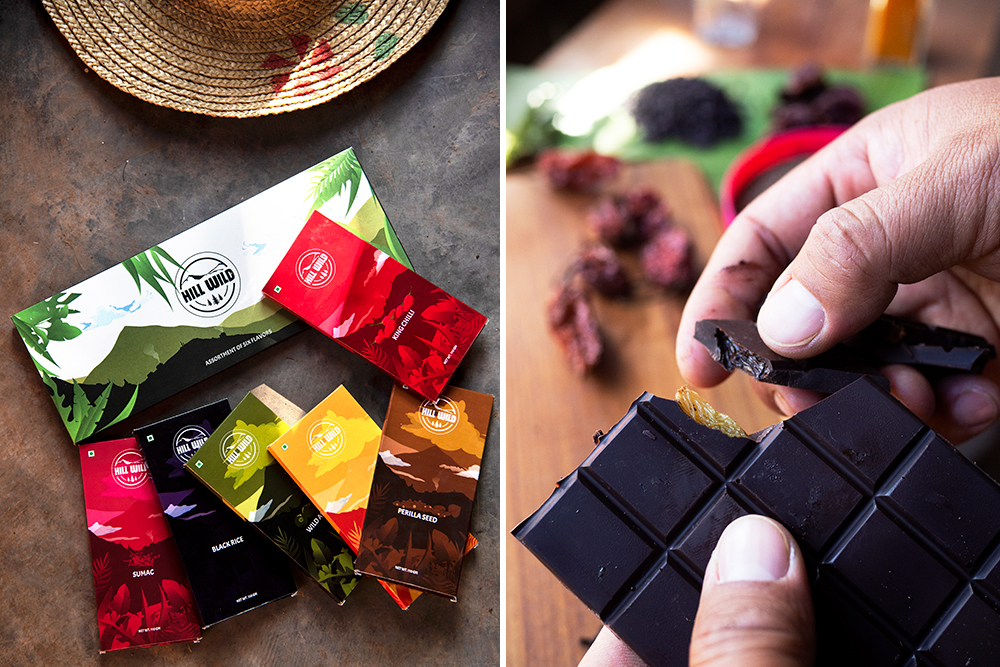 To make chocolate out of a region like Ukhrul is symbolic, Stephen says, as she arranges fresh bars in crumply silver linings, ready to be slid into the packaging that showcases the hills of the region its founders hold so dear. "It's a good way to introduce people to Ukhrul," says Vashum, "and Ukhrul to people outside it. Till now, not many know what this region is capable of. "

Ukhrul is a "hill district" in Manipur, a state in the eastern corner of India. Habited by the Tangkhul Naga tribe, to which Stephen and Vashum belong, the other communities in the state are the Kuki tribe, whose language and customs differ greatly from the Tangkhuls, and the Meiteis - non-tribals that populate the plains. Ukhrul is home to an abundance of plants, and sprawling mountains that turn gold in the winter light. It has been a site of conflict and insurgencies since India's independence in 1947. When the region was incorporated into the Indian state in 1949, movements towards separatism began, with guerrilla armies fighting against a state policy that ignores, dismisses and takes from indigenous peoples like the Tangkhuls. Ukhrul saw one of the densest insurgencies in the region's history. "You would see bombs exploding everywhere: from inside small bushes, in villages, in forests," says Vashum. 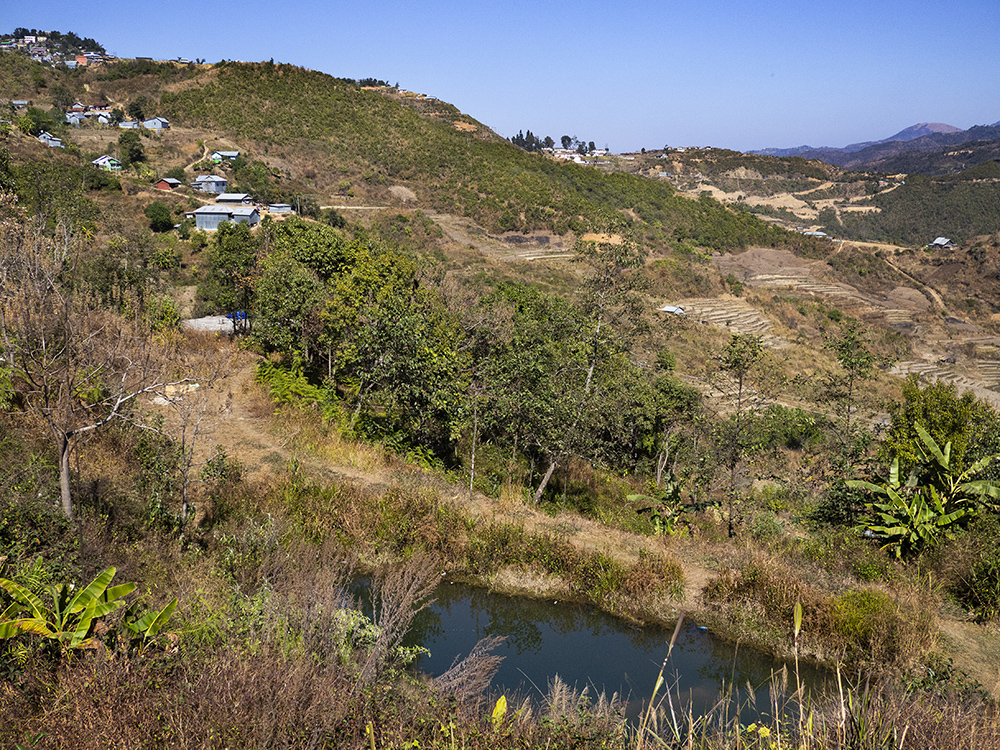 The view of Ukhrul town from Stephen and Vashum's farm in Manipur.

Militarization of the region has had a negative impact. Even as conflict has died down, the army is still present in Manipur. An Armed Forces Special Forces Act (AFSPA) is imposed on the region to allow the military, under the orders of the Indian State, to search and survey anyone suspected of terror. "It is because of things like these that the young people of Ukhrul have detached themselves from it," says Stephen. "There is no encouragement in agriculture, no initiative towards entrepreneurship, no incentive given to people to stay."

To make a Hill Wild chocolate is a long process, but Stephen and Vashum have settled into it with ease. To make a bar, chocolate is first treated, tested and melted into a mold before additional flavors are tinkered with, and finally packaged. The orders stream in: Hill Wild sells to retail stores and creates custom orders for events and weddings. But their biggest sales are still at festivals, where customers learn the ethos behind the product. The couple has also planted cacao all over their farm. "We are working on making it bean-to-bar," Stephen says. "We want to encourage others to farm some things for us too," adds Vashum. "Source from farmers, create a community around this chocolate. It builds hope for an industry here, and introduces a plant that can be brought to the region."

"One person cannot make change by themselves, it is important to involve them all."

Although Hill Wild chocolates are beginning to travel far, their team remains small and local, giving priority to developing interests within the community before reaching out to other parts of the country and the world. For lunch, Stephen and Vashum cook for themselves and their staff: an Ukhrul specialty of pork, plump and flavorful, smoked in a traditional oven and served with a thick gravy and sticky rice; a salad of avocados from their farm; river fish cooked in local tomatoes; and a sour wine made from plums that they wish to start promoting soon. For dessert, there is chocolate, and the constant talk of Ukhrul: its native lily flower; its abundant variety; how gooseberries, squashes, mangoes will drop from every corner in the region. "Even today, while walking in the farm, we discover something new. Sometimes when I go off on my own, I get lost, picking wild edibles," says Vashum. "There is so much here to work with." 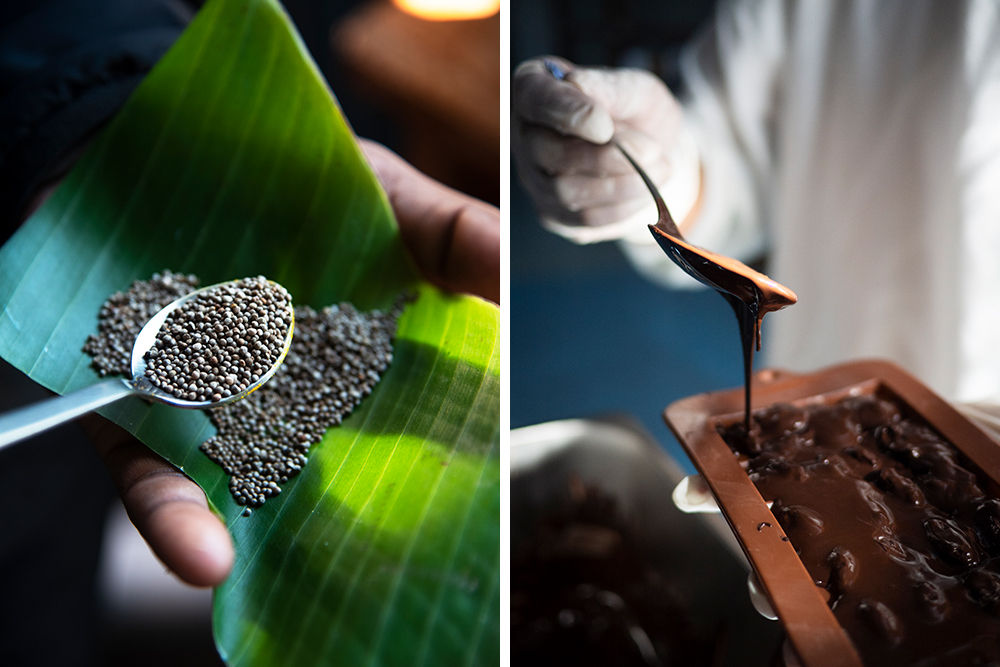 (left) Perilla seeds are a main ingredient of Hill Wild chocolates (right) pouring chocolate into its mold. All of the chocolates are made by hand, and the mixing of ingredients and experimenting happens here on the farm.

"The elders of our region have been waging wars based on ethnicity for decades," Stephen says, "But?I have friends from all communities. Entrepreneurs in Manipur really support each other. We are not a society that has been built around the 'I', the idea of profit." The duo knows the importance of keeping others in mind. Says Vashum, "One person cannot make change by themselves, it is important to involve them all."

While the elders of the Tangkhul Naga tribe used to practice agriculture in a wide and inventive way, the past two decades have seen a huge reduction. "The production potential here is high, but people don't know how to add value to their produce," says Vashum. Additionally, Manipur shares a border with Burma, a large trade hub bringing South East Asian produce. In the markets of Ukhrul, local vegetables pop between grapes from Thailand and apples from China. Older indigenous farmers sit with baskets of golden, crusty dried mushrooms and large root vegetables, unidentifiable in any language but their own. The region is also famous for its pineapples, small and sweet, and its nuts, which Hill Wild aims to bring back by infusing in their chocolates. "We can grow many things here, we have knowledge from our elders, and fruitful climate," says Stephen. "It's about reviving interest."

"It can be scary to do something new - this way we all know we are not alone."

Stephen and Vashum have risen to meet the challenge with Made in Ukhrul, an initiative to encourage farmers, designers, cooks, and craftsmen to create products rooted in the region. Because of their efforts, wine, tea, blankets, and woven fabric enterprises have all sprung up in small villages. "We have 91 entrepreneurs under the catalogue now, so we encourage them, package for them, sell for them," says Stephen. "We tell people to be patient with these things. And to be there for one another. It can be scary to do something new - this way we all know we are not alone." 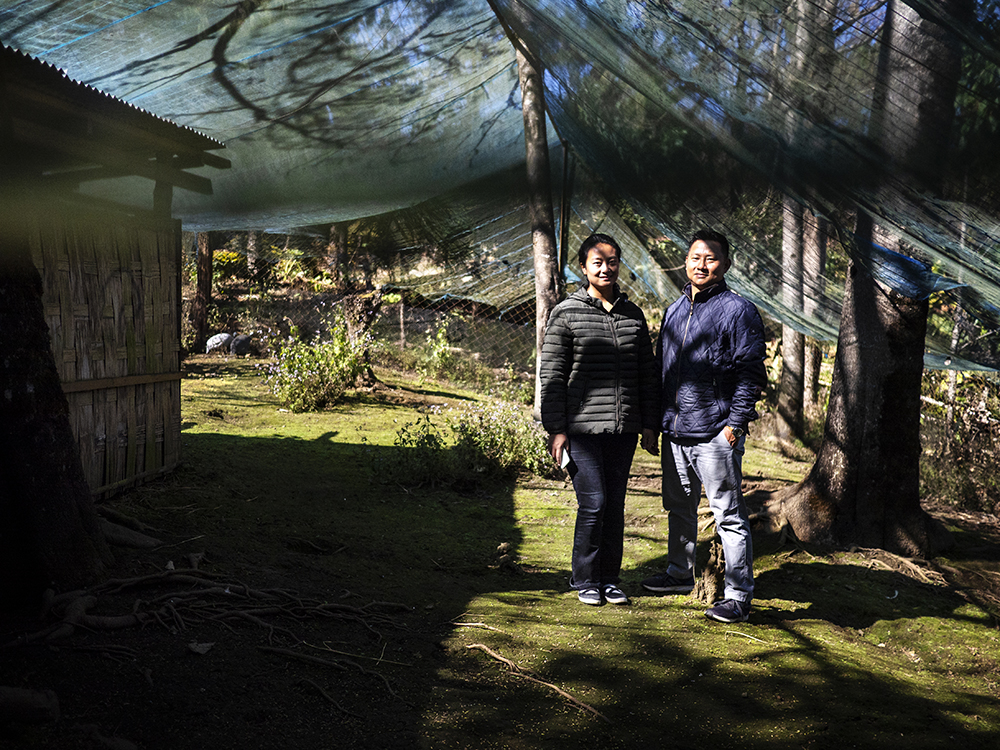 After lunch, they head to their workshop to discuss a chocolate order for a wedding. "When we started this, more than anything it was about coming back," says Stephen. "But really returning - not using our identity to market something."

"We think that we want to make Ukhrul completely sustainable by 2030. Lots of local goods, for others, yes, but mostly for us," laughs Vashum. It is difficult, they admit. But, Stephen shrugs, she has plans. Chocolate tourism, an artist residency in the farm, wine-making workshops. It's all growing from her mind out into the landscape around her.

Sharanya Deepak is a writer from and currently working in New Delhi. Most recently, she won the CN India food writer award for her piece on the decline of saffron farming in Kashmir. More of her work is available on her website.

Azra Sadr is a photographer based in India who shares her love for food and travel through photography.  For her commissioned and personal projects, visit azrasadr.com and follow her travel experiences and photo stories on azrasadr/insta.
BACK TO STORIES
More stories in agriculture, business, culinary, production