In Dimapur, India, 32-year old Inali Aye is living her best life as a food entrepreneur and blogger in Nagaland's Dimapur city, where she natively belongs. Her vast one-storied house stands in a large compound encircled with trees springing new leaves in Chekiye village, just a few miles away from the newly developed Asian highway connecting India's Northeast to South East Asia via Myanmar.

The pungent aroma kicks in after three to four days

Inside her kitchen, divided into a dining area and a cooking space where the family uses both a modern gas stove and firewood, Aye is cooking up a traditional Naga meal of Pork curry with Axone, or Akhuni. It is Axone, a fermented soya bean paste, that brought us here to see how it's prepared and cooked into a curry, broth or chutney in a Sumi Indigenous tribal household that proudly proclaims it as their signature food.

Even when they're not cooking, the fireplace is kept going to smoke beef and pork laid on top of a wired mesh along with the Axone cakes wrapped up in wild leaves for fermenting. Before smoking it, the soya beans are washed, pressure cooked and pounded to a paste early in the preparation. The pungent aroma (and taste) kicks in typically after three to four days when it wafts through the kitchen, signaling it's ready to be cooked. 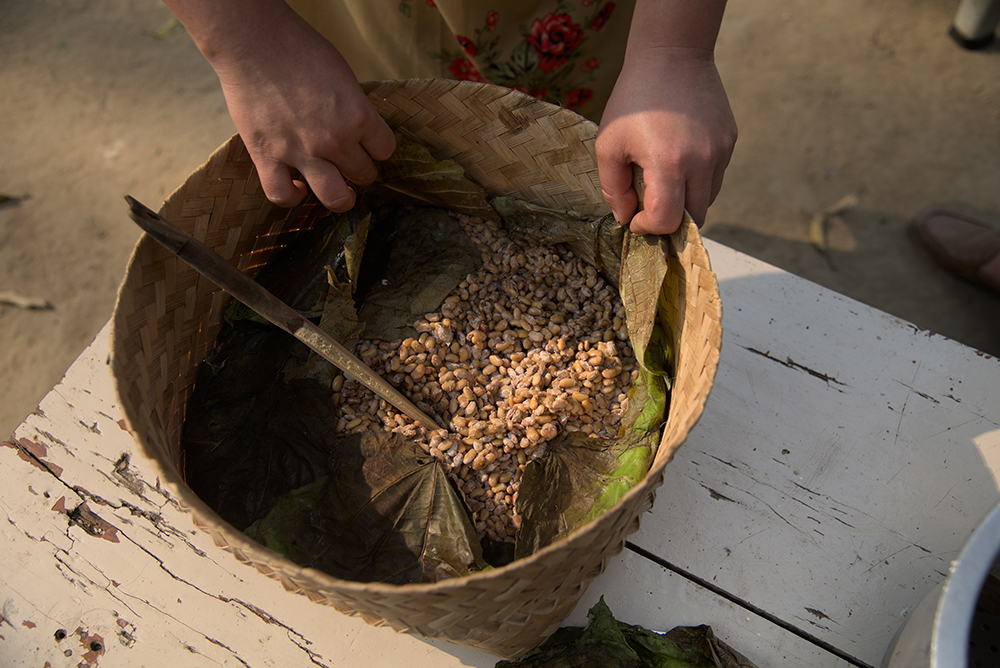 A basket of Axone kept for fermentation.

"Sometimes, maggots form around the Axone paste in one or two days. But that's good," said Aye, adding that the quality of wood also influences the taste.

What might be considered a nuisance of a smell to an outsider has a Pavlovian effect on Indigenous taste buds like Aye's. But while she was studying in New Delhi several years ago, Aye almost got into a fight with the neighbors. "We were cooking Axone and pork for a function at my friend's place and some ladies knocked at the door demanding to know what was cooking," she recalled.

"One of the neighbors told us that someone had earlier even filed a police complaint when Axone was cooked."

Such incidents are hardly uncommon among Northeast migrants in India's metropolitan cities. Bearing strong Mongoloid features unlike most South Asians, people from Northeastern communities are routinely subjected to racial profiling and attacks as well as housing discrimination for their dietary habits among other cultural differences. What happened with Aye was recently depicted in an independent film, Axone, in Delhi's Humayunpur area that has transformed into a Chinatown of Northeastern businesses, especially food.  In the movie, the neighbors were fooled into believing the fermented food being cooked was actually an open septic tank. 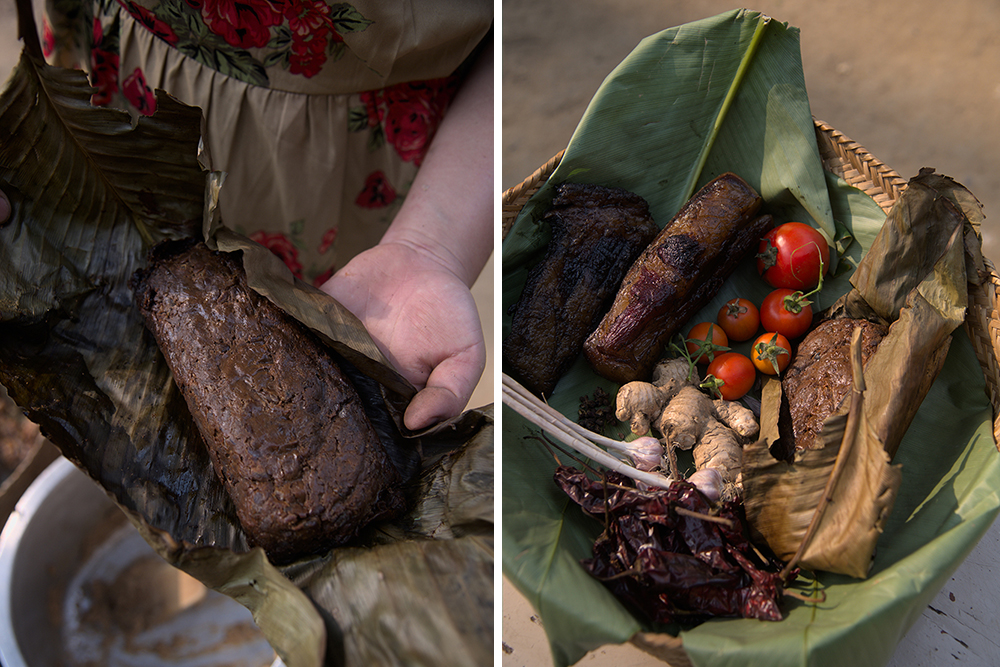 (left) A completely fermented and smoked batch of Axone, (right) Inali gathers all the ingredients needed to make the signature Sumi dish of smoked pork with Axone

Anthropologist Dolly Kikon, who teaches in the University of Melbourne, called it a 'challenge' to capture the taste and smell of Akhuni. "Unlike categories of food that fall into the dominant classificatory list of clean and unclean food, fermented or smelly  food is something else entirely," she wrote in a paper titled, Fermenting Modernity: Putting Akhuni on the Nation's Table in India.

In the context of a 'mainland' city like Delhi, where South Asian Hindu societies make up the majority, Kikon argues a strong relationship between food and concepts of caste purity and pollution. "In the caste world of food, smell is very central, in terms of distinguishing what is pure and polluted," she told me.

In her extensive research on the subject, Kikon found that many landlords and neighbors in Indian cities complained about dry fish or fermented soybeans calling it ganda (dirty) or badboo (stinky) in Hindi. "It shows us how much the idea of purity is not in what you see, like this is meat or fish, but in a sense of what you smell," added Kikon. 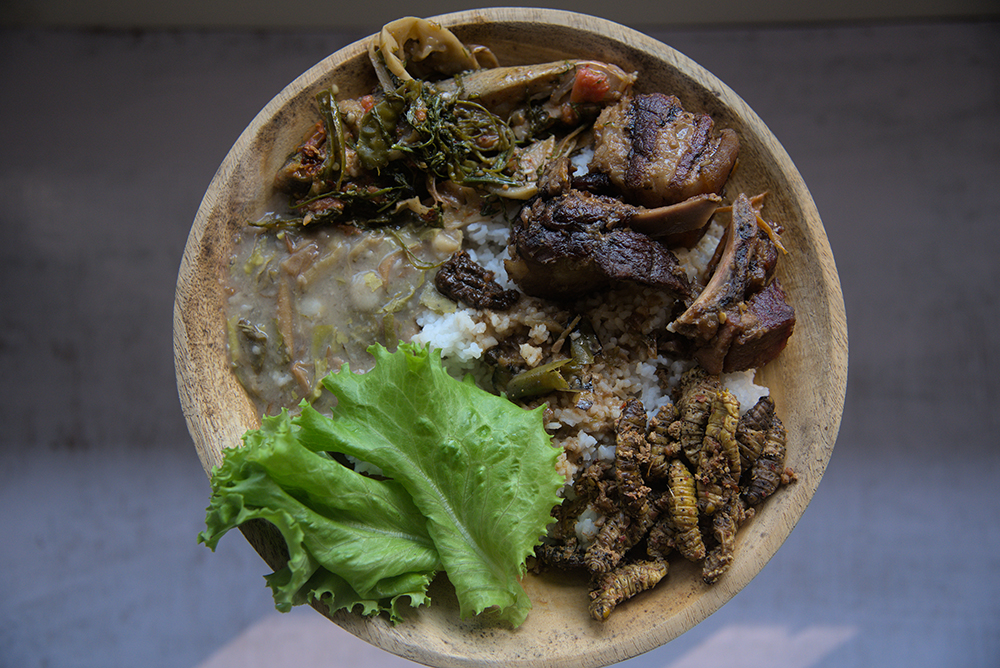 But here in Nagaland, Aye is unapologetic in owning the wide variety of meat and local organic ingredients eaten by more than 16 official tribes and several hundred clans, most of whom still practice the traditional jhum (slash and burn) cultivation. In fact, almost every tribe follows their own unique fermentation process - like the Naga Ao tribe who are known for fermenting Taro leaves (Anishi) from the Colocacia Esculenta growing in the wild. Fermented bamboo shoot and dried fish are uniformly consumed across Northeastern tribes, who trace their origins to erstwhile Burma, Tibet and the Chinese Yunnan province.

Aye's  visual diary on Instagram displays her culinary exploits with everything from pork, fish and beef to frogs, eel, silkworm and snails. All except dogs, because it's a sensitive subject in the state, which had passed a momentary ban on the commercial sale of dog meat in 2020.  The move was strongly opposed by traditional tribal bodies, largely since the order was prompted by a prejudiced belief of the meat causing a coronavirus-like outbreak.

"A lot of food bloggers don't post stuff like frog legs... I filmed the entire process of cooking and cleaning it and ended up with a lot of negative comments," she said. But Aye remains unfazed, determined to promote Naga cuisine in its authentic style. 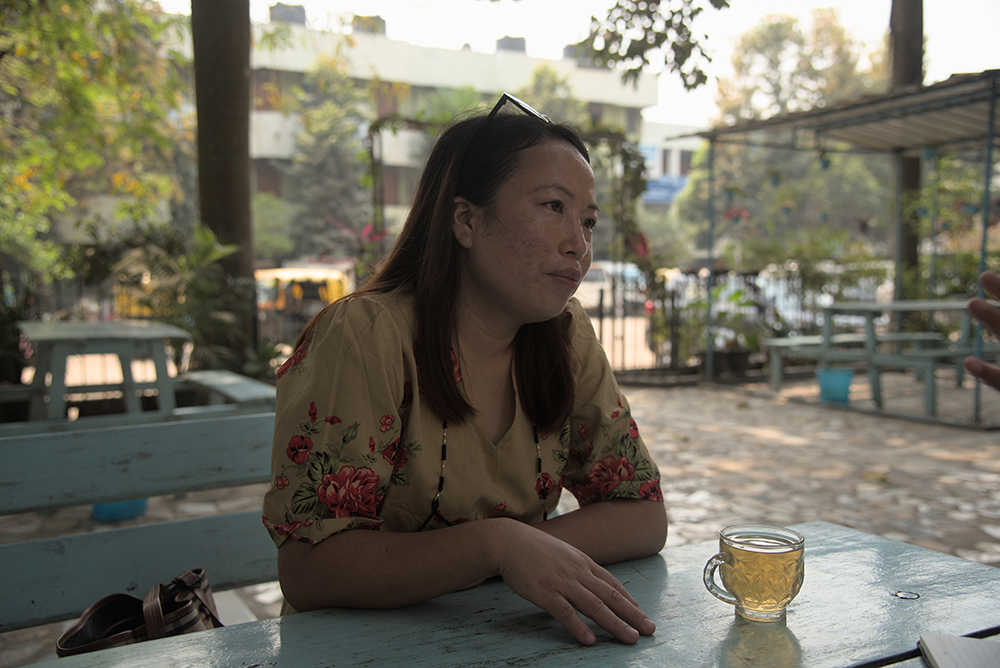 Inali Aye, food entrepreneur and blogger, shares her story between cooking and shopping at Dimapur Market.

Surely, what is considered palatable is relative to a place and culture, but with globalization of the latter as products, particularly Western fast food or Italian meals, some foods are now considered more universal in taste than others. Writing about the Disgusting Food Museum in Sweden for The New Yorker, Jiayang Fan found that 29 of the 85 dishes on display were Asian, of which 12 were from China. Many of them were fermented, like shark from Sweden and Filipino shrimp, a fermented herring called surströmming, and the Chinese stinky tofu (fermented bean curd).

In fact, Indigenous cuisines often run the risk of compromising eccentric features to suit a wider palette. In 2016, Landimliu Pheiga Gangmei introduced Axone in Europe when she started taking her food truck, Lulu's Tribal Kitchen, to festivals in Belgium and Netherlands.

"People are familiar with fermented soybean from Japanese and Chinese cooking so I had introduced it but kept it separate from the main dish," said the 36 year old chef, who belongs to the Rongmei Naga tribe from the Northeast Indian state of Manipur. "People did try our food but they didn't come to fill their stomach. Now slowly we've built a loyal customer base, especially with take outs during the pandemic." 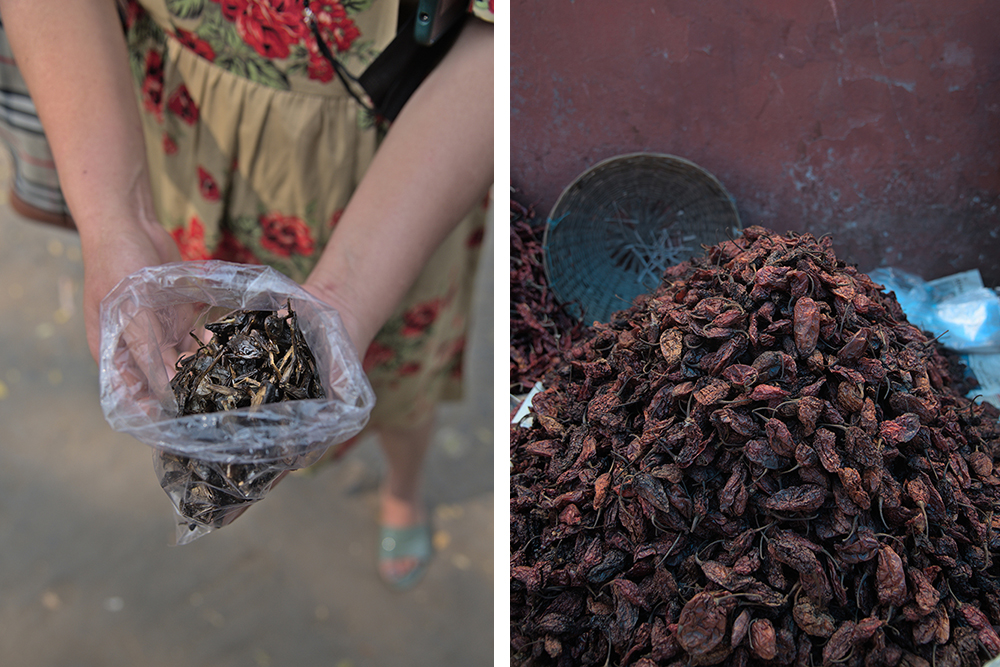 Scenes from Dimapur Market: (left) a packet of smoked frogs, (right) a pile of dried Raja Mircha (infamously known as the world's hottest chili aka the Ghost Chili).

Gangmei believes that 'adjustments' are par for the course with all cuisines when taken to an international market. "You won't get that typical Thai food that you get on the streets of Bangkok. In fact, they make it a bit sweeter because that's what people in Gent (Belgium) like," she shared.

Food anthropologists say that fine dining restaurants in Indian mainland cities typically tone down flavors, particularly for fermented foods, to accommodate for a wider palette. "But this doesn't happen when it comes to beverages whether it's wine or tea," said Kikon, who also grew up in Dimapur.

"The question is why in a country like India, tribal fermented foods like Axone and bamboo shoots evoke such a strong reaction? But as soon as you get out of India, you don't see that sort of reaction coming from the same people." 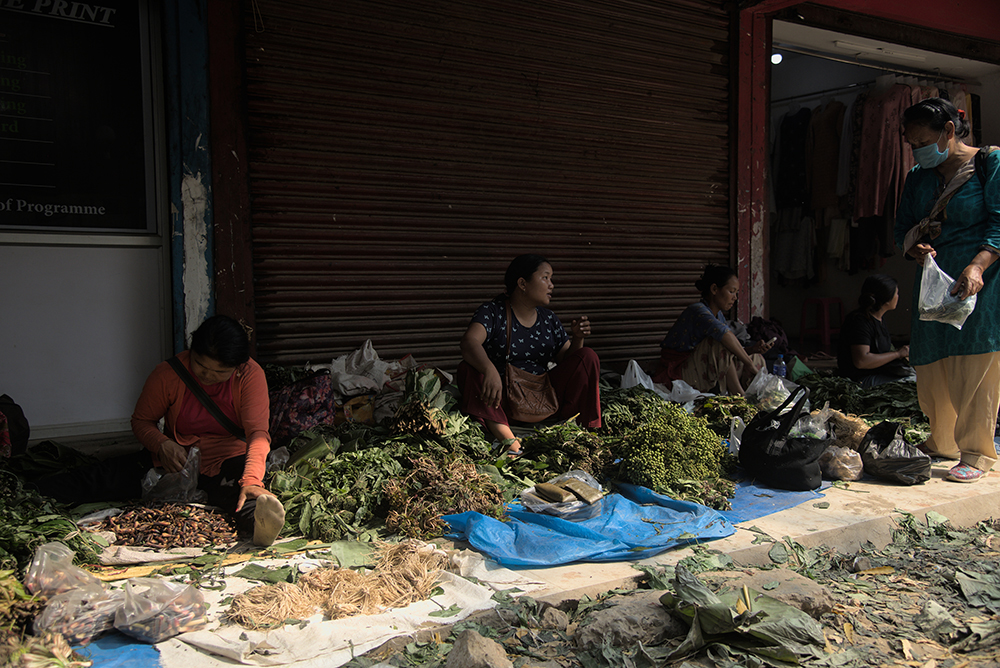 When Aketoli Zhimomi made Chef at a five star hotel in Kolkata a year and a half ago, she saw it as her golden ticket to not only take Naga food to an uninitiated audience but evolve traditional recipes to a fine dining experience. She'd already been successfully running a traditional Naga kitchen, Ethnic Table in Dimapur, for five years after winning the very first cook-off in her state at the famous annual Hornbill festival in 2013.

We have to preserve our individuality

"ITC hotels were the first to introduce Northeast cuisine in their buffets," she said. "But we couldn't use much of the Axone and bamboo shoots because of the smell. Some of the customers would complain about it."

But despite the earnings and praise she received, Zhimomi hit a wall after some time and yearned to experiment with Indigenously foraged herbs and fermented ingredients sold in weekly haats (markets) hundreds of miles away at home. She returned to take back charge of her kitchen in February and has since been busy experimenting with Axone as ready tastemakers that can blend into an array of international fusion cuisines like beef filet and salads. 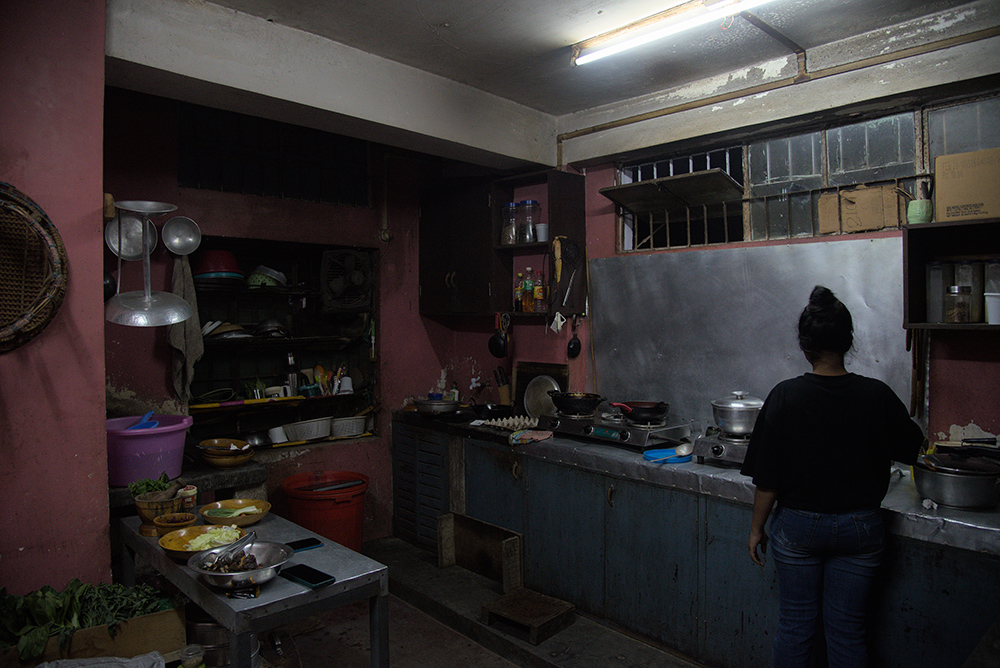 Aketoli at work in her kitchen.

"With Anishi and bamboo shoot, I want to make sauces that retain the original taste and smell. You can take it anywhere with you and mix it with anything," she said.

Zhimomi finds her inspiration in the Korean miso paste or the Japanese sushi ("the first time I tried it, the raw fish didn't go down well") that have traveled well beyond their domestic shores and been acquired into global gastronomical palettes. The idea is to normalize the flavor of Axone just as the African piri piri or Japanese Wasabi can be found in all kinds of fusion foods today. 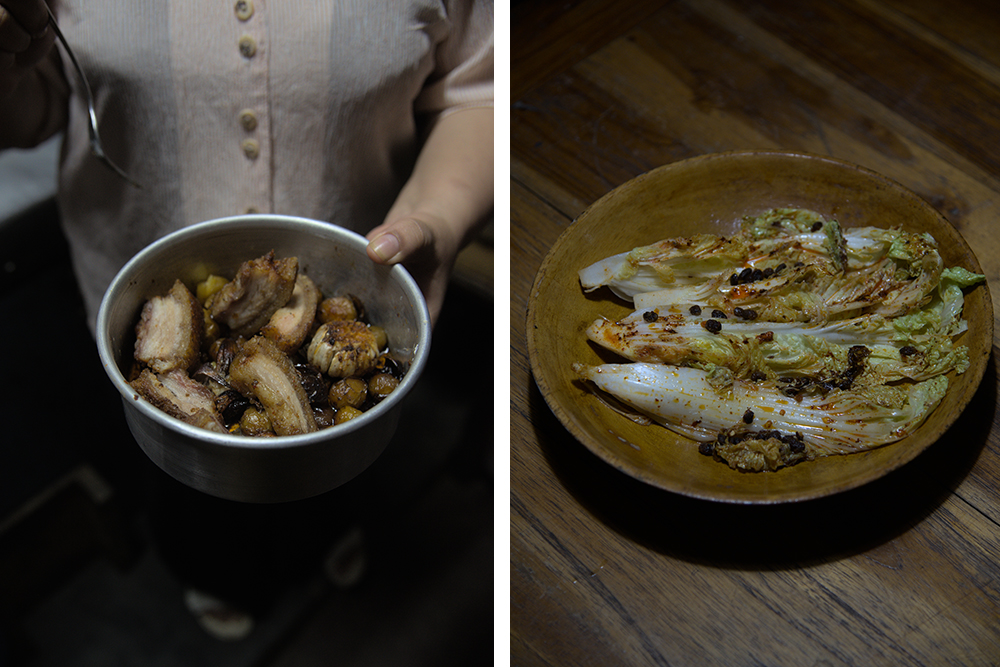 "We have to preserve our individuality, the Indigenous quality of our food because it is only then would people come to know about our culture and tradition," she said.

"If we keep molding it, and there is no smell, then we lose the Naga-ness. Our identity."

Makepeace Sitlhou is a freelance journalist covering India's Northeast. She can be reached on twitter @makesyoucakes.

Devraj Chaliha is a freelance photographer covering India's North east. He can be reached at ch.devraj (at) gmail (dot) com.

BACK TO STORIES
More stories in culinary