Black Women Come of Age in the Food Industry: A Conversation with Chef Toni

I've worked in places where I rarely see anyone that looks like me. As the token woman of color in the kitchen, I've made a conscious reputation for myself. I have to be conscious, knowing the mental and spiritual risks in assuming such roles. And I try to be an example, a smoke signal for other minorities, to remind them of their freedom to take up space. When I graduated from The International Culinary Center in 2014, I quickly took up experiences beyond the pastry kitchen where I had trained: teaching food justice in Vermont, living on Maui, working at US Representative Chellie Pingree's farm and restaurant on an island off the coast of Maine. Always I encountered questioning faces, silently asking how I ended up where I did. The answer is: I moved historically, through the back door and straight into the kitchen, by invitation of other women of color that dared me to continue.

Chef Toni Lynn Dickinson, Senior Pastry Chef Instructor at The International Culinary Center, led our pastry class, leaving impressions that have lasted through the years since I graduated. Dickinson was the only person I encountered at school who provided a mirror, an example of what I could be. She was my smoke signal. 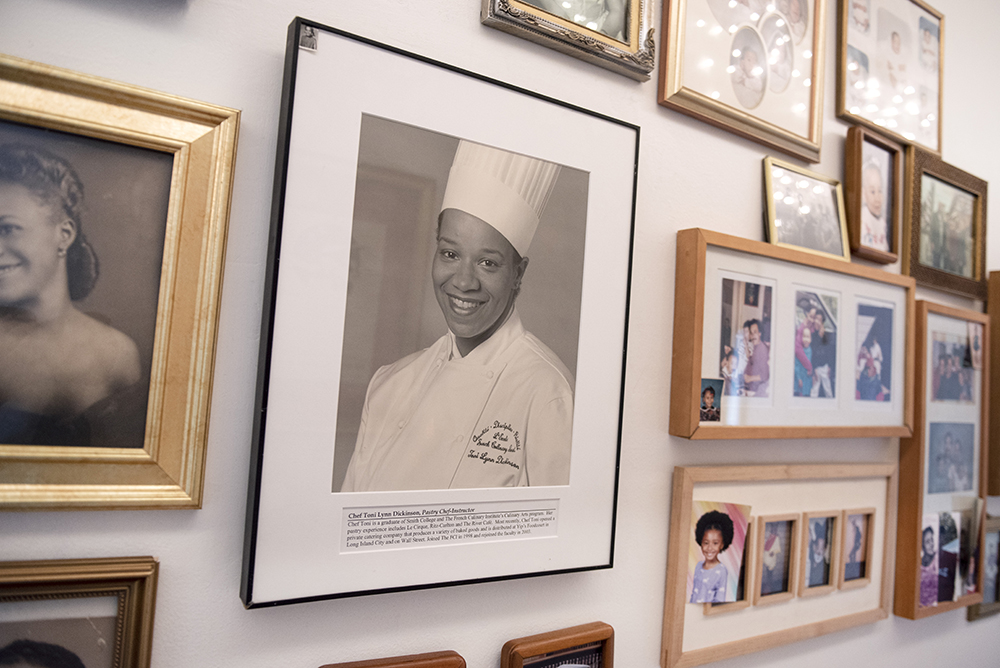 A photograph of Chef Toni at her home in Harlem, New York.

"As I got older, I realized my blackness had an effect on people I could not control." On the phone with Chef Toni, her voice is folded in tart rhythm, gentle as it was six years ago, when we last saw each other on a graduation trip to France. We exchange words bellyful with stories of her appearance on the Netflix baking show, Sugar Rush, and everything else we've been up to since France. In class, Chef Toni would come to our stand mixers and the tips of her fingers would trace the beater in search of dough left behind. She introduced the decree of how one should leave a kitchen, how I could find sovereignty in the decorum of being a chef.

She learned to move with conviction to a standard built on everything society says you are not.

In my search for more examples, post-graduation, I found myself on a path where identity was abandoned to obtain a standard. My realization that food has always lived in the same breath as justice and apartheid led me to women like Edna Lewis, but only through the realm of men like Dan Barber. The contribution that black people have given to food has always been under the guise of their white counterparts. In the glacial transition from a farm-to-table industry led by euro-centric, male authority, black women are starting to take the lead, with more restaurateurs, chefs, writers, and farmers than ever before.  The coming of age for black women in the food industry is right now. 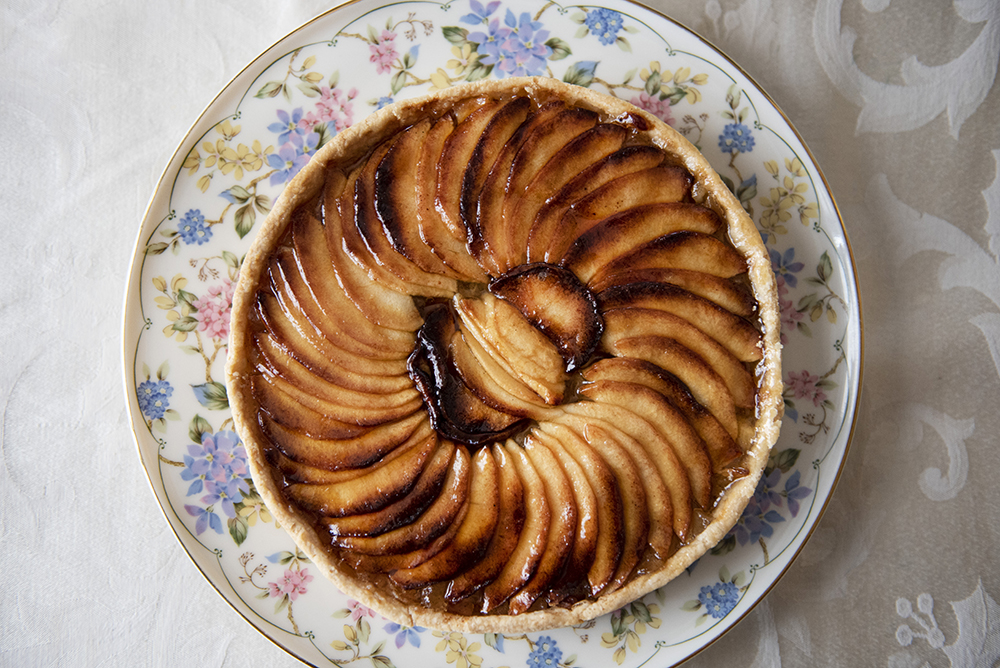 Chef Toni's apple tart at home on her dining table.

Chef Toni's description of her childhood has the ear of a James Baldwin short story, chic but also very real. "Growing up, we ate out of China crystal and silver every night, not a pot on the table, and we lived in the projects." Her experience recalls a time when sustainable food was a way of life, not the exclusive niche it has become. Now it's being taught to newer black chefs in the rhythm of sankofa, meaning to go back and get it, from the Twi language of Ghana, regaining the power of preserved histories. Chef Toni reminds me of the beginning of her career, when she learned to move with conviction to a standard built on everything society says you are not: "My intelligence was something people didn't expect. Their defense was also to hold me back. In the second phase of self-understanding was confidence in who I was, in my knowledge, success with my students, and being pissed off. My knowledge by my other colleagues was sometimes automatically dismissed?even as a qualified instructor people were going to see me as my color.  My knowledge made them fearful. Suddenly I was more than just the black instructor and students wanted to be transferred into my class. That was pivotal for me, education-wise," says Dickinson. 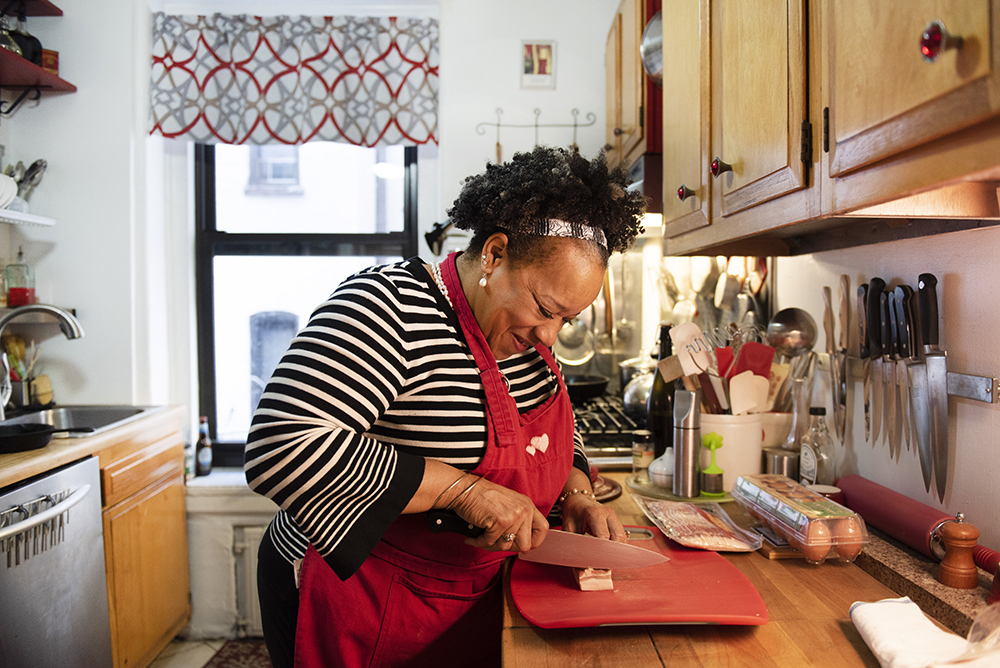 Chef Toni cooking breakfast for her family in her home kitchen.

According to the U.S Bureau of Labor Statistics, in 2017, out of 465,000 working chefs and cooks, only 20 percent were women, and 4 percent of those women were black. The percentages of other women of color was even lower. Dickinson is amongst the vast amount of multi-faceted women of color utilizing each movement and skill that makes up the soul of the kitchen. She sees it as an obligation to her students to remind them of their responsibility in this process. "It's a perishable art, discipline," she says. "Finding something to challenge yourself in the repetition. So when you do it, it's a different pleasure because you now understand the nuances of it."

The more you see us, the less likely we are to be dismissed.

When we open the memory of that trip to France, I can hear the smile in her voice. One morning at breakfast, before a trip into the mountains, I recalled her casually telling me I was beautiful. Before we hang up the phone, I ask her why she offered me that compliment, and she answers, "Because I was a young black woman, and I can see me in you. I really do believe that our black women aren't heralded enough, they are not proclaimed enough to be beautiful. They need to be reminded that their beauty is so different from the standard, it's so much better." She offers blunt words of advice, to "be your best advocate," and "don't wait until you think you're perfect and ready, you're perfect and you're ready now. Relevance happens when you make yourself relevant, if you stand back waiting to be perfect in order to be relevant, you are passé." 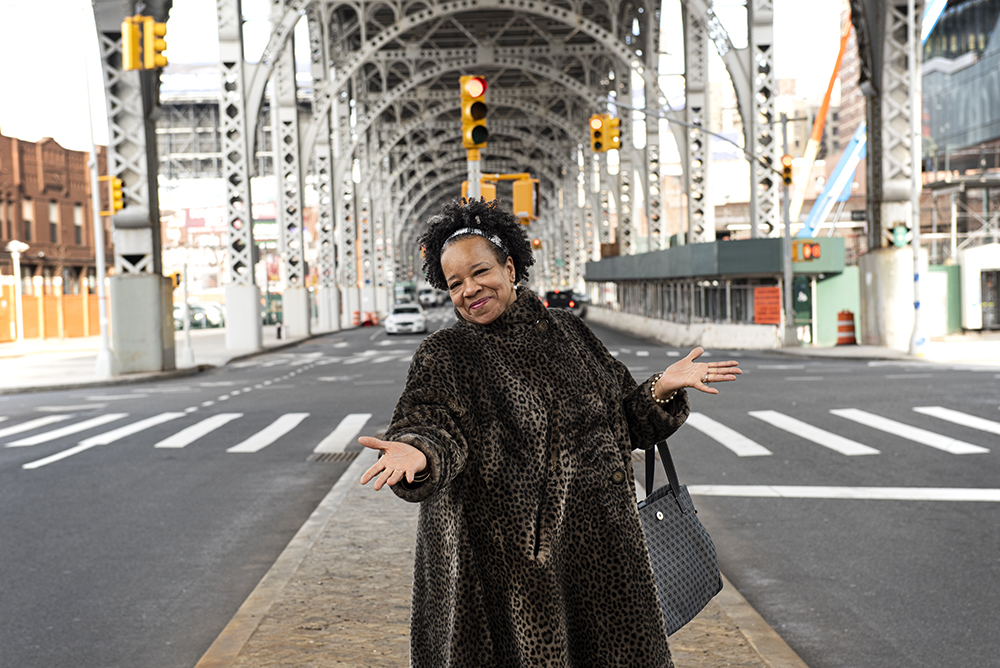 Chef Toni walking through her neighborhood in Harlem, New York.

No strangers to positions that are the backbone to a bigger picture, black women are slowly refashioning the standard. The more you see us, the less likely we are to be dismissed. With all that she's cultivated between her teaching and her art, I ask Chef Toni what is her proudest moment as a chef. There is a silent pause and a thoughtful chuckle before she replies, "Gosh, maybe I'm still searching for that."

Jasmine Michel is a farm-to-table chef and writer. An alumni of The French Culinary Institute and the Eco Practicum School of Ecological Justice, she dedicates her work in food and writing to the marginalized. Her first chapbook, Jungle Woman, written while living off-grid on Maui, Hawai'i as a farmer and cook, is a declaration of self through healing and harvesting the jungle. Jasmine's newest project, Dreamboat Cafe, is a pop-up food series and catering of nostalgic craft and West Indian/ Haitian heritage. @Jaz.Michel @DreamboatCafe

Liz Clayman is a native Mainer, and now longtime Brooklynite. She is a freelance photographer, specializing in the culinary and hospitality industry, working with restaurants groups and editorial clients alike.

BACK TO STORIES
More stories in culinary, education