Hungry for Vegetables (and Change) in Nashville’s Trap Garden

Robert Horton left his hometown of St. Louis for college believing he was destined for the board room. He enrolled at Tennessee State University in Nashville, a historically black college (HBCU), because of its prestigious health care administration program. Health care was tradition: his grandmother was a nurse and his father worked in supply chain management for hospitals. He planned on becoming a health care CEO as soon as possible after graduation. "I knew everything I had to do to get there," Rob said.

But it's twelve years later now, and as he heads to work, the suit and tie remain in the closet. He ditched the path toward the executive suite to till up Trap Garden, a social enterprise that includes a series of community gardens and sustainable living projects bent on improving health outcomes in underserved communities - or food deserts - around Nashville. In the neighborhoods where Trap Garden operates, people don't call him 'sir' or even 'Mr. Horton' - people know him as Rob Veggies. He wears overalls that taper slim toward a pair of Jordans. A fitted Cardinals cap, bright red and without a smudge, tops his head. He's an urban farmer, and he's fly.

A focus on prescriptions, not prevention bothered him.

"Once I was out in the health care world, I realized it wasn't what I wanted," the thirty-year-old said. A focus on prescriptions, not prevention bothered him. He wanted to make a difference and soon realized traditional avenues wouldn't accomplish his goal. Another option had already begun to present itself. He could help people take control of their diets, their food supply, and, therefore, their health, and he wanted the process to be an authentic expression of himself and where he's from. 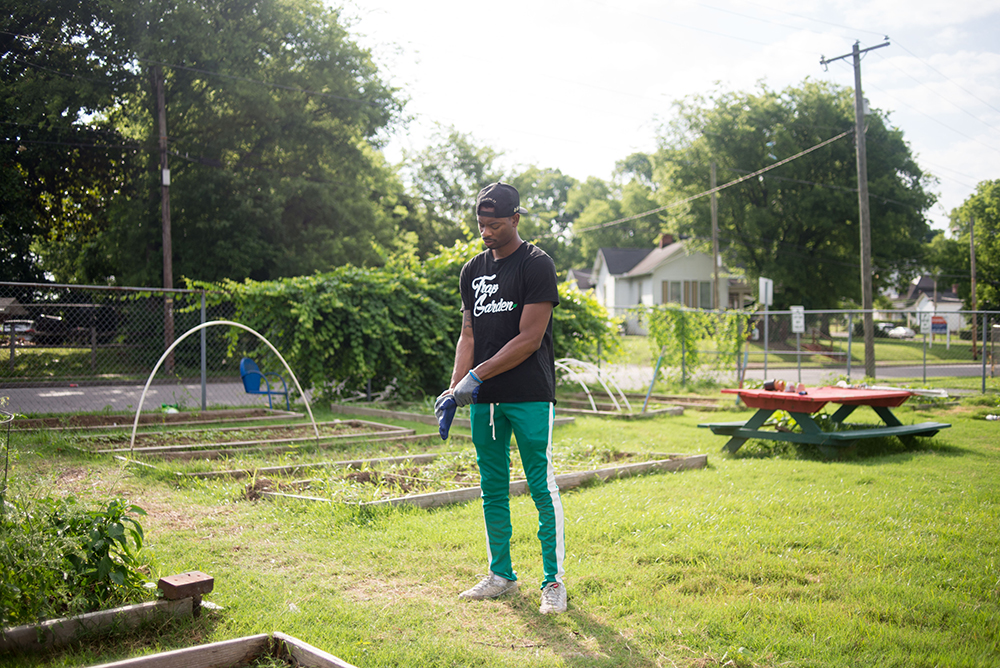 A native of St. Louis, Missouri, Rob Horton works to improve access to health and wellness in underserved communities around Nashville, Tennessee.

When he first arrived in Nashville, Rob could tell the neighborhood around his campus-Metro Center-lacked access to fresh and healthy food options, just like in St. Louis where Rob remembered living off the candy and sodas he purchased to and from school as a kid. Apart from his family, the environment didn't promote health. As he settled into Metro Center as a professional, and began work on an MBA at Belmont College, options hadn't improved. The only supermarket around served limp lettuce and little else. Desperate for healthy options, he chose to act; he didn't need a grocery store. He'd grow his own.

"I told myself that if I fail, then I'll just shop at the grocery store," Rob said. It would prove that providing healthy food to large communities was easier said than done, and "they're just doing the best they can, too."

"I told myself that if I fail, then I'll just shop at the grocery store."

He didn't fail, but it wasn't easy. Rob rented a plot in a community garden at his alma mater. Elders taught him how to maneuver a tiller through packed earth. Working the soil didn't come easy to Rob, who had no previous experience with farming or gardening. The mutual relationship between rainfall and plant growth, for example, had to be learned through error. Rob knew that rain helped plants emerge from seed to sprout to flowering organism. But how quickly tomatoes, squash, and weeds could cover a plot in a wild green mass surprised him When it rained every day for a week during his first season, he figured his plants were being fed and therefore happy. When the skies cleared, he checked in and found a plant matter explosion. A hard week of weeding taught him that gardening required attention, rain and shine. 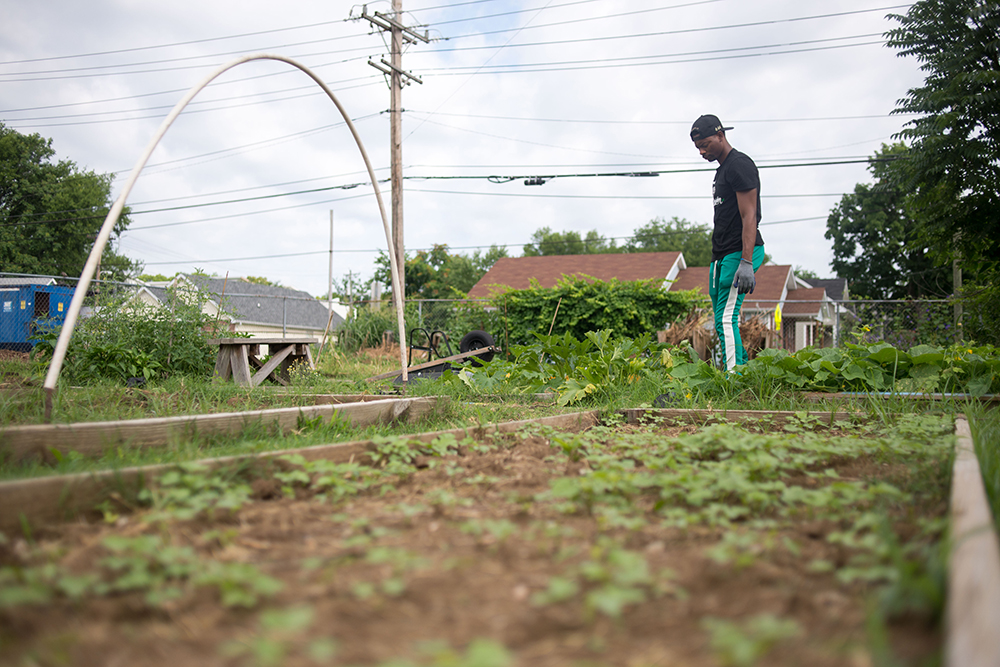 Horton tends to one of Trap Garden's garden projects in South Nashville.

From these trials, Trap Garden emerged officially in 2014 as a side project while Rob worked and finished school. Using connections and the skills collected by studying and working in the corporate world, Rob reached out to schools, chefs, and community organizations to begin implementing educational programs that are still employed today.

Community gardens became the core of the Trap Garden mission. There have been as many as five at one time, with locations outside offices and restaurants. Currently, two gardens housed on public school grounds offer all ages a place to raise tomatoes for the table. But for Rob, whose personal mission is to promote healthy lifestyles, the lessons only begin with growing food.

Horton, who goes by "Rob Veggies" in his work for the nonprofit Trap Garden, poses for a portrait in a community garden at the Johnson Alternative Learning Center in South Nashville.

Today, Rob Veggies is just as likely to be found helping a class of elementary school students taste cucumbers or eggplant for the first time as in the garden. By partnering with the Toyota Green Initiative, a brand campaign to promote sustainability in African American communities and HBCUs, Trap Garden became mobile. At music festivals and college football games in the region, Rob shows up to offer advice on eating better, becoming active in communities, and adapting eco-friendly habits. This work fits into Rob's definition of sustainability-advocating for the long-term health of body, mind, and habitat. 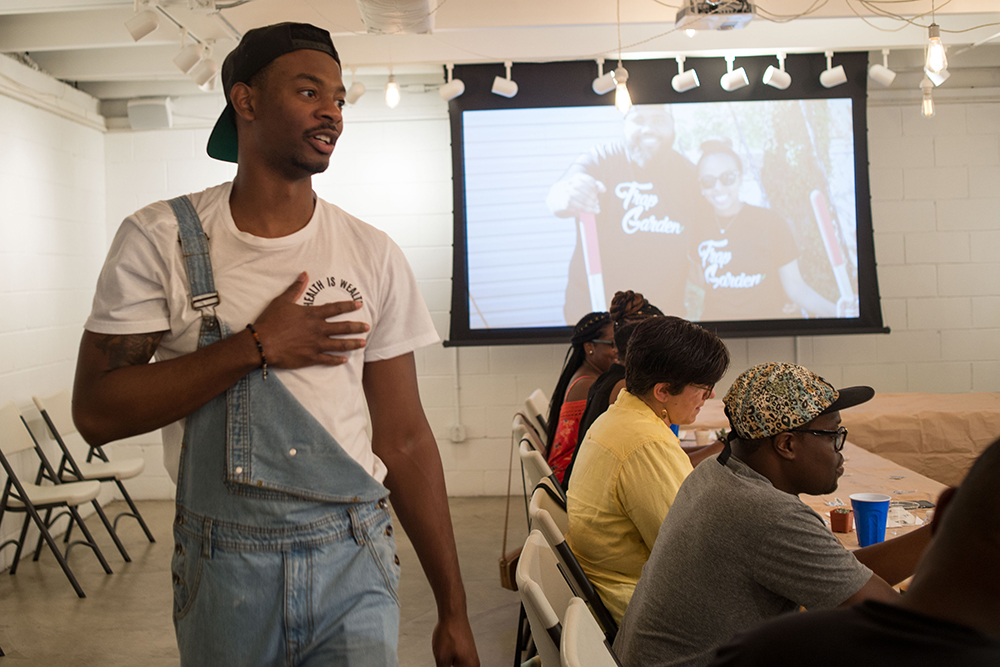 Horton addresses attendees during an event to raise money and spread awareness of Trap Garden's health and wellness efforts around Nashville.

Rob recognizes that nonprofits with far more resources than Trap Garden also try to improve food deserts with education and opportunities, but he connects at a level that outsiders can't. Take the name: Trap Garden. People associate the Trap with drug dealing. But for kids in underserved neighborhoods, it's what they call home. The Trap, Rob explains, is a place where people learn to hustle and survive. The Trap taught Rob to fight for what's right. With that mindset, he can approach kids and adults from similar backgrounds.

The Trap, Rob explains, is a place where people learn to hustle and survive.

"I'm the product of a food desert. There's a disconnect in language and involvement because [most nonprofits are] not with the people," he said. Rob Veggies is of the people. He's proof that "you can have a lasting effect on your community and still look dope and fresh." 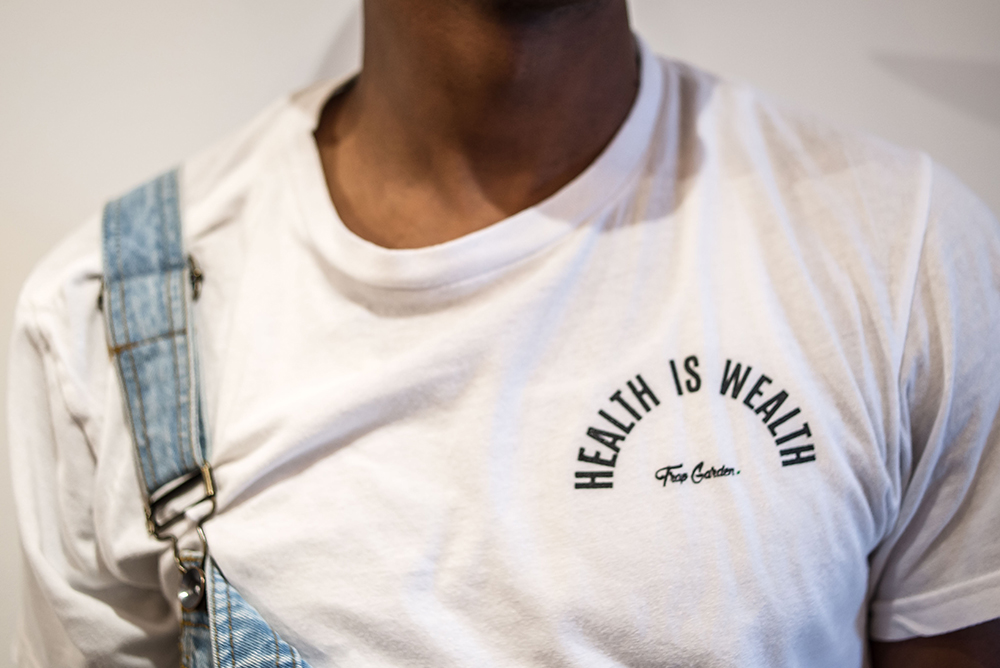 André Gallant is a writer and photographer based in Athens, Georgia. He is the author of "A High Low Tide: The Revival of a Southern Oyster," publishes and edits the literary farming journal Crop Stories, and has written for Oxford American, Garden and Gun, Modern Farmer, and the Bitter Southerner, among many others. Learn more about his work at www.andre-gallant.com and follow him on Instagram and Twitter at @andrejgallant.

BACK TO STORIES
More stories in agriculture, education, nonprofit