At first, I didn't know I was walking into Cocoa Cinnamon, I just knew I wanted a drink to combat the unforgiving heat of summer in North Carolina. I was visiting Durham to meet up with an old culinary school classmate of mine and found myself wandering into this coffee shop, where I was immediately greeted by walls painted with event flyers - for women of color discussion groups, femme art shows, and local poets. I was surprised, given that my knowledge of coffee and roasteries was limited to the narrative that it's a community run predominantly by white men. I was so enticed by the menu, I forgot all about the beads of sweat making a permanent pendant on my neck. Each drink had a name - the 'See-Line Woman' influenced by Nina Simone, 'Moctezuma' named after the last ruler of the Aztecs - but there was more: each drink had a personality. As I slurped on an iced coffee blended with espresso and condensed milk and topped with raw sugar, I wondered who was behind the blend of creativity and authenticity so unique to this place. Thirty minutes later, my pulse more than alive, I grasped the effect of drinking my very first "Toon Up".

Cocoa Cinnamon's owners are fascinated by the histories of spices and human migration, and how the search for spices, gold, land and power led to the world in which we now live.

Sitting across from Areli Barrera de Grodski, co-owner of Cocoa Cinnamon and 4th Dimension Coffee in Durham, North Carolina, I can feel the energy she gets from looking through Cocoa Cinnamon's very first menu and discussing her principles of inclusion and involvement. Together with her husband, Leon, Barrera de Grodski named each tea, drinking chocolate, and coffee beverage with names inspired by stories of the Spice Trade Route and other historical events. They are fascinated by the histories of spices and human migration, and how the search for spices, gold, land and power led to the world in which we now live. The Cocoa Cinnamon website states: While the content of many of the stories are tragic, we see beauty in the mixing and ebb and flow of culture in the world of today. The result allows customers to merge with the past while sipping a Middle Eastern iced coffee, or the drink for which an entire family tracked down the perfect Mole recipe (after all, how else would one "encase the flavor of Frida Kahlo"?) 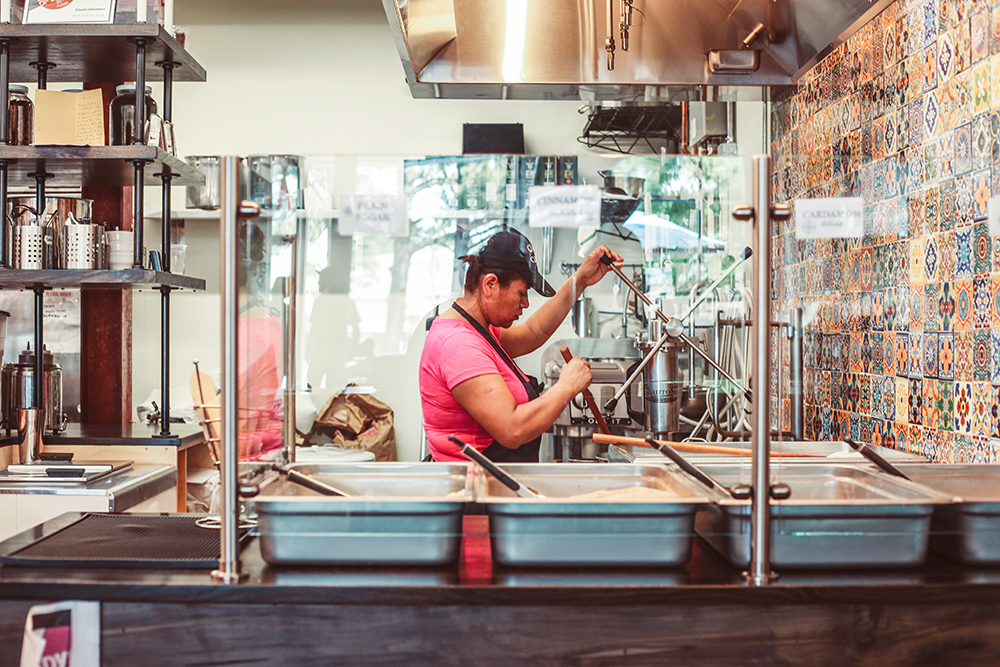 When asked about the experience of creating this menu, Barrera de Grodski says, "It's really intense, it's intimidating, and yet, we were so freaking excited to put it out. We wanted to explore all of these things and all of its people." The collective impact of the coffee world is what first pulled at her heartstrings: "I had to find a job that was going to challenge me creatively, and I appreciated the community aspect in the coffee industry. I had this beautiful realization - this vivid vision that my tribe is [made up] of entrepreneurs, and that I'm on this earth to work with [them]."

Barrera de Grodski moved to the States from Mexico in the early nineteen-nineties, alongside her siblings. She has lived the balance of being raised in America while holding true to her father's entrepreneurial customs, the principles that shape the way she runs her business today. Traces of her lineage kiss the corners and ceilings of Cocoa Cinnamon's three shops. The third and newest location brings the entirety of her initial vision to fruition. "I know that my pride and my heritage are very present in our business, but also wanting it to feel welcoming was my angle with the decor. This third location is the pinnacle of what we have been wanting to build from the very beginning-this is exactly what we had envisioned when we thought about building a space that is open for all." 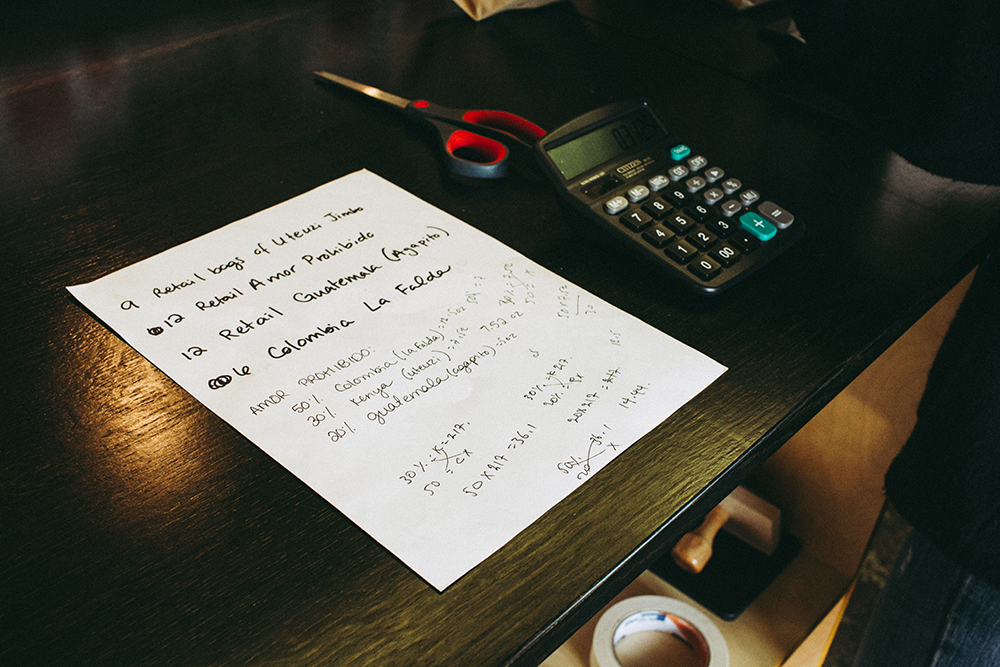 An assessment of coffee blends during the roasting process.

In these unequivocally welcoming spaces, Barrera de Grodski has managed to create a platform for sharing with others who are on the margins of life in a way that feels easeful. Customers croon with gratitude that their mothers can easily come in and order something in Spanish (there is always at least one staff member available who speaks the language). In doing so, Cocoa Cinnamon has expanded the conversation around coffee shops as a hallmark of neighborhood gentrification. "We understand that opening up and developing neighborhoods can be problematic," Barrera de Grodski says. "It is problematic. So, how do you undo some of those negative impacts and turn them into positive impacts? That has been our intention, to blend in with the culture that is already happening, that we are here for this community." 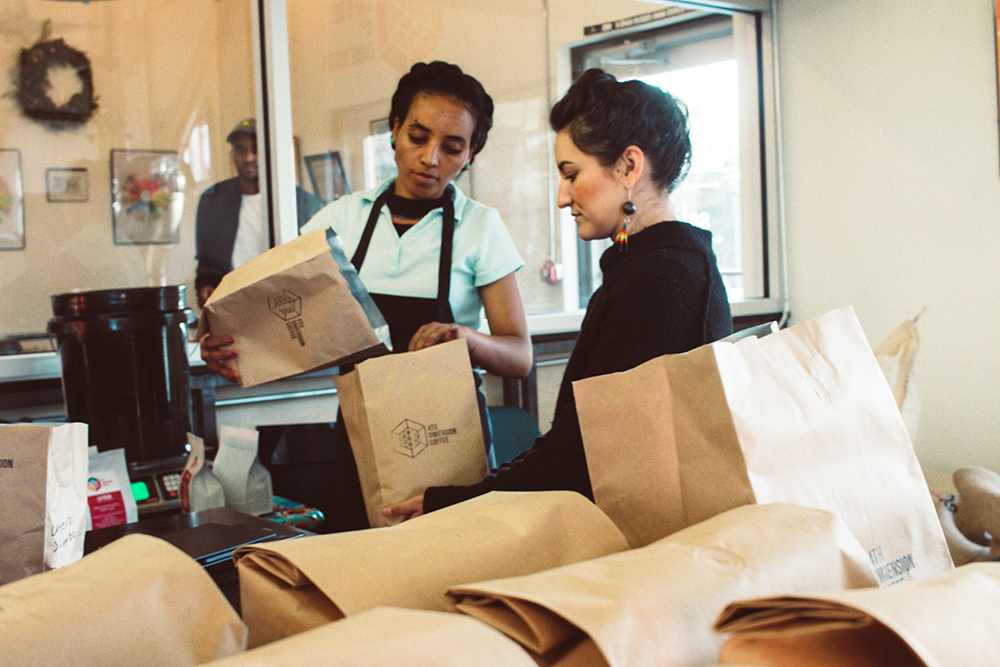 4th Dimension Coffee is their accompanying roastery and coffee brand. Barrera de Grodski and an associate carefully hand-pack each bag of coffee.

During my time with Barrera de Grodski - somewhere between our discussion of spiritual dehydration and the perfect playlist to bump to while working - I found the need to discuss creative processing as a WOC myself. "I feel like more and more people of color are starting to be more present and believe in themselves to become more present," Barrera de Grodski said. "When finding your voice within a sea of white culture, it takes you awhile to feel like your voice is important, too - to be seen. I do feel like that is slowly waking up globally, but also in the coffee industry. I still want to see more change. I want to make sure that black people can thrive in our business, that they can see themselves here. Although I don't have the answers yet for what needs to happen to make that happen, I decided this was my mission [anyway]." 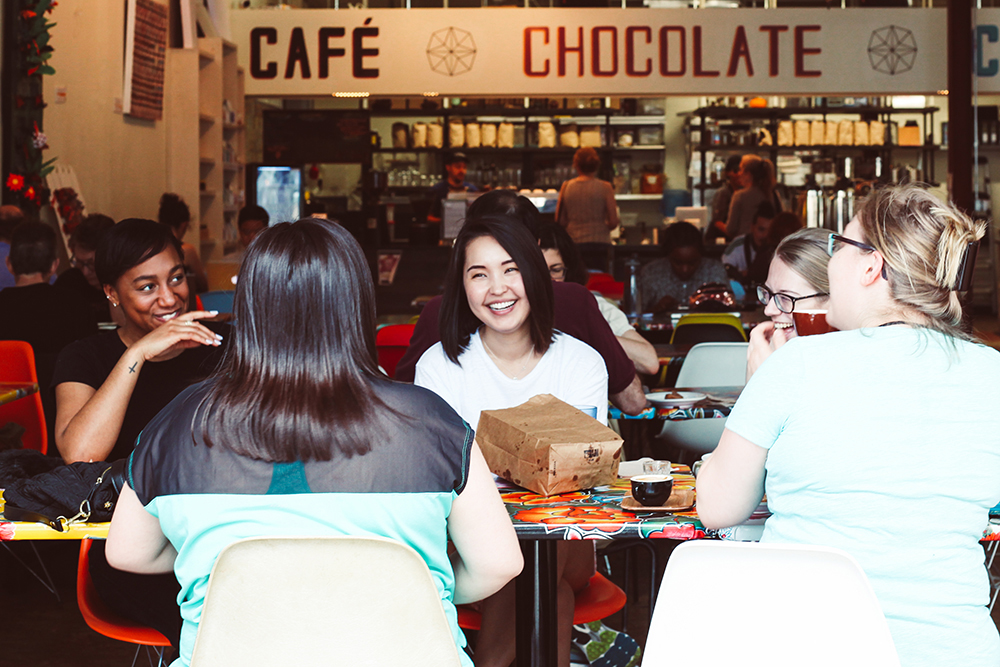 Customers revel in the menu and the community at Cocoa Cinnamon.

Barrera de Grodski believes that the most interesting part of coffee production is the many hands that touch it before it is actually served. With the Specialty Coffee Association's (SCA) addition of an Equity, Diversity, and Inclusion Task Force, many believe the narrative of the industry is broadening across gender, race, and sexual orientation. As a customer, I love nothing more than walking into the Chapel Hill Road location to see that piped spiral of dough singing itself into a churro, ready and willing to be drenched in orange, cardamom, or cinnamon sugar. For Barrera de Grodski, walking in and seeing the shop running without her is a considerably rewarding part of her day. While roasting and doing quality control, she says, "When the light is shining through and putting this beautiful glow on the coffee and it's magic hour, it's so beautiful." Her soundtrack? A Spotify playlist named Vibras, with cumbia, maybe some Sade, and Selena - "Always Selena."

I still want to see more change. I want to make sure that black people can thrive in our business, that they can see themselves here.

With such liberación in one establishment, am I wrong to taste its future ripening in the epic direction of mindful consumption? "I would hope that it would continue to be a space for the community, for the people that have been living here," Areli says, "and [that] we continue to do the work of being even more inclusive, particularly to the people of color that live in this neighborhood." A feeling like being in Mexico, some customers say. A familiar place, a comfortable place - yes, mujer, yes.

Jasmine Michel is a Muslim farm-to-table chef and zine writer. An alumni of The French Culinary Institute and the Eco Practicum School of Ecological Justice, she dedicates her work in food and writing to those of the marginalized. Her first chapbook, Jungle Woman, written while living off-grid on Maui, Hawai'i as a farmer and cook, is a declaration of self through healing and harvesting the jungle. @Jaz.Michel

Stef Bernal-Nartinez is a queer xicana documentary artist. Her work contemplates themes of identity, belonging and (the destruction of) borders. Perpetually in transition, Stef claims the West Texas borderlands as home and currently resides in Montgomery, Alabama. www.stefbernalmartinez.com