In the Himalayan Mountains of Kashmir, A Cheese-making Tradition Survives

At the workshop for Himalayan cheeses, Amna Gorshi works quietly - she is meditative as she pulls strings of cheese from a steel bucket. She hums softly and pats them out of one another and sits them on counters to cool. Gorshi started making cheese at the factory of Himalayan Cheeses eight years ago, when she was in her early 20s. The cheese she makes now, Kalari, is one familiar to her - her mother would make this elastic, soft dairy product growing up. Kalari is a cheese native to the Gujjar community of Kashmir, to which Gorshi belongs. It is also fondly called "doodh roti" or "milk flatbread", annotating its essentiality to the cuisine of the Gujjars: Kalari - nutritious, delicious - can be an entire meal in itself.

Gujjar food is simple, says Gorshi, as she recounts memories of her and her siblings waiting for her mother to finish cooking in their home, their elbows rubbing against one another as each one hoped to get the first bit of Kalari, the first spot of a hot roti to dab the cheese with.

Kalari is a symbolic food for us.

"We eat a lot of foods that we forage from the jungle," Gorshi says, "Like small onions, vegetables made from herbs, and rotis made from makka (maize). Kalari is a symbolic food for us; in my home, my mother used to make it from the cows that she owned. So it was an important part of our lives." 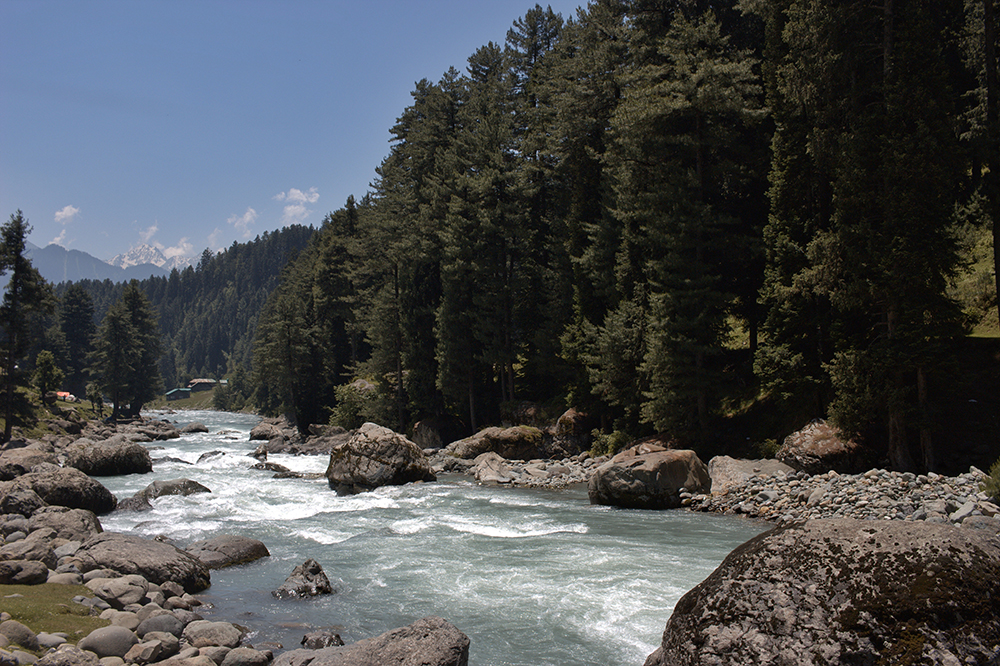 The River Lidder rushes throughout the valley of Pahalgam in the Himalayas.

The Gujjars are a nomadic pastoralist community that live between India, Pakistan and Afghanistan. Kashmir's Gujjars have lived on its land for centuries, and though they are some of the oldest cultivators of the region's lush landscapes, they live under a tribal status that keeps them from owning land. The Gujjars are rearers of cattle, and traditionally, makers of cheese. Kalari, the cheese Gorshi makes, has been an element of sustenance for their community for centuries.

Kashmir is known for its effusive beauty and grand cultural tokens, but most prominently for its ongoing civil conflict and military occupation by the Indian forces. Most recently, Indian Prime Minister Narendra Modi lifted Article 370 - a constitutional amendment that grants autonomy and special status to the Kashmir region, which has been stifled for years by the Indian state. Tensions engulf Kashmir once again; struggles of self-determination quelled by mainstream nationalism, the region's farmers left to battle a system that doesn't allow them to voice their concerns.

The biggest fallout from this, Gorshi says, is the unproductivity that comes with it. "That is why, in the factory, we work every day," she says. "Curfew or tensions, we have made systems that keep on running." 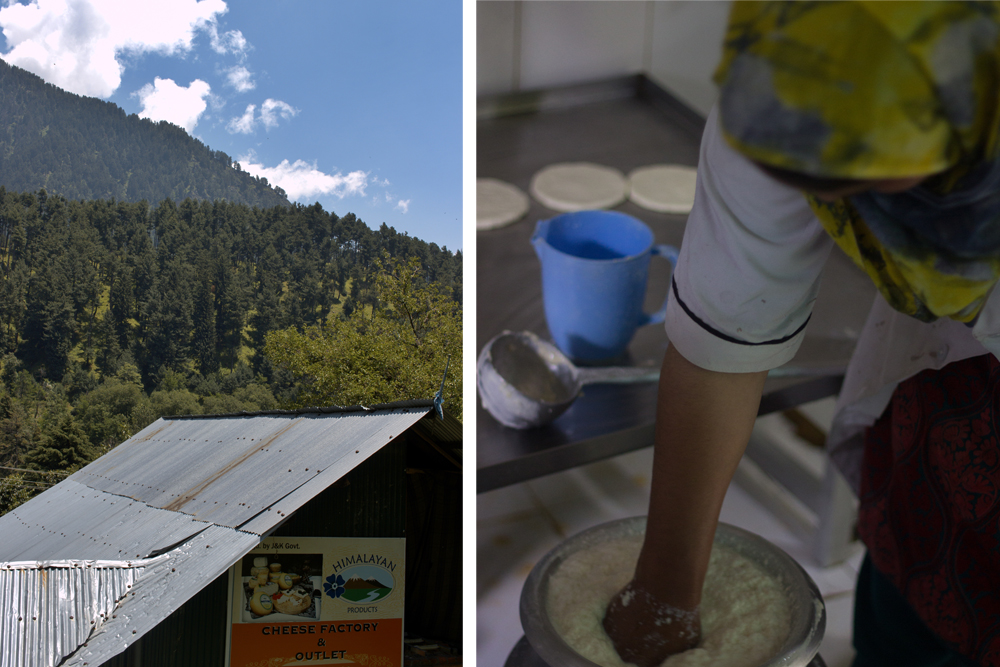 At a height of 7,000 feet, cradled in pine tree covered mountains, the Himalayan Cheese Factory was founded ten years ago in the Pahalgam valley. (right) Amna Gorshi checks the consistency of the Kaladi cheese.

Himayalan Cheeses is a small factory begun by Chris Zandee in 2007. Originally from The Netherlands, Zandee has created a product line that includes Kalari as well as cheddar and gouda (per Dutch tradition) but with "the flavors of Kashmir", as Zandee says. The factory lies in the outskirts of Pahalgam, or the valley of shepherds, a region in Kashmir known for its daunting beauty - landscapes that have inspired romance and poetry for centuries. The roof outline of Himalayan Cheeses appears out of nowhere, as suddenly as the chiseled mountains and shimmering streams that mark each spot of the valley.

Inside the factory, there are only two rooms: one in which the cheese makers work, and the second where the cheese is stored. Each cheese is infused with local ingredients: walnuts, nettles, and Kashmiri chilis. But the essence of their processing lies with the community of Gujjars that has been part of the cheese-making tradition of this region for decades. "We are the original cheese makers of Kashmir," Gorshi says, jokingly, as her colleague Shabbir Ahmed agrees with her and laughs. Aside from Gorshi and Shabbir, Gulzar Ahmed also takes care of the processes within the factory. "Every day we get fresh milk," says Gorshi, as Shabbir explains that the milk the factory uses is sourced from local farmers who are also Gujjars, like themselves. "So we have our own cycle in place, the farmers, us, and the customers."

The most important thing about food is that it should be nourishing, filling.

To make Kalari, the milk is set to curdle, then distilled, then pinched for stringy cheese that Gorshi pats into cakes, giving it its characteristic shape. Once it is done, the cheese is stored in a cold room where Shabbir and Zandee distribute it. "The other cheeses sell well, but the Kalari is liked by our customers," Gorshi says. "When Kashmiris eat it they remember eating it before. For others, it is something new, something like 'mozzarella', a cheese from some faraway country," she says, with a wave of her hand. "But everyone likes to eat it in their own way: either on bread, or fried on a pan with a bit of chili powder or honey." 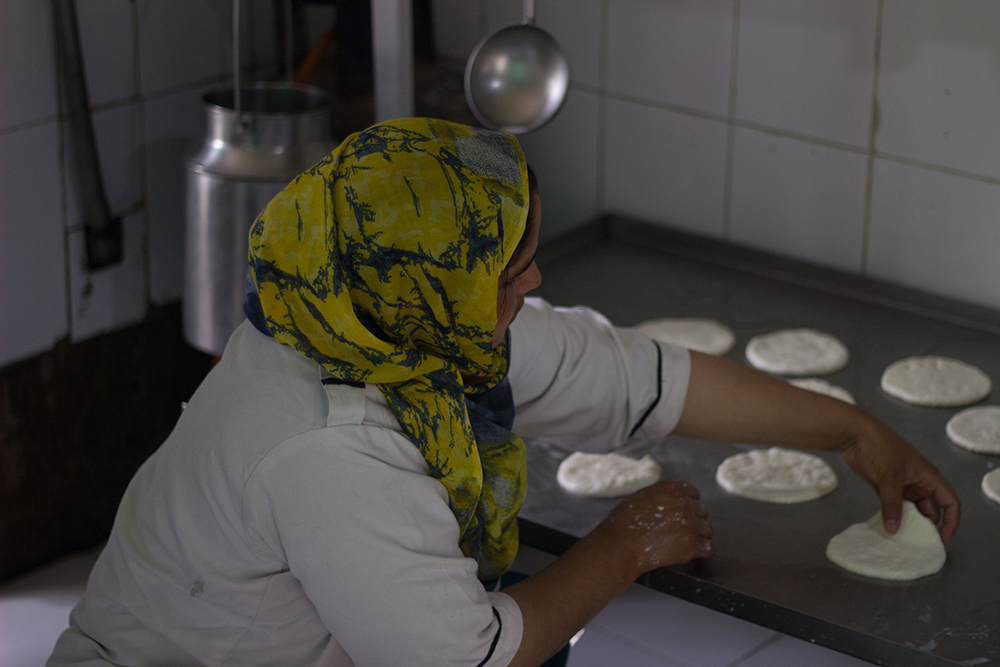 The Kaladi mixture is made into circles before Gorshi lays them on a huge steel plate to cool.

The impact of Himayalan Cheeses is twofold: it creates a space in which an ancient tradition can be preserved, and it also keeps Kalari alive, a food that may have lost its relevance and glamour in the face of those items that might be considered more quintessentially Kashmiri: stews like Rogan Josh, elaborate feasts of meat. "The most important thing about food is that it should be nourishing, filling," says Gorshi, as she drips buckets for weh: the residue from the soured yogurt that she will eventually cake into Kalari. "Everything else is secondary."

The cheesemaking helps me keep my traditions alive, but also be independent, so I can take care of my family on my own.

When Kashmir is spoken about, it is without attention to its peoples, those that make it what it is: the growers of saffron, the makers of cheese. In the late afternoon, Gorshi takes her first break of the day: a hesitant one, in which she drinks sweet tea that she dips biscuits in and out of, exchanging notes with Shabbir about the batch of gouda he made the other day, and looking around her with gratitude at the blue skies in the valley that can so quickly, and without warning, erupt. "This is Kashmir," she says pointing around, and then at herself. "Many people make it what it is." 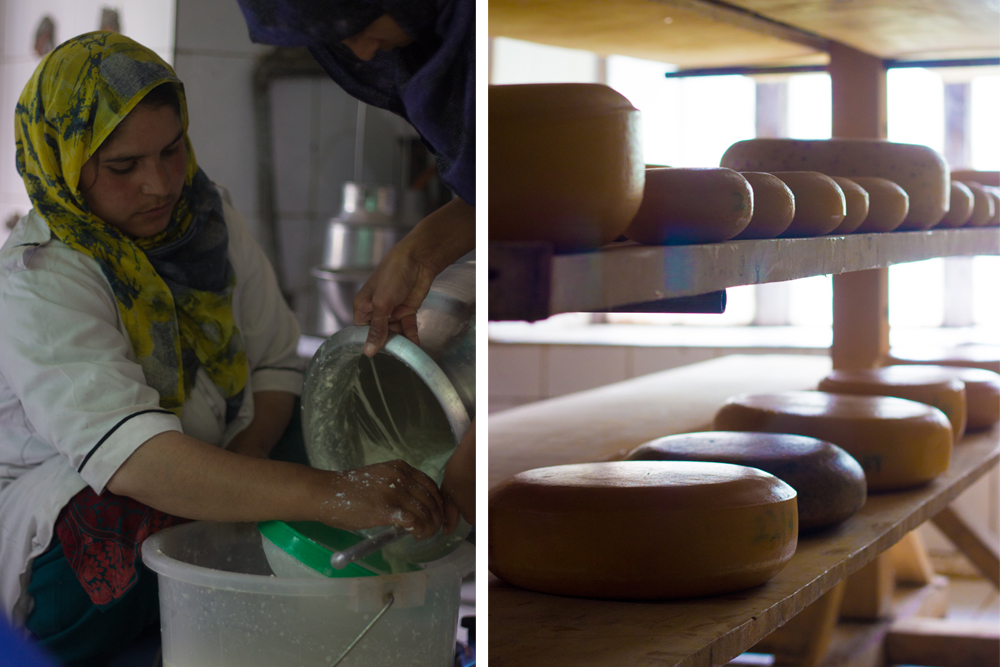 (left) Gorshi and her assistant filter the leftover milk from the Kaladi. (right) In the cheese storage room, cheddar and gouda rest with local variations, like walnut or oregano flavored Kaladi.

As her tea empties, she gets a phone call from Zandee: a new customer has ordered another batch of Kalari. Gorshi looks happy; she likes having more work to do. "Sitting idle is not in my nature," she says, as Shabbir stacks two steel buckets in a row for the rest of the day. When Gorshi returns, she will take some of the cheese back for her son, who has a taste for it: "Every day when I return [home], he asks for me the cheese." She continues, "Like my mother, I too make Kalari now. But it's also for business. The cheesemaking helps me keep my traditions alive, but also be independent, so I can take care of my family on my own."

Sharanya Deepak is a writer from and currently working in New Delhi. More of her work is available on her website.

Nawal Ali Watali is a freelance humanitarian photographer based out of India, and a social activist in Kashmir.

BACK TO STORIES
More stories in business, culinary, production