Selma Jensen picks me up from the train station in a white two-door Fiat. She's just come from the apartment she shares with roommates in the city of Copenhagen, Denmark. Her blond hair blows in the wind, and her lacy black shirt reveals a couple of tattoos. At 28 years old, Jensen is a skilled farmer with a degree in agriculture. But she's pursuing a concept they didn't teach in school.

When we arrive, she leads me across a thick grassland, scanning for the herd of Jersey bulls that have become her life's work. Jensen begins her story with her first dairy farm internship:

"I came out there completely young and naïve... We were taking care of calves as they were born, and when I went to do the same with the bull calves, [the farmer] was like, 'Oh no, no, no. It's a bull. Let it be.' And I was like...okay? Do what? For how long? And that's when I realized the fate for all these Jersey bull cows. They live for minutes, an hour, maybe."

she's pursuing a concept they didn't teach in school.

Jensen soon learned that this is standard practice in the Danish dairy industry: 25,000-30,000 bulls meet this fate each year. Jersey cows grow slowly, eat a lot, and stay relatively small; for most farmers, raising them doesn't make economic sense.

"Obviously, I couldn't change any of that," says Jensen, "I'm not unrealistic. But it was wrong in such a way that I thought there must be something we can do about this. That's where the dream started. I needed to figure out how to make some sort of use for these Jersey bull cows." 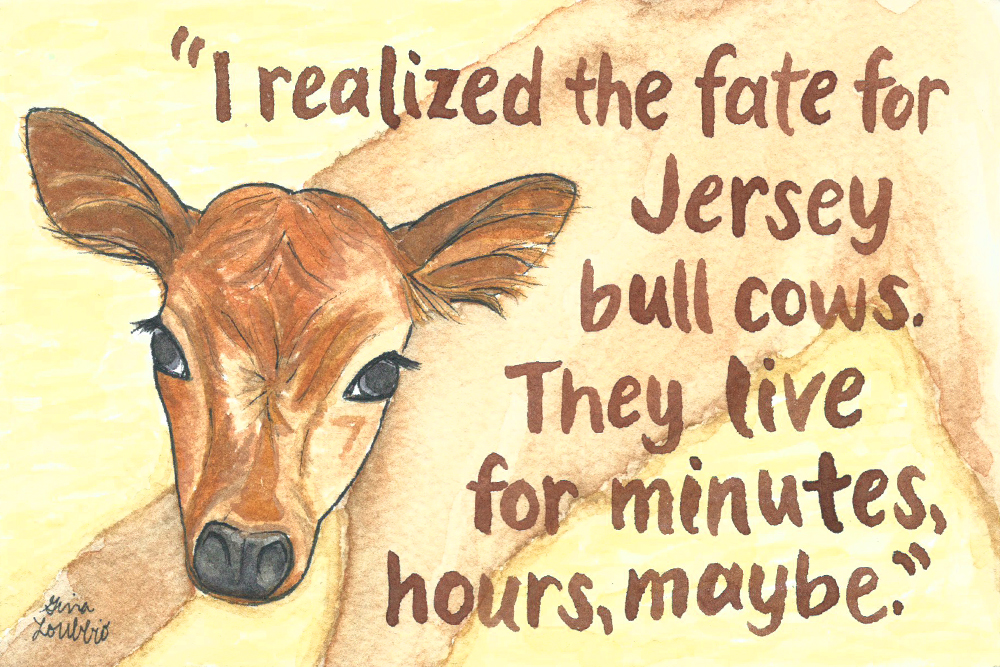 Certain places in Denmark  can be preserved for historical or biological reasons, as designated 'high nature value areas.' However, left untended, they will be overtaken by weeds. One option is to send a municipal employee to clear-cut the vegetation periodically, and as Jensen says, "That's not better for the area or more natural than having animals grazing." So she thought, "I know some cows that graze...and they need a job! Can we combine this?"

With conviction, Jensen made the leap from her parents' place in the farming heartland to the capital region of Zealand, where Copenhagen is located. She knew the ingredients for her farm were here; she just needed to find and combine them: "I made a Facebook post on a horse-boarding page, and it went super far. A journalist found it and called me for an interview. Through that, I found an apartment and a barn." 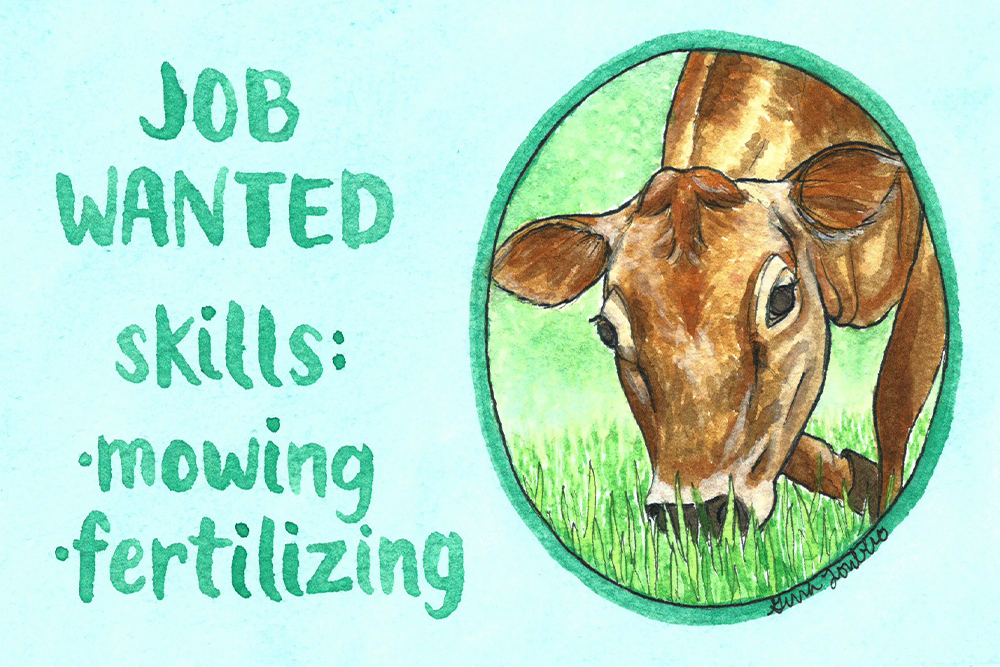 Another kismet interaction between a butcher and a 75-year old entrepreneur connected her to this patch of land. With that in place, Jensen called every Jersey-breed dairy farm on Zealand and asked what they do with their bull calves. Soon, she'd cobbled together enough 'yeses' to start her farm, which she named 'Ungtyren' or 'Young Bull.'

Now, after two years, some of the bulls have reached maturity. Soon their bodies will become meat that nourishes our own bodies. The slaughter occurs on the property. One moment the cow sticks his muzzle into a bag of candy-sweet grain; the next, it is over.

If you're a sustainability-minded food enthusiast, I'd guess you're either reading this story with extreme enthusiasm or with extreme skepticism. It seems that beef has polarized us. On one hand, it's can be taboo for a self-declared environmentalist to eat meat. On the other, consider that grazing animals take in flora and fauna on one end (including invasive plants that need to be curbed), and give back a nourishing fertilizer on the opposite side. It's hard to imagine how we can regenerate our depleted land if we're missing an essential piece of the system: livestock.

It seems that beef has polarized us.

This tension is what drew me to Jensen, as she claims to be raising 'possibly Denmark's most CO2-friendly beef.' I inquired about her philosophy:

"I don't believe that we're not supposed to eat meat, but I want us to do it with a good conscience for the climate, the [land], the animals. I do believe these guys have a good life. I do believe they do something good for this place," Jensen gestures to the lush pasture, "I can see how it thrives each year they've been here. It gets better and better."

"I completely get it - I hear what [plant-based advocates] say and I see a lot of the points..." she trails off, referencing industrial-sized feedlots, struggling to comprehend how her farm could even compare.

"But to make this [gesturing out] unnatural, and to say that these cows are destroying the climate... What about the coal? What about the oil industry? What about the clothing? What about how we waste water? There's so much we need to do to take care of this place, but to just say, 'I'm only eating vegetables, so I'm saving the planet,' and 'You have a cow, so you're a bad guy'" - a cow reaches over to nuzzle her at that moment, as if to say, 'Hey, I'm not a bad guy!' - "It's so much more," she pauses to find the word.

"Nuanced," I offer. Yes, it should be more nuanced, she agrees. 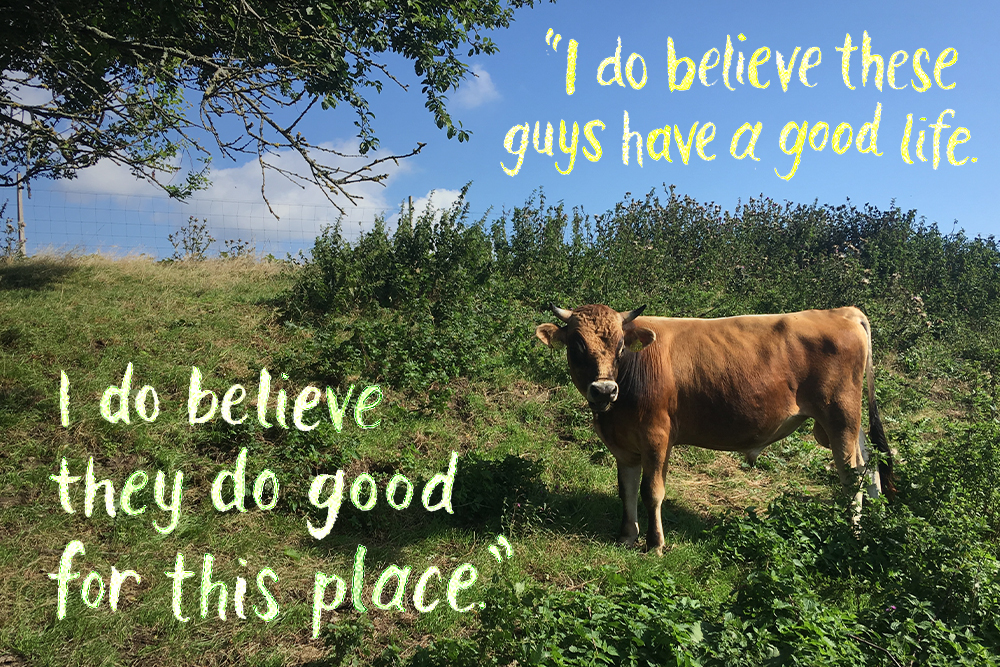 Jensen has also brought her creative mindset to the way she's building her farm business. "I don't own a farm...I rent [land] for the summer, and I rent a barn for the winter. I don't think it's the typical way to [build things up], but it's made me more comfortable. I know that even if everything goes wrong, I can sell the animals, get out of it and say, 'ok I tried this. It didn't work out. I might need to rearrange the dream.'"

For now, the dream is to devote herself full-time to Ungtyren. Until then, she contracts her services to other farms to supplement her income.

"It is small. I'm not saving the world with 20 cows, and there's a long way up to 25,000. But I hope by doing this, maybe some farmers would say, 'there's this crazy, young girl running around Zealand feeding up these bull calves - maybe I can do something similar. If she can make it work, maybe [I] can, too.'"

With that, she hops back in her tiny Fiat, heading to a farm up north where she'll drive a 45-ton tractor to earn the money she needs to keep chasing the dream. 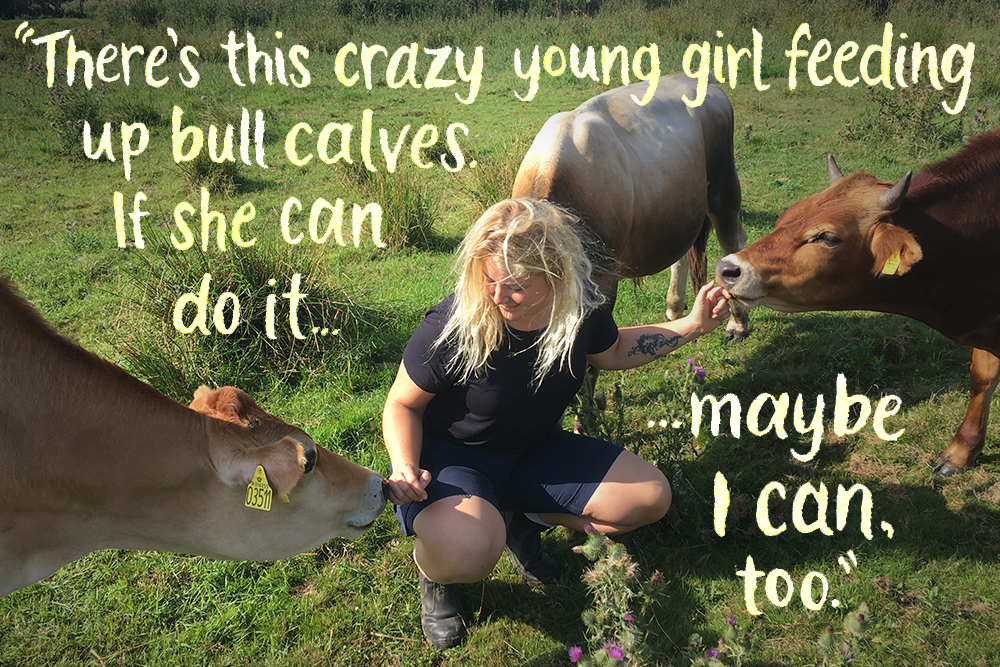 Selma Jensen, above, with some of her young bulls at Ungtyren farm.

Gina Lorubbio makes art about food and culture that puts wisdom and practical inspiration within reach. To buy her artwork, commission an illustrated recipe, join an educational cooking trip, or follow her current series on everyday home-cooking, visit www.americanheirloomproject.com.