A Garden to Grow the Community: Washington D.C.’s Hustlaz 2 Harvesters

Wallace Kirby and Boe Luther grew up in Clay Terrace, a public housing development in Washington, D.C.'s Ward 7.  Located on the east side of the Anacostia River, the predominantly Black neighborhood has been plagued by poverty, violence and drug activity. Though they didn't know each other well growing up, they are now partners in Hustlaz 2 Harvesters, an urban agriculture enterprise intended to revitalize their community. The Dix Street Garden, as their space is called, sits across the street from the Clay Terrace development, and Kirby and Luther have built the garden completely from scavenged and donated materials.

A lot of the families who moved into public housing had come from the South and turned their little yards into gardens.

The two share a deep connection to the neighborhood. Luther, 54, likes to say that he was born and raised on the living room floor right around the corner from the garden. Kirby, 62, grew up close with Boe's uncle. Both men remember what the garden space was like when they were kids -an active community space lined with berry trees. A lot of the families who moved into public housing had come from the South and turned their little yards into gardens. "Almost every house throughout our community had gardens," says Kirby.  "There was always something going on right here," says Luther. The area was once a thriving black economic enclave. 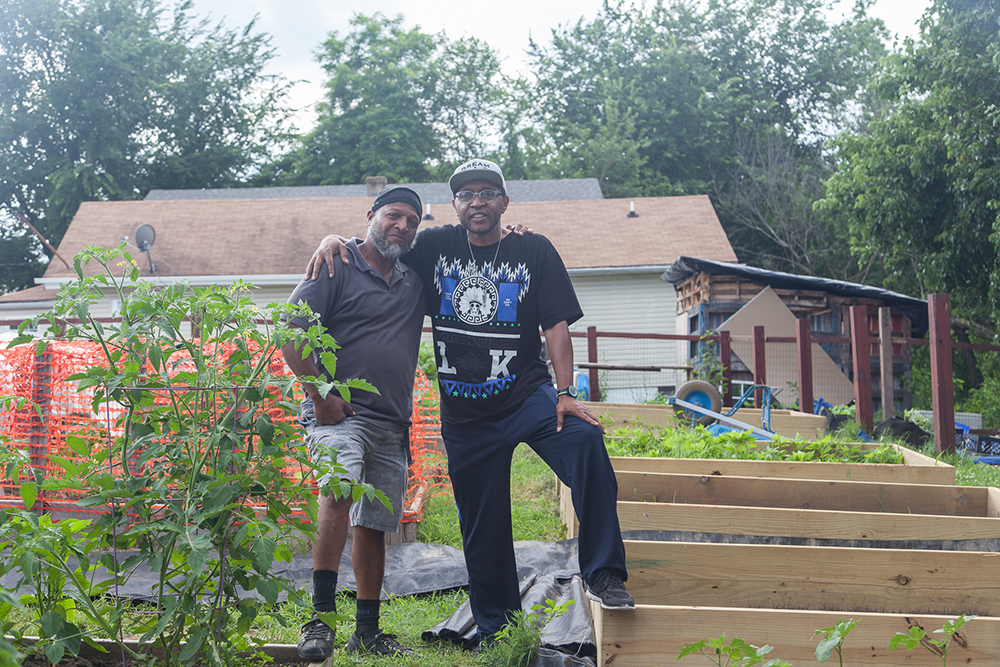 The defining moments in each man's life happened right there. Luther's mother was killed when he was 4 years old, and he lived for four years with his grandmother until social services came to put him in a foster home. "Back then, [the '60s and '70s] they didn't care about us like that. They just separated us." He felt he had to make a decision: to get lost in the foster care system - which is what happened to his brother, who he has never seen since - or be sent to an institution for "problem children," essentially a jail. He chose institutionalization, so that when he got out he'd come back to his grandmother. He was in and out of jail for the next 30 years.

We were almost literally starving.

Kirby's defining moment came in 1968 after the assassination of Martin Luther King Jr., when DC erupted in riots. "I was 11 years old, in elementary school," he says. "I was an A student. I had a promising future ahead of me. When the riots happened, the National Guard was set up around the perimeter of this area, and they had us under siege up here. We were almost literally starving. All the little stores around were looted out, and they had us under this curfew. We've seen our mothers beaten up by the National Guard; they locked quite a few of them up, and they ended up in these little concentration camps they set up during that time. We didn't know where our parents were. We couldn't contact them. It really traumatized me to the point where I was so full of rage. No adult could answer any questions I had about why were we being treated like this. The rage made me feel like, 'What kind of system is this?' 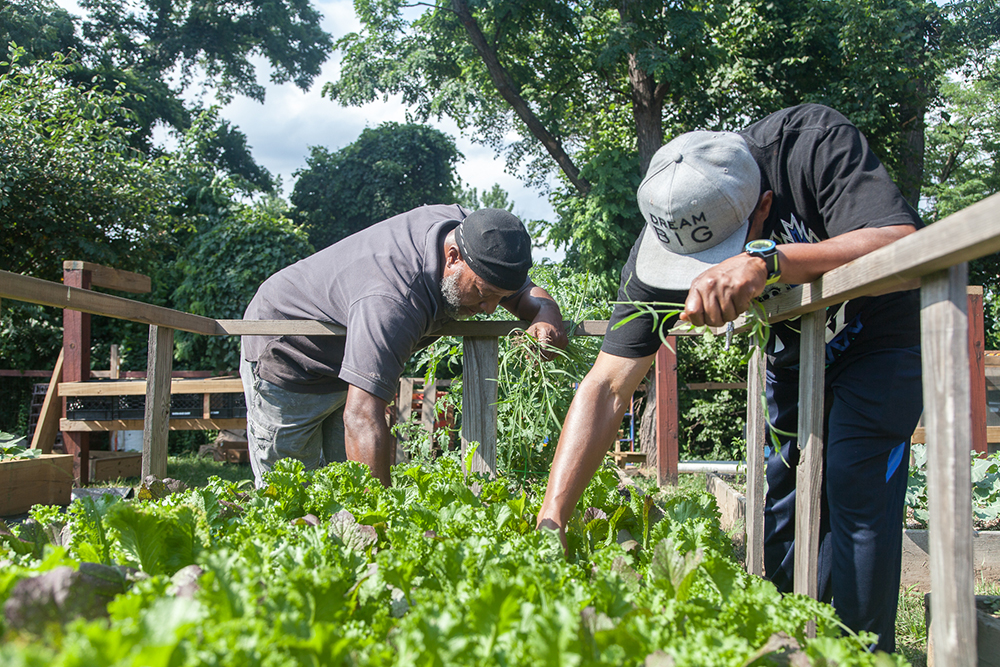 Boe Luther (left) and Wallace Kirby (right) weed one of the raised beds in the Dix Street Garden in Washington D.C.'s Ward 7.

"When it calmed down and we were ready to go back to school, I was like 'I'm done with it.' I knew that without money we were nothing." The same way Kirby applied himself to his education, he applied to learning how to hustle from the older guys in the neighborhood. "The whole purpose was for us to bring X amount of that money back to the community and make sure everybody in the community who needed help was taken care of."

The neighborhood Kirby grew up in never recovered from the riots, and when he returned in 1995 after serving 23 years in prison, the city was in the midst of a crack epidemic. "It was one of the scariest things I had ever seen. Almost everybody was on that stuff. I'm observing all this and it's eating me at the core because I look back and I say to myself: We kind of set the platform for this. When I seen what was going on, I thought, there are probably enough of us who transformed themselves in prison, understand what happened to us, what happened to our neighborhood, what happened on a social and political level. We can come back and we can really start this process of transforming our neighborhood back to when things were really a community."

We can come back and we can really start this process of transforming our neighborhood back to when things were really a community.

Thus began a long journey as a powerful and effective community organizer, partnering with various nonprofits to make inroads into a violent and devastated part of the city that most entities had shied away from. "It was scary; they were finding bodies up there every week." He was working with a public housing development when he met up with Luther again, now out from serving 13 years straight in prison, and they worked together on various community projects.

Adjacent to the neglected Clay Terrace garden sat a sweet little house owned by Miss Mary Morgan. The garden was overgrown with tall weeds and had become a prime location for drug dealing. Scared out of her wits by what was going on outside her house, she asked Kirby and Luther if they could help. It took a few years, but eventually they received permission from the DC Department of Parks and Recreation to restore the garden space, but the department didn't provide any funding. "So we just started building," Kirby explains. 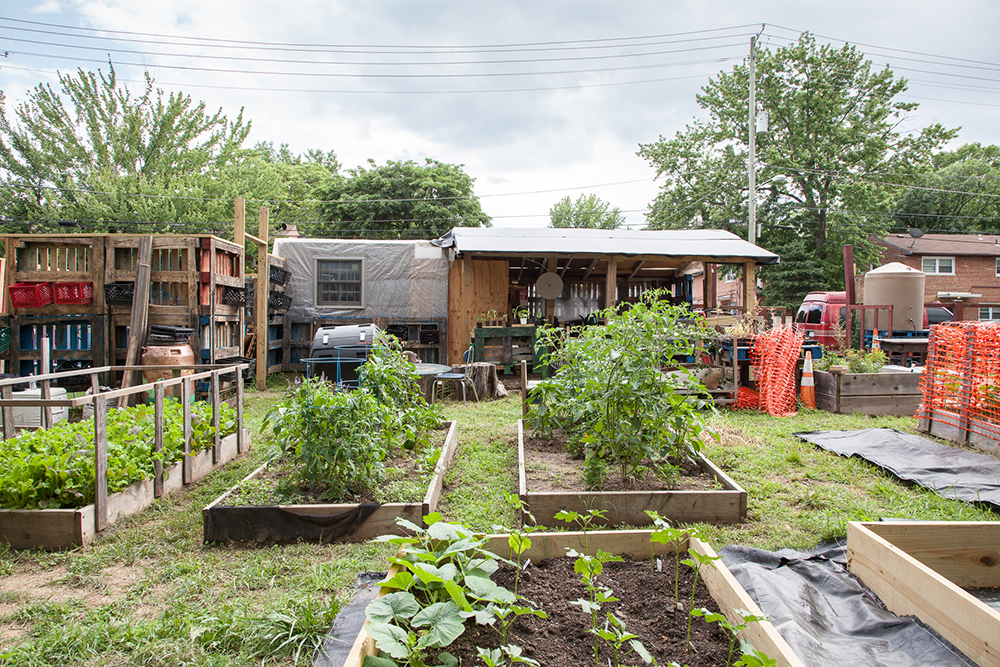 The Dix Street Garden, built from scavenged and donated materials.

Luther once sold ice cream and snacks in the neighborhood out of a truck he owned, so at the beginning they worked out of the truck. Everything in Dix Street Garden is built from scavenged pallets and milk crates, and they do everything they can to maximize the small space, such as growing vertically and using grow bags. "We took all the trainings that DPR offered. We got trained as Master Gardeners, Master Composters, carpenters. Then we got trained at the University of the District of Columbia (UDC) in permaculture, hoop house building, aquaponics/hydroponics, nutrition." They also learned about entrepreneurship. They received a 2-year USDA Sustainability Grant for the work they are doing with ex-offenders and marginalized individuals.

They started to imagine how they could address the food situation in their community. "But," Kirby explains, "food deserts are not just designated deserts because of the [lack of access to] food. It's also those social factors, like unemployment, underemployment. The crime. All of that is factored in to get those designations. So we don't want to just produce food, we also want to create vocational training and workforce development training and create economic opportunities for people. There's a lot of mental health issues in this area, so we wanted to provide training and employment opportunities for people with intellectual disabilities."

This farm is run by us, with us, and for us in the community.

Kirby and Luther have seen expensive initiatives get funded to help the community and then go nowhere. "On paper they've got stuff being done in this neighborhood," says Luther, "but if you drive up and down the streets, there ain't nothing being done here." The two are angered by individuals from outside the area who come in having secured lots of grant money but don't actually help the people who live there. They are benefitting personally without fulfilling on their promises. "We call them Poverty Pimps," says Luther.

"But this farm is run by us, with us, and for us in the community. We're here seven days a week, doing things with the community." There is a steady stream of residents stopping by throughout the day to say hello and check out what Wallace and Luther are up to. 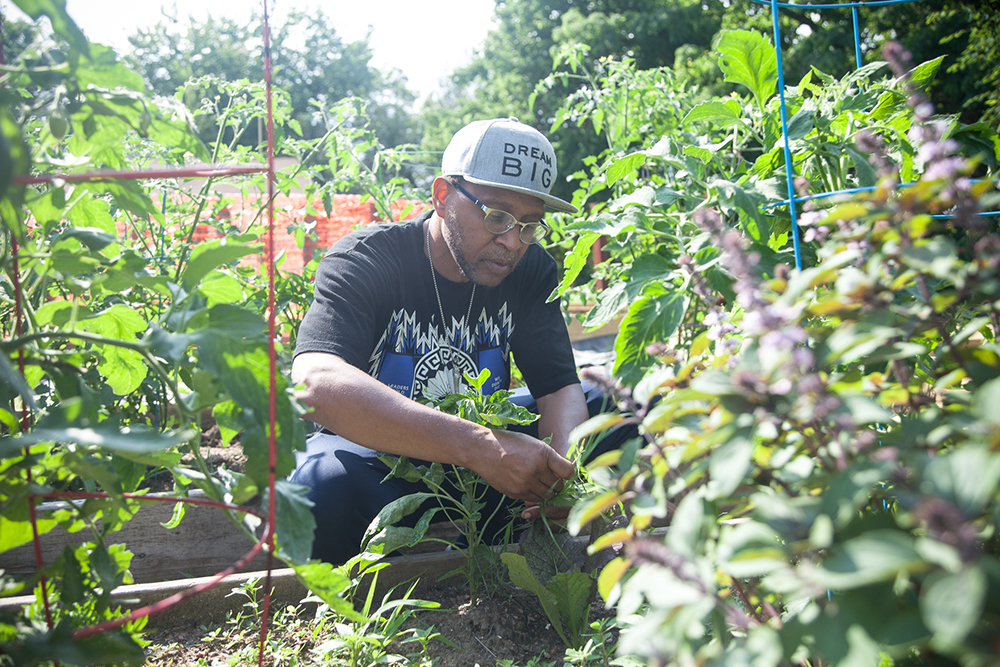 Wallace Kirby, co-founder of Hustlaz 2 Harvesters, weeding around some basil and tomato plants in the Dix Street Garden.

The two men have big plans for what they'd like to do with the garden space and their community work. They have partnered with DPR to train people in how to build benches and raised beds out of pallets, which will be used in DPR gardens throughout the city. Kirby and Luther are also training people to maintain the neglected gardens. They want to collectivize the various community gardens in the city, so that the garden managers will know exactly what they are growing to address the health needs of the community. "If X amount of people in the neighborhood have diabetes, for example," says Kirby, "what are things we could grow among all the community gardens that we could either sell or give to them? We're trying to put some sense into it so it works for the health needs of this community."

Most of us eat the way we do because we've never been educated about it.

They plan to use the ice cream truck as a place for cooking demos. They also are working on a children's research center, and are building tables with umbrellas where people can sit and eat. They are working with other partners on green career workforce development, specifically for ex-offenders. So many of their plans hinge on securing funding.

Both men see the garden as a vehicle, both for community enrichment and empowerment as well as for food education. Says Kirby, "Most of us eat the way we do because we've never been educated about it. How does the average person learn about food, if nobody's going to educate them right there in their own neighborhood? You can educate people in a lot of ways."

Lise Metzger is a freelance photographer based in Washington, DC, who taught photography many years ago at Lorton Reformatory, the prison where Boe Luther served his time. She writes and photographs the project Grounded Women: Stories of Women who Farm. She is a tireless advocate for a healthy and just food system, and as a CSA site host loves to connect people to the source of their food. You can find her at www.lisemetzger.com and www.groundedwomen.com and on Instagram as @groundedwomen.

BACK TO STORIES
More stories in agriculture, culinary, nonprofit