While many public sites of violence and resistance are urban ones - Ferguson, Charlottesville, Chicago  - for lawyer Savi Horne, social justice is less concrete and asphalt, and more undulating shades of green. Her fight is on the farm.

Horne stands at the helm of the Land Loss Prevention Project, an organization that works against state-sanctioned injustice. Black land loss is a problem rooted in abuse: systematic denial of loans and services to black farmers by the USDA; predatory development practices targeting black landowners; a legal system that's been historically used to undermine, rather than protect, the rights of black landowners. Half a century after the Civil War, black land ownership peaked in the United States at about 15 million acres in the 1910s. By 2000, some estimates found that black-owned acreage fell dramatically - by as "little" as 50% (to 7.8 million acres) or as much as 90% (to 1.5 million acres). Those divergent numbers are nearly two decades old; poor and infrequent data collection indicates the low priority placed on this issue at the federal level. It's easier to perpetuate a system of abuse when there's no record.

It's easier to perpetuate a system of abuse when there's no record.

Although Horne's work lies at the center of a conflict that's particularly American in its intersection of economics, politics, property, and race, she first became aware of the importance of land in Zimbabwe. There, Horne worked with limited resource smallholder farmers who were building an oilseed co-operative. At first, it wasn't clear how this related to her social justice-focused law degree; but as she observed how the co-operative structure helped farmers bundle their resources to obtain greater financial security, the ties between agriculture, land, and equity came into focus. Back in the States, Horne went to work for Democracy South combatting the impact of concentrated animal feeding operations (CAFOs) on the communities and waterways of Eastern North Carolina. Through these "hog roundtables," she connected with limited resource farmers. And from there, it was a small leap to issues of land loss. In 1998, Horne was hired as an attorney for the Land Loss Prevention Project. In 2005, she was named Executive Director.

Founded by the North Carolina Association of Black Lawyers in 1982, the LLPP combats this decades-long phenomenon of dispossession. By orchestrating on-the-ground legal stop-gaps, Horne and other attorneys at the LLPP nurture trust where it's been systematically violated for nearly a century. Having pursued this work for thirty-five years, the LLPP's purpose remains as vital as ever.

Black farmers finally feel they can go to government programs for support, and the LLPP helps facilitate those connections. "That's created a sea change in the community," Horne says - but one that may be in jeopardy.

One way the LLPP keeps land in black communities is by connecting black farmers with the resources they need to thrive. In 1999, the USDA settled a class-action discrimination case - Pigford v. Glickman - acknowledging that the agency had systematically denied loans and services to black farmers on the basis of race between 1983 and 1997. Programs created post-Pigford, Horne says, "have been pivotal in trust-building." Black farmers finally feel they can go to government programs for support, and the LLPP helps facilitate those connections. "That's created a sea change in the community," Horne says - but one that may be in jeopardy. The next Farm Bill looks like it will include programmatic reorganizations that could undermine key relationships that socially disadvantaged farmers rely upon to access USDA resources. So Horne is looking at alternatives, hoping to partner with local community-based organizations to ensure the continued provision of essential services. 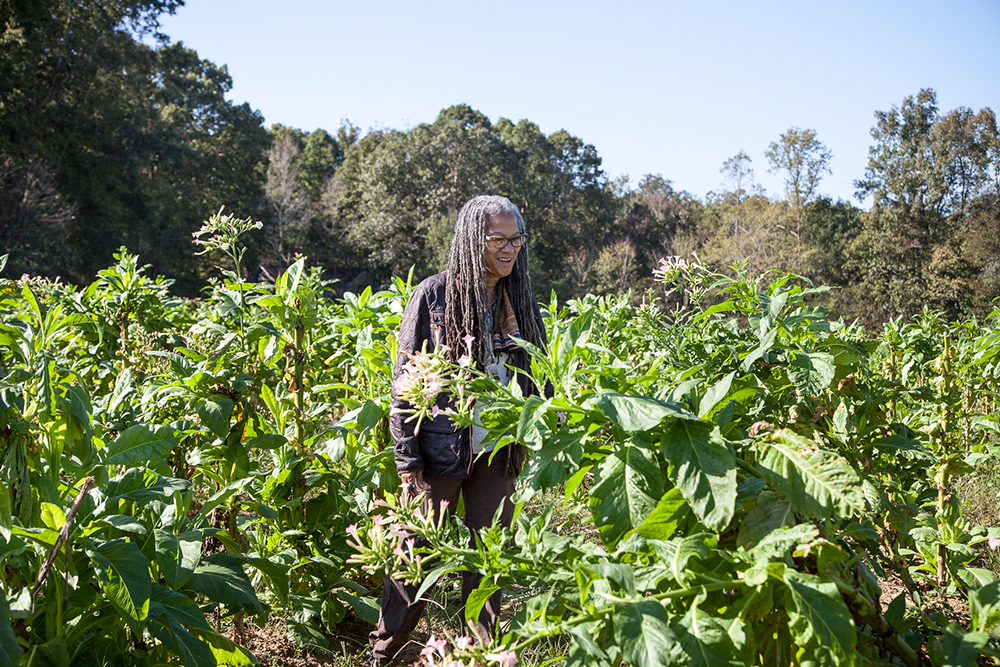 On a visit to Pine Knot Farms, near Hillsborough, North Carolina, Horne looks over a second growth tobacco crop.

An unstable USDA is just one of many concerns keeping Horne and the other LLPP attorneys busy. Another is what's known as an heir's property dispute, which some believe have led to around half of the loss of black-owned farmland since 1969. These disputes arise when a landowner dies without a will, causing all offspring to inherit the property with equal ownership shares - and no clear title. A developer aware of the tenuous position of un-willed heirs needs only to buy out a single share in order to force a partition sale (a move currently permissible by law in all states), and thus wrest an entire property away from a family without their consent.

This predatory practice is finally getting some attention: in the last two years, ten states have passed legislation limiting the possibility of this kind of sale, and a bill introduced at the federal level bolsters the rights of farmers operating in an heirs' property situation. While waiting for supportive legislation to hit the books, Horne has directed the LLPP's focus toward farm succession planning, which can prevent issues like heirs' property disputes from the get-go. From Horne's perspective, it's a basic part of risk management.

Also in the land loss prevention toolbox are unconventional ownership structures. "In assisting farmers, we really care about how they are securing the land they wish to farm on," Horne says. "If there are multiple farmers, we're looking at how the farmers can use a corporate cooperative or collective structure to meet their goals." By using a business structure like an LLC, Horne says, "farmers coming out of an heir-property situation...are able to pull the resources together to manage the land through that structure." From there, "they can begin to develop a farm enterprise structure that's diverse, so that it can withstand instability." 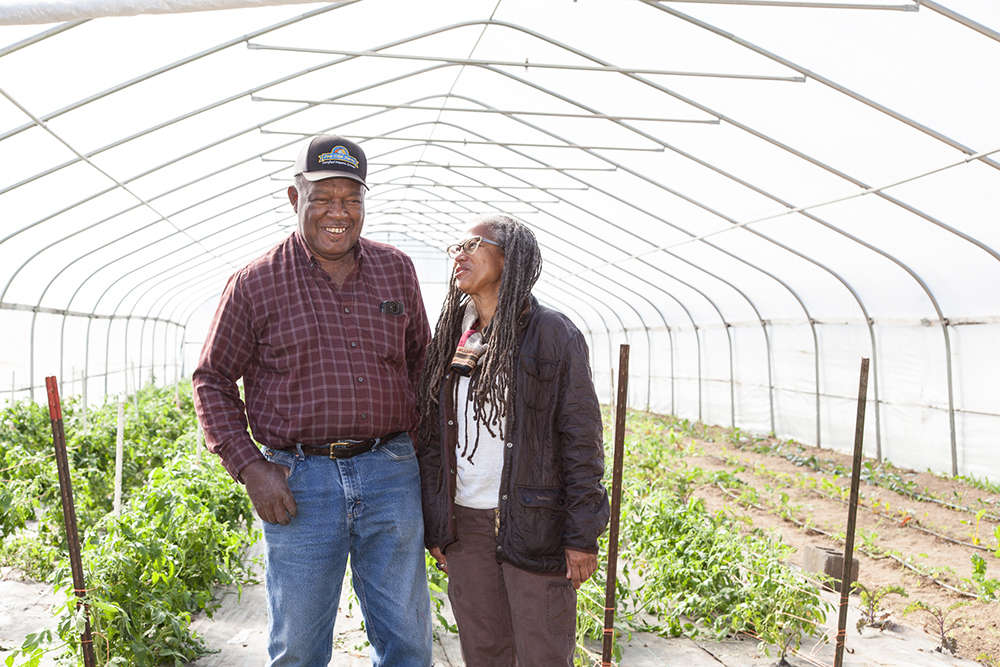 Horne visits Stanley Hughes, owner of Pine Knot Farm, in the greenhouse. Hughes is a founding board member of the Land Loss Prevention Project. A 3rd generation farmer, he grew up on the property, and his primary crops are vegetables and certified organic tobacco.

To Horne, accessing the stabilizing force of diversification means looking beyond production agriculture. She's inspired by young urban farmers who are pooling resources to build value-added facilities, storefronts, and even food hubs, complete with educational programming and the capacity to market to larger institutions like schools.

Horne admires the way urban farmers innovate by "using what is there" - lots of people, access to retail markets, proximity to institutional buyers. This same thinking can (and should) be applied to rural areas, she says: "And what is there is a lot of churches." Underutilized, sometimes vacant, Horne asserts that, "We need to reposition the ubiquitous presence of churches in rural communities and reengineer churches to become centers of producing food, distributing food, and also educating people around food and the need to participate in local agriculture boards and be civically engaged." All of which requires expertise in an entirely different legal specialty: church law. For Horne, coalition-building is a central theme.

To build the coalitions necessary to realize the many projects encompassed by Horne's vision for the future of Southern agricultural land tenure, one thing is essential: more lawyers. "I see a pressing need," she says. "Of course you need more farmers, but you also need people providing technical assistance for those farmers." And, she adds, "It needs to come from people where there's trust" - people with existing relationships to the communities with whom they hope to partner.

The question of how a person can pursue a career in agricultural justice law has many answers.

The question of how a person can pursue a career in agricultural justice law has many answers. "I do believe one has to be very creative in their approach," Horne says. "If you have the drive, the desire, you can make it work," but the path may not be clear-cut. Only a handful of law schools in the country (see below) offer programs that specifically equip students to work in food and agriculture. Most programs aren't in the South, and many, Horne says, are falling short of meeting the needs of socially disadvantaged and emerging farmers who tend to be more interested in organic agriculture and sustainability than average. If none of the specific food law programs are right, Horne says, "You can bridge it," with internships and work experience. "It forces you to...be very creative in pulling together the kind of curriculum that will advance your career."

The process of rebuilding trust in the wake of violation is far more complicated, and slower, than that of breaking new, fertile ground. With the Land Loss Prevention Project, Savi Horne has grown a legal institution that not only deals in, but is also worthy of, trust. There's a tremendous amount of damage to undo when it comes to land tenure in the American South, and a tremendous amount of new territory to chart. Both demand creativity, persistence - and a law degree sure doesn't hurt. Who's ready?

If you raised your hand, read on.

Resources for those interested in pursuing a career in agricultural justice law:

Sophie Mendelson is a Midwest-newcomer working toward her PhD in Agricultural Education at the University of Missouri-Columbia, where she focuses on adult education within complex, small-scale farming systems. She's an alum of the Farm School in Athol, Massachusetts and the Yale Sustainable Food Program. You can find more of her recent work here and here.

Lise Metzger is a freelance photographer based in Washington, DC, and the writer/photographer of the blog Grounded Women: Stories of Women who Farm. She is a tireless advocate for a healthy and just food system, and as a CSA site host loves to connect people to the source of their food. You can see her work at www.lisemetzger.com and www.groundedwomen.com and on Instagram as @groundedwomen.