Nestled deep in the rolling hills of northern Kyoto, Japan, lie the quiet and unassuming gardens of Hello Farm Organics, a market garden run by Ava Richardson and Zenryu Owatari. For the last seven years, Richardson and Owatari have operated and expanded their small business to provide fresh, organic produce to local restaurants, wholesalers, juice bars, and individual customers in the Kyoto area and beyond.

"I didn't come to Japan thinking I was going to farm," Richardson admits.

Growing up in the heart of Tokyo, Owatari's path into the world of food business was far from linear. "I've been interested in farming since I was a teenager, maybe instinctively," Owatari reflects. "I've always liked to grow vegetables. But I never thought I would start my own business."

After completing his first apprenticeship on a farm in Nagano prefecture at eighteen years old, Owatari's interests shifted to spirituality and religion, eventually leading him to become ordained as a Zen Buddhist monk. When speaking of the experience, he maintains that his religious practice was a natural progression of his food journey, rather than a separation from it. "I always liked working with food, so my teacher asked me if I could cook at the temple," he explains. With no formal training, he worked both in the gardens and the kitchen, serving as head chef for twenty years.

Owatari maintains that his religious practice was a natural progression of his food journey, rather than a separation from it.

For Owatari, gardening brings constant opportunities for meditation. "Zen practice and farming are very connected. It's mindfulness," he says, choosing his words slowly and with precision. "In the gardens, you talk with nature and become one with it. When you say, "I don't want to weed, I don't want to work in this heat... that's the self. That's the ego. So I feel I'm still doing my Zen practice while farming." 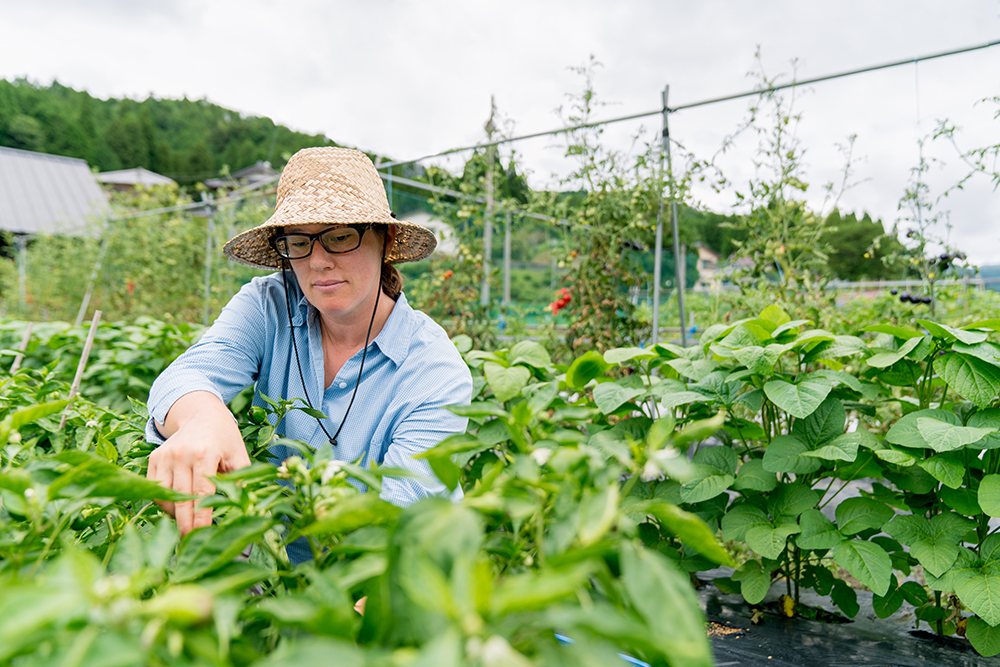 Ava Richardson tends to the vegetables on the farm she shares with her partner, Zenryu Owatari.

After leaving the temple to pursue other walks of life, Owatari met his wife and business partner, Ava Richardson, while managing a friend's hostel. When asked about their decision to start a farming business together, the two share a laugh. "I didn't come to Japan thinking I was going to farm," Richardson admits.

Though she intended to teach in Japan, Richardson recalls that her journey into the organic food movement started years earlier, in her home province of Ontario, Canada. "My dad had a stroke at the age of 40, which led us to try to be healthier and eat healthier," she explains. "I didn't even know what the word 'organic' meant. I knew that I wanted to be involved in food in some way, but I didn't predict farming." She began working at outdoor education centers during the academic year and apprenticed on organic farms in the summer: "Apprenticeships are key because they will either confirm that you want to [farm] or don't." 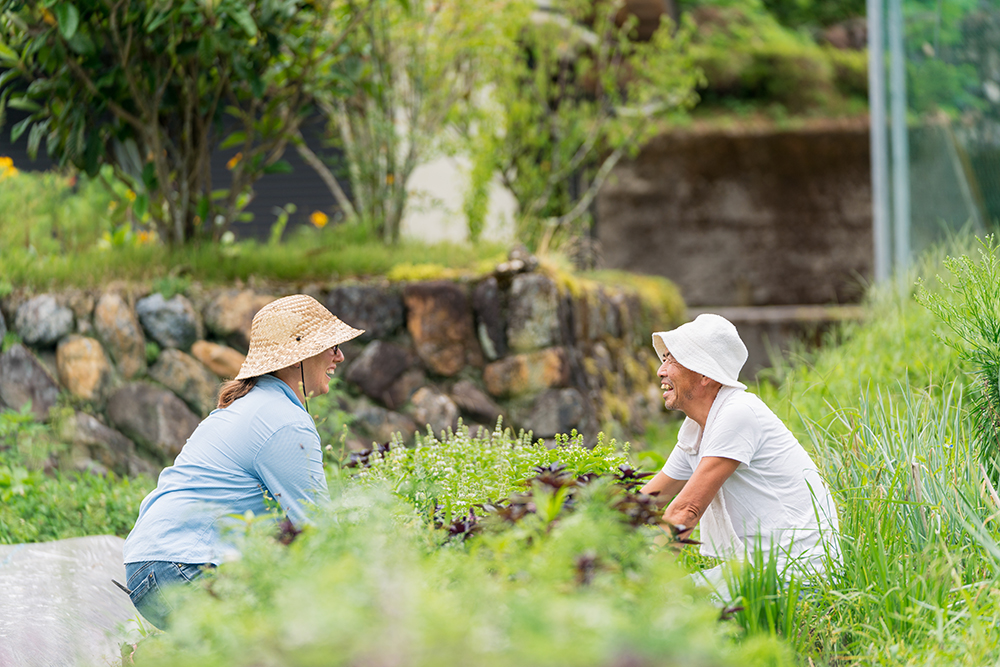 Richardson and Owatari keep each other company at work in the gardens.

Following her apprenticeships, Richardson went on to co-own a CSA (community-supported agriculture) for four years before leaving for Japan. "I sold my farm in Canada, flew here to look for a teaching job, and then started working at a hostel where I met Zenryu. Within two months, I had a garden started," she laughs. "The owner was like, 'Sure, we could use a garden!' and before I knew it, I had a rototiller and was growing vegetables for this hostel."

After moving to the countryside of Ibaraki prefecture together for Richardson's job at an international school, Owatari found work as a full-time hand on a nearby organic farm. "But less than a year after that, Fukushima happened," Richardson recalls, referring to the  2011 Great East Japan Earthquake, the most powerful ever recorded in the country's history. The aftermath included hundreds of aftershocks and a devastating tsunami that claimed over 15,000 lives.

"It happened on March 11, and I had to finish my teaching contract in June," she remembers. Though unharmed by the earthquake itself, the pair were living less than 100 kilometers from the Fukushima Daiichi Nuclear Power Plant, where the tsunami triggered a meltdown of multiple reactors and a subsequent release of radioactive substances into the surrounding areas. "For those months, we ordered everything from the Kansai region or even further south. Even our water was shipped in." 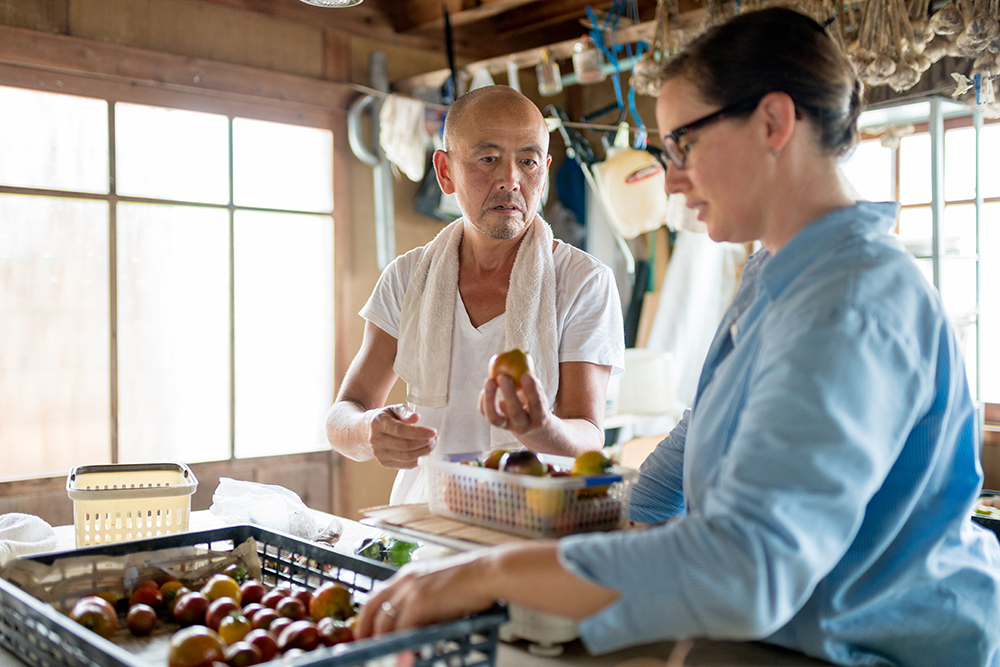 Owatari and Richardson, readying a batch of vegetables for shipment.

The disaster is ultimately what led to the creation of what is now Hello Farm Organics. "I wanted to know that I was eating healthy and safe food," Richardson explains. With no work lined up, the two evacuated south to Kyoto City, where Richardson quickly found another teaching position while Owatari searched for more farming opportunities. Soon after, they discovered Saka no Tochu, an organic produce distributor that had recently developed a farm-start initiative specifically for evacuees of the Fukushima disaster. "They wanted to relocate farmers from Tohoku to Kansai, and we qualified because Zenryu had been farming in the affected region. The program found this land, our house, the initial buyers. It was a package deal," says Richardson.

"There are not enough farmers," Owatari says. "It's a global epidemic."

Despite yearly setbacks from increasingly destructive extreme weather (flooding, heat waves, a greenhouse that collapsed under snow, to name a few), Hello Farm Organics continues to expand and develop strong relationships with its local community. Though satisfied with their small farm's growth and success, the two also recognize the larger problems facing the organic movement worldwide. "There are not enough farmers," Owatari says. "It's a global epidemic."

In an effort to share knowledge and strengthen the movement, the two have hosted dozens of WWOOF (World Wide Opportunities on Organic Farms) volunteers from across the globe. They've also hosted a number of student groups from the international grade school where Richardson continues to teach full-time during the week, while returning to the farm on weekends. "The educational component is actually pretty high up there on why we have anyone visit the farm," Richardson says. "Seed saving is kind of my thing, so with the WWOOFers, I'm always like, 'Do you want to learn about seed saving? Do you want to learn about this, about that?'" she laughs. "At every school I've been at, I've grown something with the kids. I've always been involved with education outdoors and bringing it into the class as much as possible. They just go hand in hand. We had a whole middle school come and spend the night once. We made vegan food for them. A lot of them had never touched a frog!" 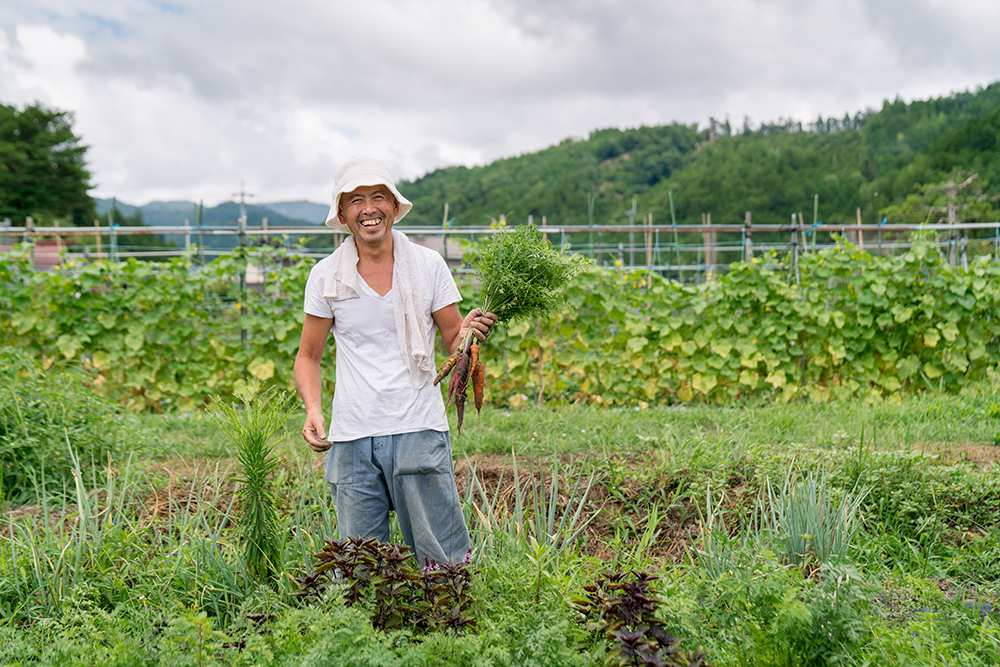 Owatari shows off a crop of freshly picked carrots in the idyllic hills of Kyoto, Japan.

As for the future of Hello Farm? "The organic movement is still about a decade behind the U.S. and Canada. It's a good time to be in Japan because the momentum is growing," Richardson says. "But I think there's more structure and organized efforts for young farmer training in Ontario, which is one of the reasons I'd like to eventually move back there," she shares. "It's a long process but I think that if you focus on building soil, you can do it anywhere. I feel like we could move to Canada tomorrow and we would just carry on."

Midori Gonzalez is a Japanese-Venezuelan American writer, assistant English teacher, and lifelong pursuer of good food. Follow her stories or get in touch on Medium @midorigonzalez and Instagram @_midoricelina.

Jonathan Galione is a Japan-based photographer, originally from the United Kingdom. With a background in television and movies, his passion for telling visual stories is what drives him to shoot. You can follow him on instagram @jgalione and see more of his work at www.shotandcapturedby.com

BACK TO STORIES
More stories in agriculture, business, education