We are Natural: California Farmers Reimagine the World through Queer Ecology

This story is based on an interview with Mo Browne (pronouns she/they) of Berkeley Basket, Edgar Xochitl (ze/zer) of Poder SF/Hummingbird Farms, and Clare Riesman (she/her) of the Center for Agroecology and Sustainable Food Systems Studies (CASFS)

"I always say farming is inherently queer," laughs Mo Browne beneath a massive flower crown. In an urban garden in Berkeley, California, Browne and fellow farmers Edgar Xochitl and Clare Riesman joyfully weave flowers together, burn sage, and share their mission to change the way we talk about science, ecology, and farming by "queering" them. When pressed for a definition of "queering", the group lovingly shakes me off. After all, queerness at its core is a celebration of the undefined.

They have bonded together as an unstoppable queer farmer triad with their eyes on a bold future: a world that affirms all life.

As the fog lifts, Browne offers, "Farming is inherently queer because we work with nature, and nature has shown us that gender is a spectrum - in our bodies and in our spirits - just as there are many different gender variations in plants." The group nods, and Browne continues, "Most First Nations people knew this. With colonialism, with gender binary-ism, and with all of those -isms, that wisdom was suppressed." 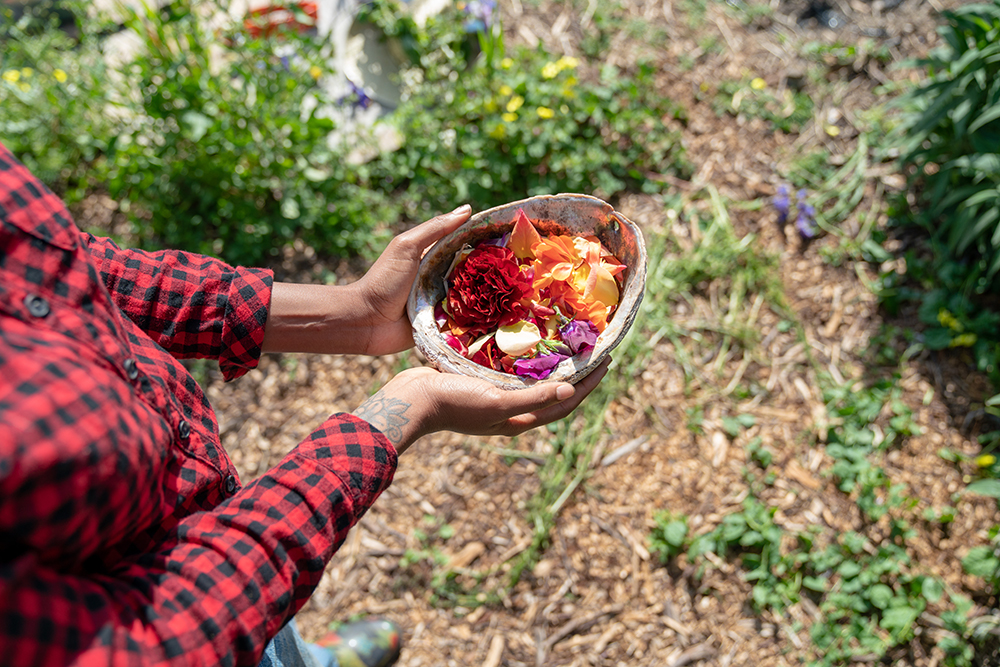 Mo Browne holds an offering of flower petals at one of Berkeley Basket's backyard urban farms in Berkeley, California.

As apprentices in sustainable agriculture at the Center for Agroecology and Sustainable Food System Studies (CASFS), the three together started questioning not just the way agriculture was being taught, but ecology - the basis of sustainable farming - as well. While CASFS has long been an agricultural bastion of free-thinking, Xochitl reflects, "The curriculum kept reinforcing hetero-patriarchal science." In response, they helped make an event called Queer Farmer Field Day into an annual staple. Quickly, they realized that the concepts they were exploring had deeper, systemic implications and the potential for profound change, and have since bonded together as an unstoppable queer farmer triad with their eyes on a bold future: a world that affirms all life.

There are solutions out there that we haven't thought about. And that's because the same people keep looking at the problems from the same place.

As sustainable farmers, they already reimagine agriculture through the lens of the food movement. But by incorporating queer ecology, they began to reimagine a broader transformation as well, one that challenges harmful, socially-constructed narratives and stereotypes in order to promote healing in all relationships, identity, and community as well as agriculture. Queer people have long questioned deeply-engrained social norms like heteronormativity and gender norms. That makes them uniquely poised to reimagine and expand our whole world, liberating constraints on solutions at a time when our future depends on thinking beyond the frameworks that caused our current agricultural and environmental crisis.

Xochitl nods, "By queering ecology, people can start thinking outside conventional ideas of science [for] solutions to things like today's climate chaos. There are solutions out there that we haven't thought about. And that's because the same people keep looking at the problems from the same place." 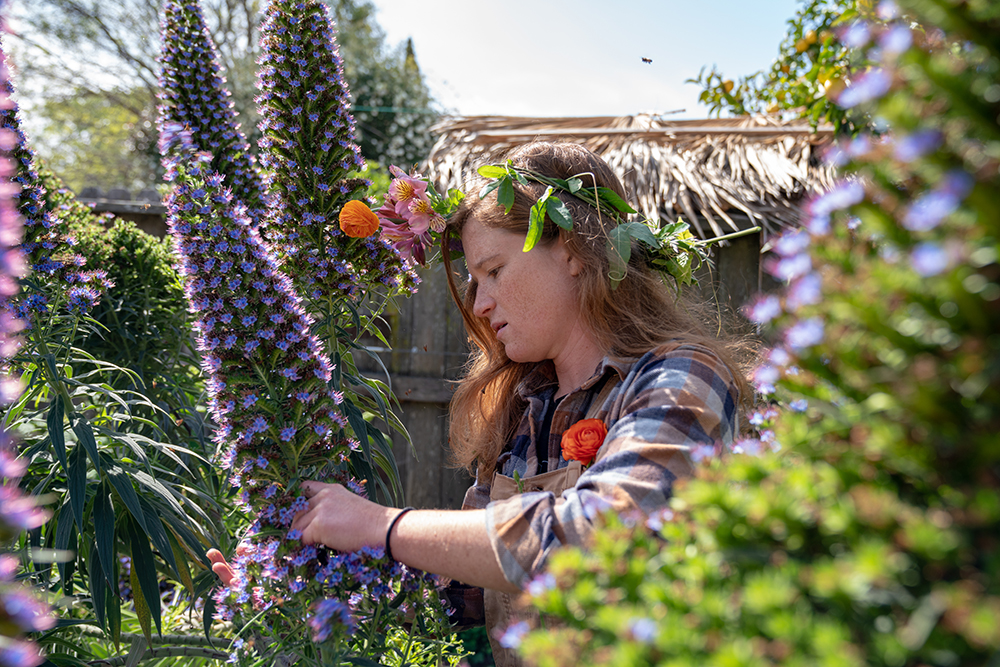 Clare Riesman communes with a flowering echium plant, while sharing what it would be like to live in a world that affirms all bodies and all lives.

These concepts are gaining visibility through films like Out Here and the work of academics like Dr. Catriona Sandilands. And the conversation is growing. Over the last few years, Browne, Xochitl, and Riesman have been invited to present lectures, give interviews, and help incorporate queer concepts into farm education curricula. They also lead workshops at Ecofarm, the West's oldest, largest conference for organic farmers - workshops that are hard-hitting yet intimate. A workshop description reads, "Mainstream understandings of botany and ecology have been used to justify violence against queer, trans, indigenous, and people of color; female, disabled, and marginalized bodies. The field of queer ecology seeks to reimagine the natural world in a way that values and affirms all life." Riesman explains further, saying the workshops encourage participants to ask, "What is natural? What language and stories are we using? [Why] do we reinforce the idea that there are only two sexes, that they are unchangeable, and that it is the ideal that these two sexes come together to reproduce?"

Language has a way of taking the form of the people in charge of the narrative. By starting with language, they can also question the way scientific truths are created and canonized. 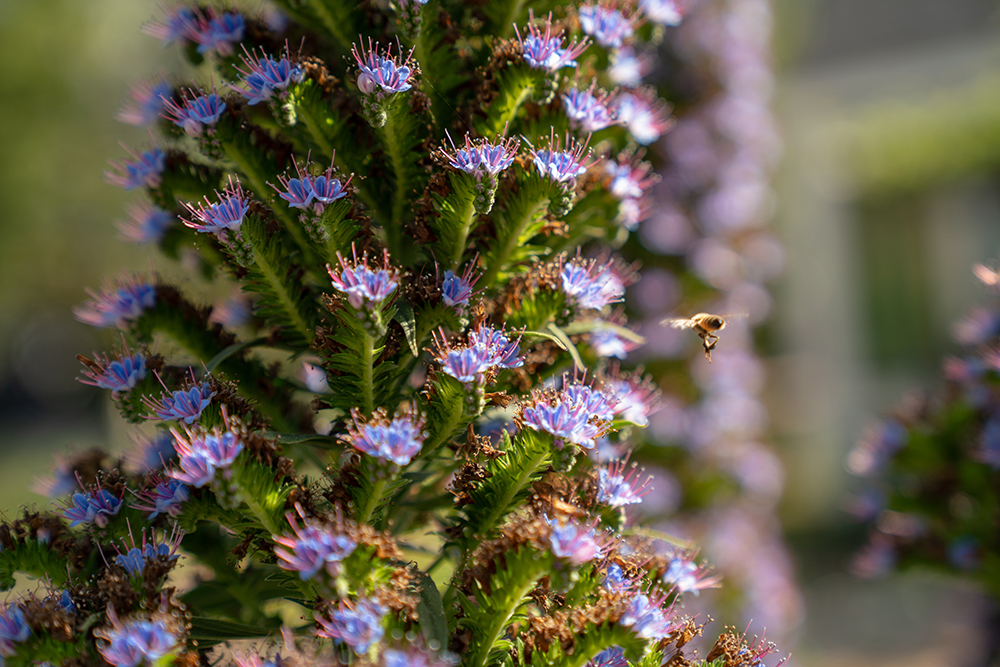 A closeup of the echium flower with a honeybee. "Nature has shown us that gender is a spectrum - in our bodies and in our spirits - just as there are many different gender variations in plants," says Browne.

Rarely is scientific language, particularly in early education, submitted to this type of query. Yet, this is when many of us are taught what is "natural" - especially around gender, reproduction, and even plant anatomy. For example, in order to have a "complete" flower, we were likely told there must be a male and a female part, rather than using the more accurate terms pollen-producing and pollen-receiving. By linking biological essentialism of plants to humans, says Dr. Sandilands, queers have been "seen increasingly as against nature." This is not unimportant, since what is perceived as natural can dictate what and who has a right to exist in the world.

Reflects Riesman, "I would think as a kid, 'Whatever I'm learning in this class is true, and therefore I'm wrong because I'm still waiting to be attracted to an opposite-sex person.' It was easier to integrate the fact that I was unnatural."

Xochitl nods, "Right, when something is labeled 'science,' it becomes something others can't question. And that can be dangerous. As queer folks, we've been kept out of a lot of scientific discussions. Queer ecology instead centers us in the understanding of nature. We aren't saying we're anti-science. Far from it. We need it to understand microbes and pollination and pruning effects. But how can we start deconstructing the language and [leave behind] the stuff we don't need?"

When something is labeled 'science,' it becomes something others can't question. And that can be dangerous.

While deconstructing language may seem painstaking, the stakes are high when language deems certain people "unnatural."

Riesman sighs, "This is still a life and death issue-people are being killed. Violence is being inflicted on people's bodies for their gender expression and sexual orientation. There are much higher rates of mental illness among trans and queer people. As long as the predominant understanding of what is natural involves being cisgendered, heterosexual, and able to produce a baby there is still material impact on the lives of people who in any way deviate from those norms."

After a long silence, Browne exhales sadly, reflecting on the larger state of the world's environmental and climate crises: "How is someone supposed to show up for this movement if they don't feel safe?" 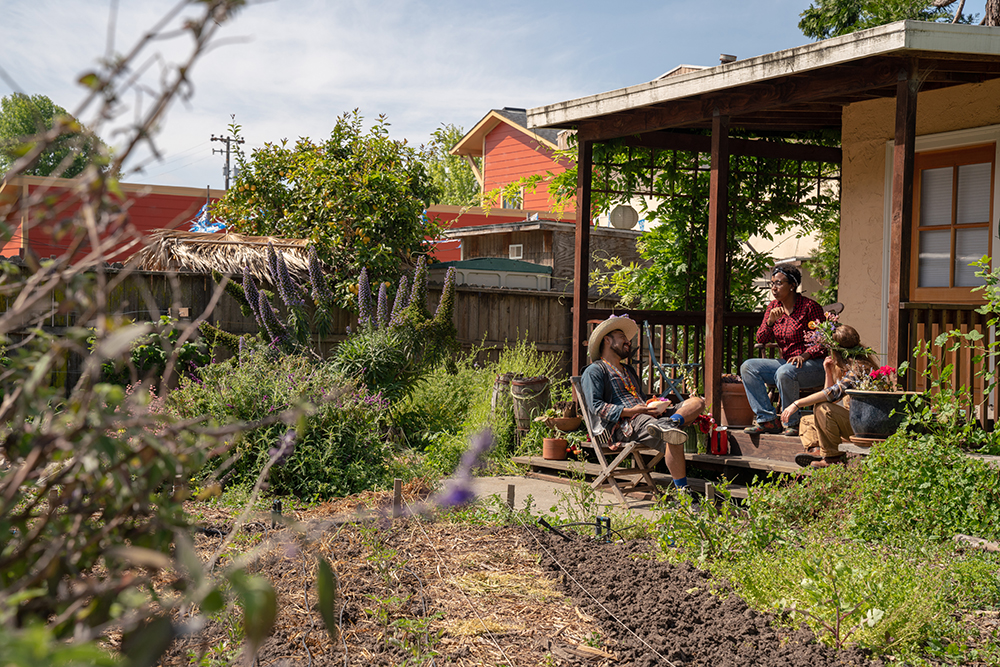 (left to right) Xochitl, Browne and Riesman on the porch at one of Berkeley Basket's backyard urban farms.

A just transition to sustainable agriculture and climate resilience must involve embracing, encouraging, and turning to queer people to deconstruct old ways, and reimagine new ones. Queer people and the act of queering can guide all of us towards a world - and an agriculture - that affirms all life.

With that in mind, there is power in queer ecology's role in shaping future generations, says Xochitl: "It needs to be part of how we describe natural sciences, particularly so youth can create their own relationship with nature, based on how they, within gender fluidity, are truly an expression that exists in nature and spend energy instead on creating solutions. We're not imposters - we are part of nature. We are natural."

As the garden fills with light and the sun warms our backs, Riesman concludes, "Let's teach our young people that they are part of this world, and that they are beautiful."

Katie Brimm is a freelance writer based in Sebastopol, CA. She ran an international, solidarity travel program bringing people to the frontlines of the global Food Sovereignty movement and has now worked for over a decade in the international and local food movement in various roles including writer, activist, nonprofit educator and storyteller. She is passionate about resilience, justice and joy. Katie finds balance by getting her hands dirty as a no-till farmer at Singing Frogs Farm where she co-founded a Flower CSA. You can find her on Instagram @katiebrimm or at mesaprogram.org/about/leadership.

Michael A. Estrada is a first generation Salvadoran-American photojournalist and artist. His work falls at the intersection of media, environmental justice, art, and the representation of BIPOC in nature. Between travels, he drinks a fair amount of boba and bikes/swims/runs as much as possible under the sun. Learn more at aemichael.com.

BACK TO STORIES
More stories in agriculture, education, other