Kuulei Santos and the Salt Makers of Hanapepe

Nearly every summer since she was a child, Kuulei Santos stands in the mud in the same place her grandmother did, when she was a child. That place is the Hanapepe salt patch on the west side of the island of Kauai. Located on one of the lowest points near Salt Pond Beach, with an airstrip on one side and a plantation on the other, the Hanapepe salt patch is a brick-red square of earth peppered with oblong pools of shimmering sea water, crystalizing in beds of rich, black clay.

Santos' is one of twenty-two families in the hui - a group of salt makers that spans generations and hundreds of years - who are devoted to the practice of pa'akai, the Hawaiian word for the act of making salt, which means "to solidify the sea."

"We use the same beds that my grandmother used. I started when I was a little kid and my kids have been going since they were babies; they've never missed a year," says Santos.

It's tradition to only give away the salt or trade it for other goods.

This tradition is unique, not only because of how it's done, but because Santos and the members of the hui make no profit from the salt's creation. In fact, it's tradition to only give away the salt or trade it for other goods. 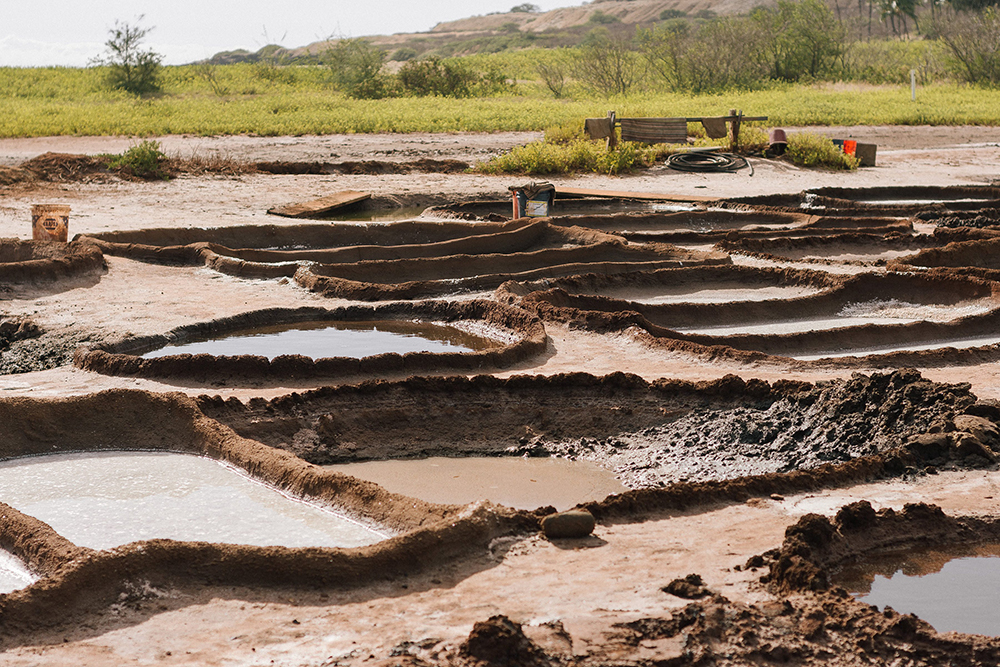 The salt flats of Hanapepe

That means, according to Santos, that Hawaiian salt purchased in stores and at craft markets on the islands and elsewhere often isn't real Hawaiian salt.

"They make it in Arizona, package it in Hawaii, and put 'Hawaiian salt' on it; it's just one of those things that happens," she explains.

It's a slight, because making salt isn't without obstacles. Everything from weather to human interaction threaten this age-old tradition, making someone like Santos vital to the future of the practice and location.

"I tell people we're a dying breed," Santos says without any trace of exaggeration.

The process of turning sea water into salt without mechanical intervention is a slow, laborious one. Much like farming, there is a season for salt. Because the Hanapepe salt beds are low-lying, the land spends most of the winter under water. The season begins when the water dries up, revealing the decades-old beds. 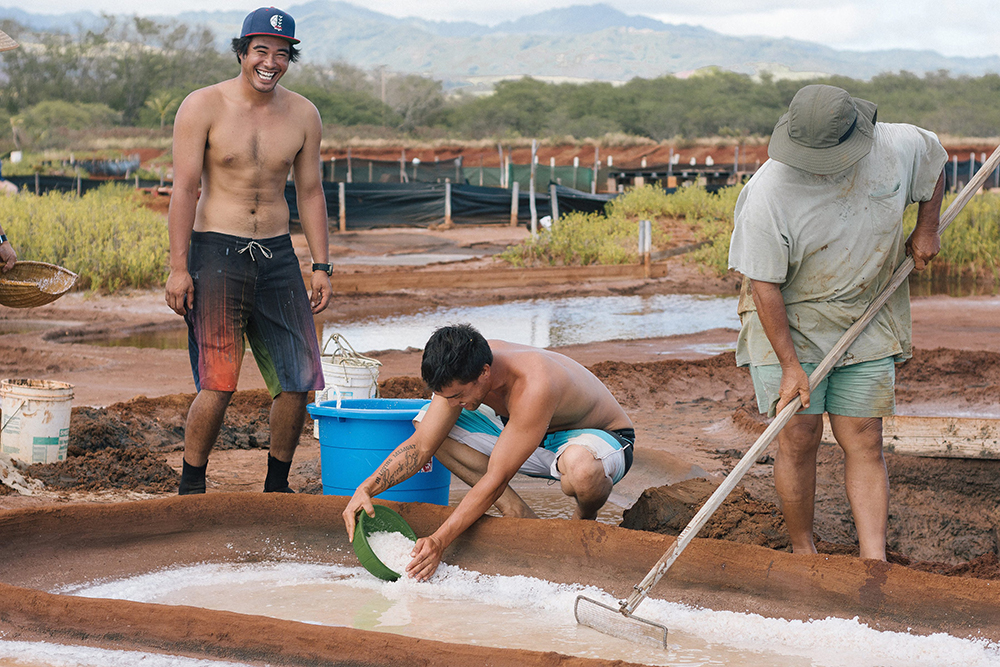 Above: Members of the Hanapepe 'hui' agitate their salt beds, raking and harvesting the finished salt. 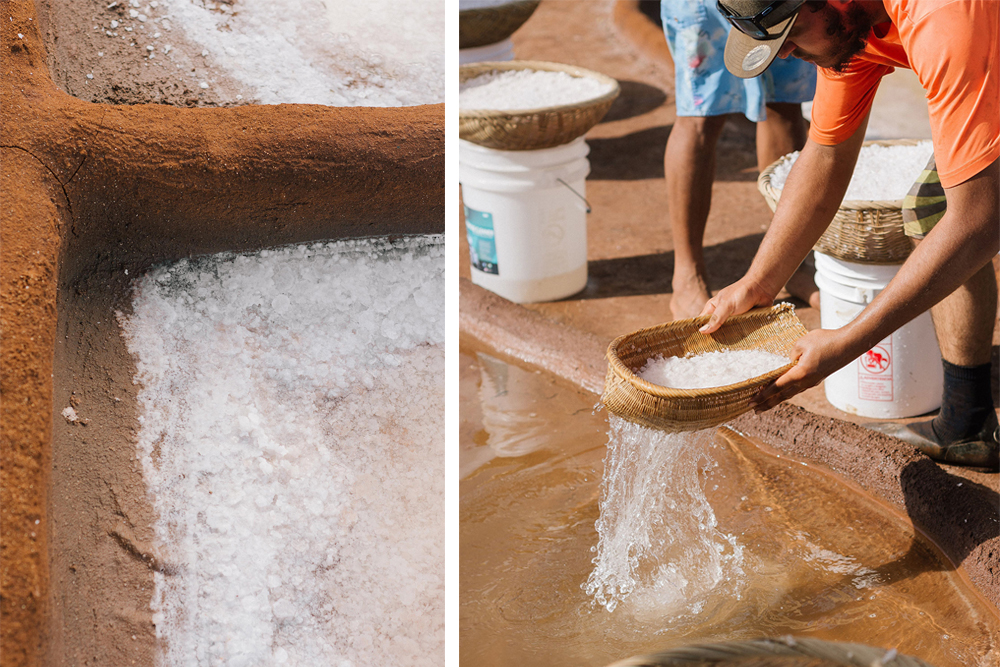 Above Left: As seawater evaporates it leaves layers of salt crystals behind. Above Right: Rinsing the salt in a clean bed before setting it to drain.

Water flows in from the ocean via underground lava tubes and into wells. Each season, members of the hui jump into the wells and scrub out mud and debris that has collected during the rainy season, allowing clean water to enter. The presence of tiny, red brine shrimp in the wells signal that the water is good and salty.

Santos and the other families in the hui then turn their attention to the beds, cleaning them in a similar manner, and collecting gooey, black mud to create a barrier for the water to evaporate. As the mud hardens it must create a completely smooth, hard surface; if there are any cracks, the bed must be redone.

Once the beds are ready and the wells have naturally filled, water from a well is transferred to a holding bed called a waiku to heat. Once warm, the water is transferred again, this time to the shallow beds to evaporate, leaving layers of crystals behind.

My father used to give away five-gallon buckets, and you're lucky if you get a sandwich bag now.

Every few days the beds are stirred, water added as needed. Three distinct layers form when the water evaporates: the top layer, the whitest, is generally used as table salt; the middle layer is slightly pink and is used for cooking, while the bottom layer is a deep red or brown and is given to fisherman or used in blessings. The finished salt is quite different than regular table salt - or even kosher salt. It's sweeter and has a distinctive crunch. Some people snack on the white top layer.

This process is repeated as often as possible throughout the summer, ending when the first big storms hit and the land once again becomes too soggy. 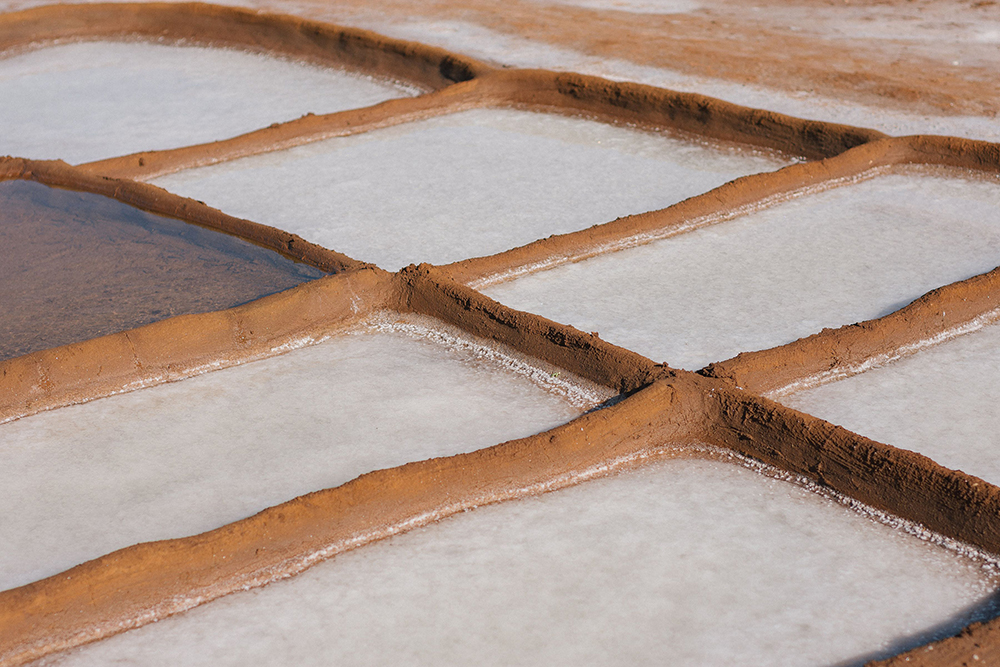 Salt beds in various states of evaporation - the top, whitest layer of salt would be used for table salt.

Over the years, the seasons have become shorter, and the harvests have gotten smaller and smaller. Some years there is no salt at all.

The land where the salt beds sit is owned by the county. In the early 2000s, the county backfilled some asphalt between the ocean and the salt patch, blocking drainage.

As a result, Santos says, "The water didn't flow as good as it used to and we weren't able to make salt for two years."

The nearby Salt Pond Beach also poses problems, as people drive on the sand, taking a little bit with them each time. This has severely eroded dunes that used to protect the salt patch from ocean waters, causing flooding to happen earlier and earlier each season. Beachgoers also party in the parking lot and on the beach, often leaving behind debris and broken glass. Nearly everyone in the hui has gotten cut from trash and glass. The whirring blades of aggressively promoted helicopter tours also blow grit into the pools.

"I tell people they're not salt-worthy now. My father used to give away five-gallon buckets, and you're lucky if you get a sandwich bag now. It's like, are you salt worthy? It's funny, but it's not funny," she says. 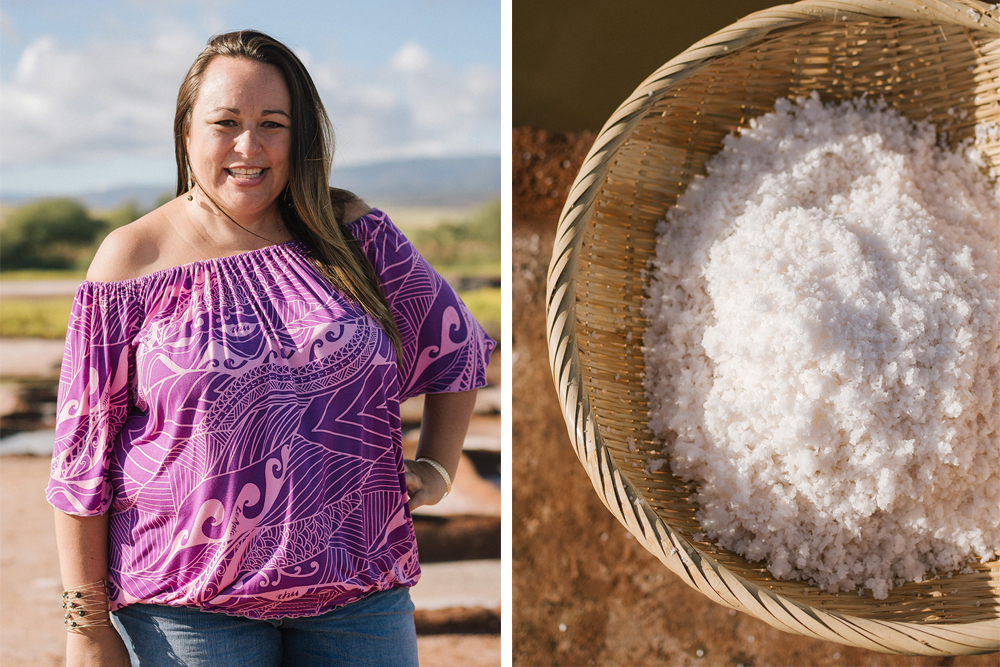 Above left: Kuulei at the salt patch. Above right: A basket filled with finished salt crystals.

For years the hui bore the brunt of these obstacles silently. Santos says her father's generation was content to grumble amongst themselves but, ultimately, just kept doing the work.

Santos battled within the hui for six years to get permission to speak out at city council meetings and within the state and county government in the hopes of getting protections for the patch.

"I still battle. And even though the salt makers have joined forces and we all hold hands, no one is brave enough to stand on the front lines. My dad won't stand there with me, but he stands behind me. It's hard, it's complicated, but I know if I don't do it, my kids and their kids won't be able to continue." 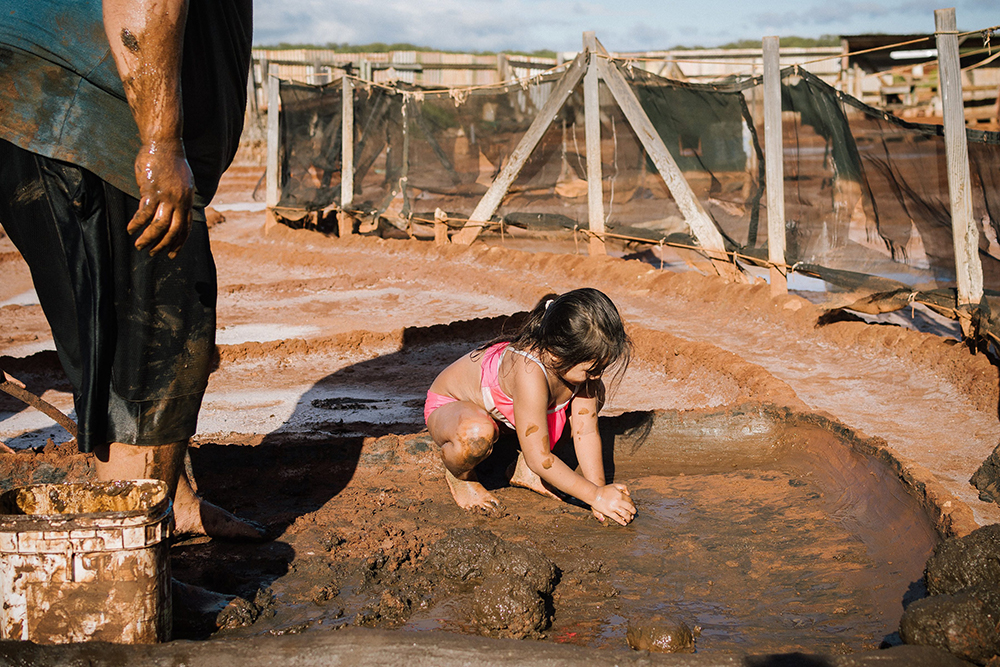 One of the youngest members of the 'hui' spreading mud to line her very own salt bed.

Santos knew she wanted to fight the moment she had her first baby, a daughter who is now twenty-five years old. Despite some moments of resistance when she herself was a teenager, she says her kids have never missed a season.

"As soon as I had a baby, I knew this was important, and I wanted them to share a piece of this as a family. We all get together - me, my parents, my brother, all his kids, my cousins - we all get to spend a day together doing something that our grandmother did as a little child."

It's hard, it's complicated, but I know if I don't do it, my kids and their kids won't be able to continue.

She battles for them, saying that her goal before she passes is to kick out the helicopter company. She's made strides within the local government - a delicate relationship that is threatened every time there is an election and new officials take office. Still, the importance of the tradition along with her children are her motivation.

"And I hope my kids take over my passion - if I had a legacy, I would want it to be that. Gather all the area around, put it to the salt makers, and be the keepers of not only the salt area, but the area that protects the salt area. That's the goal, that's the battle, and I have a long way to go to make sure that happens."

Jackie Varriano is a Seattle-based writer who loves digging into stories that discuss why we eat the things we do - and when. Her work can be found at jackievarriano.com.

Mallory Francks is a photographer based on Kaua'i Island in Hawai'i. Her work brings her all over the planet documenting love stories, landscapes, and life as it's lived in other corners of the world. www.malloryfrancksphotography.com, @malf_photog

BACK TO STORIES
More stories in agriculture, culinary

The Druze Tradition is Alive at the Table in One Woman’s NYC Restaurants
Bridget Shirvell May 28, 2019