In the heart of Manhattan's Upper West Side, on Amsterdam Avenue between 82nd and 81st Streets, Gazala's transports its diners to a world far removed from the hustle and bustle. It's the type of place you don't find very often in this city. A gold tray ceiling adds a bit of coziness to the spacious restaurant. Rustic wooden tables beckon diners to settle in and stay awhile. Mosaic tiles frame the open kitchen where delicious smells waft about as Chef Gazala Halabi dishes up her Druze family recipes, recreated for a New York audience.

I felt it would be a good idea to share with the American people my culture through food, Halabi says.

Growing up in Daliyat al-Karmel, Israel, Halabi spent her childhood immersed in the world of  food and hospitality, not only at her family's restaurant and spice shop but also as a member of the Israeli Druze, an ethno-religious group  known for their affability. Yet opening and operating two restaurants of her own in the United States was far from anything she could have imagined as a child.

"When I married and  I came here to the United States, I struggled a lot in the beginning with the language, and with the culture, but with time, as I tried to fit in, I felt it would be a good idea to share with the American people my culture through food," Halabi says. 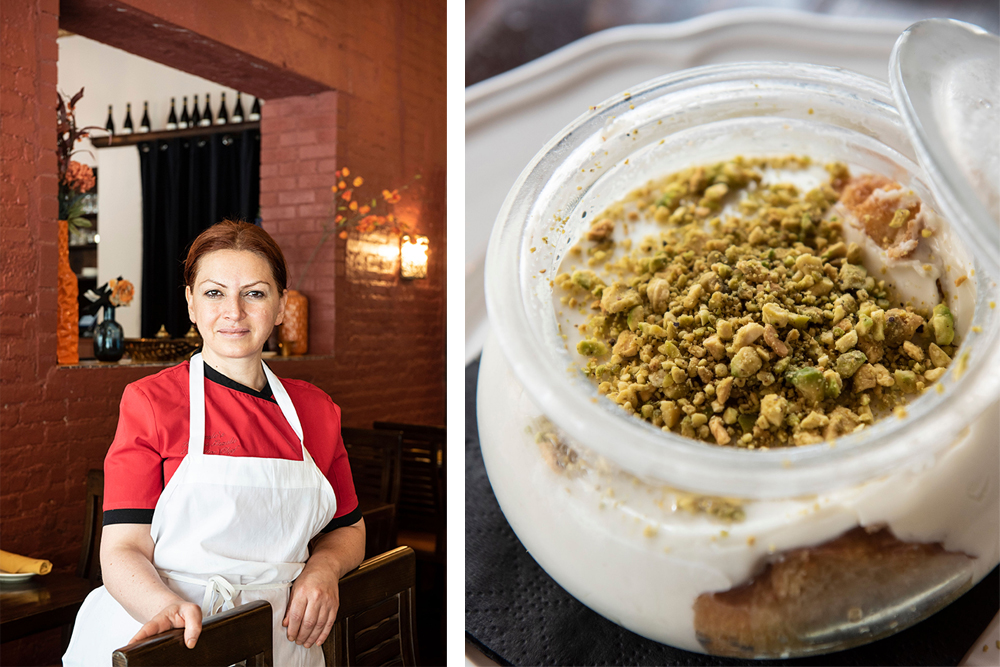 Gazala Halabi in the dining room of her namesake restaurant in New York City's Upper West Side, and her Osh Al-Saria dessert, a favorite among diners

In 2007, at the age of 27, Halabi opened what's now known as the 9th Avenue or original Gazala's Place, a snug little restaurant in the Hell's Kitchen neighborhood. With only a handful of tables and no liquor license, it caters mostly to the weekday lunch crowd. It's not uncommon to find a line of people checking out the freshly made bourekas whose comforting smell of baked dough often causes people to stop and give the unassuming spot a second look. 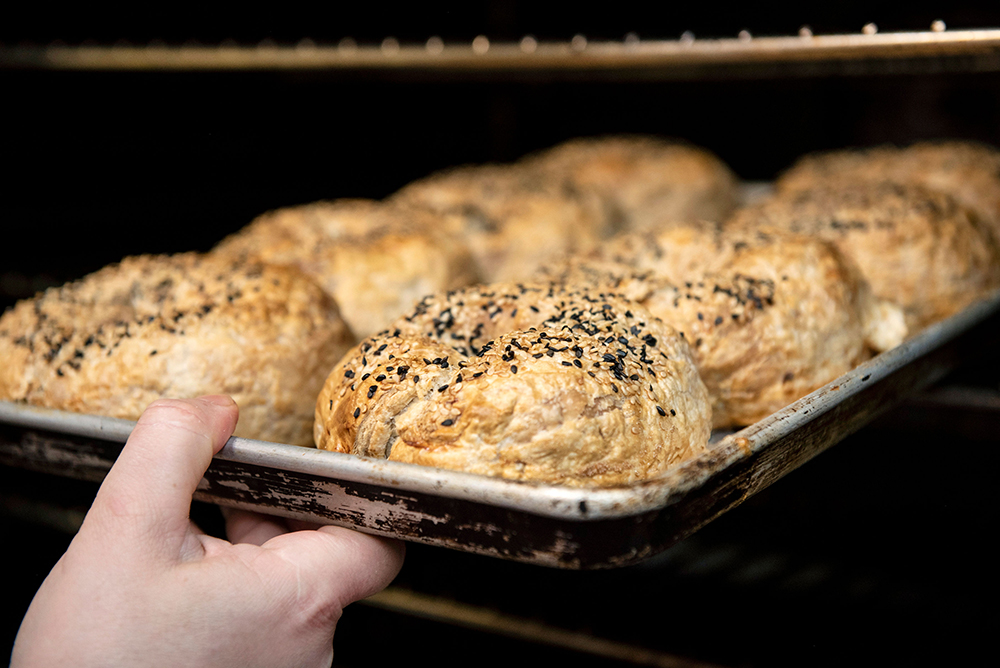 While no formal record exists, it's believed that Halabi's restaurants are the only ones in the United States serving Israeli Druze cuisine, which is known for spreads like labane (a homemade goat cheese with olive oil and Zaatar) baba ganoush and hummus; salads and kebabs and dishes with lots of fresh herbs and spices. The Druze faith incorporates elements of Islam, Hinduism and Greek philosophy, and dates to the 11th Century. While there are believed to be about a million people around the world who identify as Druze, marriage across religious lines is still rare, and most live in Israel, Syria, Lebanon and Jordan.

"The feedback from customers gives me a lot of energy. When people just walk to the kitchen and talk about how they love the food. It makes me want to keep doing it and I wasn't scared anymore, I just go ahead and try to do even better every single day," Halabi says. 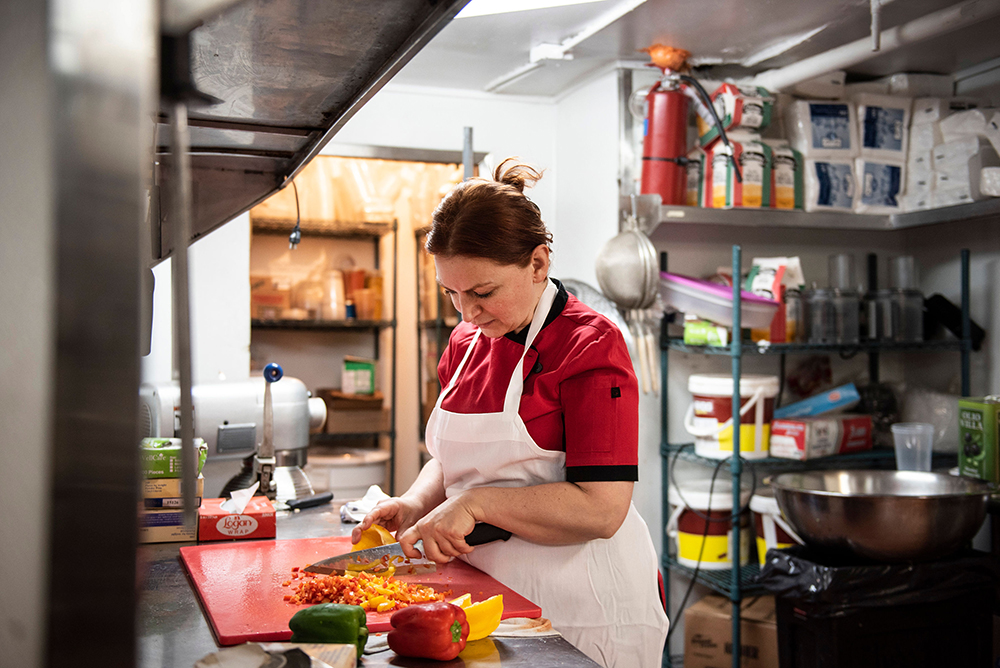 Halabi preps vegetables in the kitchen of her restaurant

She prepares all her dishes from scratch using recipes handed down from generations as well as some she recreated from the memories of watching her relatives in the kitchen.

"They are Druze recipes but I've fixed them a little for New Yorkers," Halabi says. "I minimize the salts, or in the cookies, there's supposed to be a lot of rose water but I minimized it so you can barely taste it. Everything I serve is one hundred percent my taste, though."

Everything I serve is one hundred percent my taste, though.

For those unfamiliar with Druze cuisine, Halabi says it's the Branzino, a Mediterranean sea bass that comes lightly fried and topped with a sauce of herbs and spices, and the labanie (meatballs served with a yogurt sauce), that bear the Druze signature. 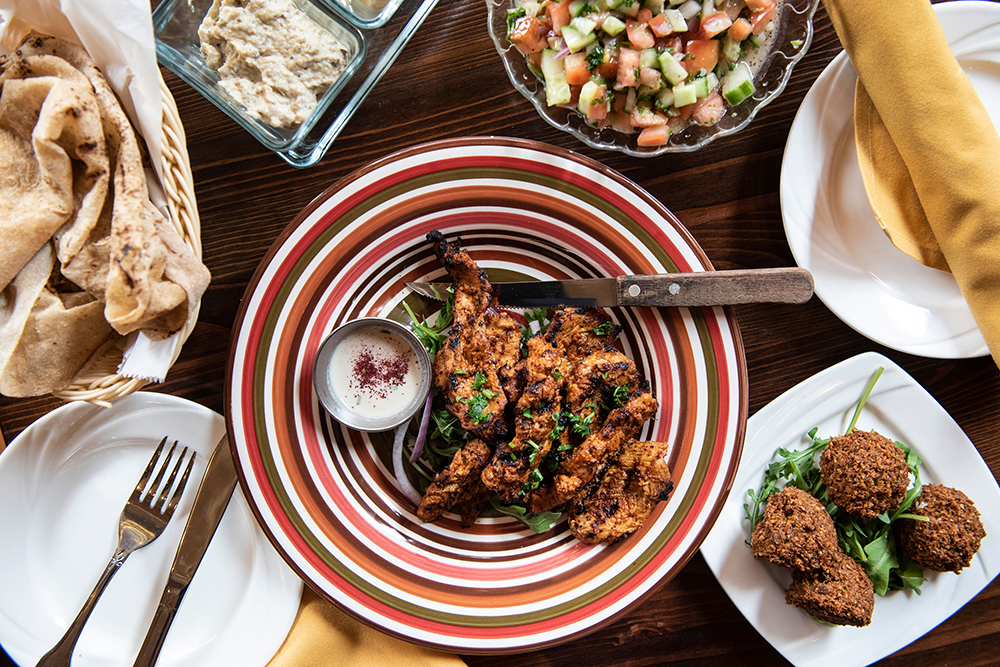 A spread from the lunch menu at Gazala's, which serves Druze food with a distinctly New York style

While many of the dishes appear simple at first glance, it's in the execution that both the food and Halabi's commitment to hospitality shine. Each bite of her Osh Al-Saria is creamy and lively with hints of citrus and rosewater. A very light dough topped with yogurt pudding and pistachios, it's the type of dessert that is easy to overlook on a menu, but within each spoonful there's a welcoming, familiar taste, as if you've stepped into your best friend's kitchen and are readying for a chat.

Halabi created the recipe from the recollection of a similar dish her grandmother made when she was a child. "I made it for her once when I was visiting, and she was said, How'd you do that," Halabi says with a smile. It's the most popular dessert on the menu at each of her restaurant locations, bookending a dining experience that honors Halabi's past while keeping her firmly rooted in the present. 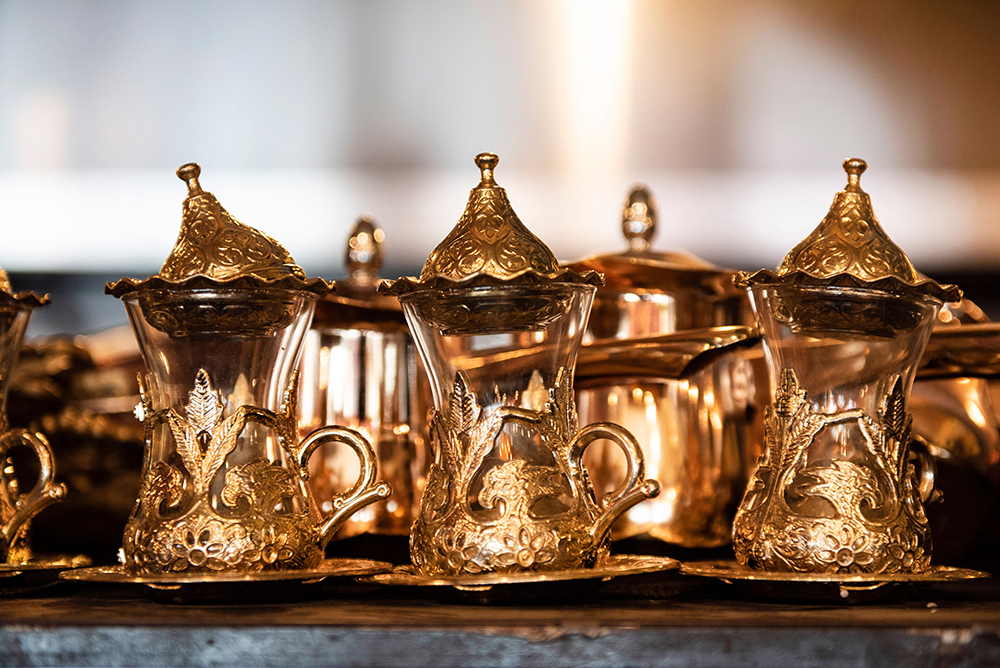 Teacups ready for service at Gazala's

She now spends most of her days at the Upper West Side location, which opened in the summer of 2018. While both restaurants feature the dishes she's become known for - the spreads, bourekas and desserts - the larger kitchen at the Amsterdam Avenue location has allowed her to expand the menu. And while the second location means longer hours - they do a brunch with a Druze breakfast special of eggs, Akwai cheese, olives, pickles, and hummus - she manages it, along with mothering two teenage children, in part because she lives practically across the street.

"Time goes by so fast," Halabi says. "We have no family here, everyone is in Israel. I didn't think I'd be here but for a short amount of time and I still don't see myself growing old here."

For now she's concentrating on the restaurant and continuing to share her culture and a sense of home with everyone who walks in the door, asking with a warm smile that holds a hint of a secret, "Can I get you something to eat? What can I make for you?" to the couple that's just walked inside.

Bridget Shirvell is a freelance writer covering food, travel and sustainability. Her work has appeared in Martha Stewart Living, Civil Eats, PBS NewsHour and more. Connect with her on Instagram or Twitter @breeshirvell.

Liz Clayman is a native Mainer, and longtime Brooklynite. A freelance photographer specializing in the culinary and hospitality industry, she is also the Photo Editor at Edible Manhattan and Edible Brooklyn magazines. www.lizclayman.com