Finding Herself at Home: Rochelle Karolus and Wolfgat Restaurant

On a Wednesday in May, toward the end of lunch service at Wolfgat Restaurant, Rochelle Karolus bent over a wood countertop in the back kitchen, writing each table's bill out by hand. Karolus, who goes by Chelle (pronounced Sel or Sal in the local Afrikaans accent), has done this for Wolfgat's chef-patron Kobus van der Merwe for the past nine years. These handwritten bills are one of many singular touches at Wolfgat, the South African establishment named 'restaurant of the year' by the World Restaurant Awards in February. Karolus is, as van der Merwe describes her, "the head and heart of our kitchen, and mother of the family."

Two hours drive from Cape Town in the town of Paternoster, Wolfgat is housed in a historic fisherman's cottage perched above the dunes of a long beach. Each morning, Karolus walks the ten minutes to work from her childhood home, which she currently shares with her mother and young son. She often arrives at Wolfgat early, to make bread and get ahead on prep. The vantage from the restaurant is idyllic. Small wooden boats move in and out of the crescent-shaped bay or are pulled up over the sand. One of the oldest fishing settlements on South Africa's West Coast, every building in Paternoster is whitewashed, with brightly-painted blue or red shutters reminiscent of postcards of Greece.

For a woman of color without a culinary school education, she has a rare level of responsibility.

Karolus heads a team of four, rarely misses a service, and typically works two double shifts a week. It is her responsibility to make sure the operation runs smoothly at Wolfgat, where there is no hierarchy of roles, nor distinction between front and back of house. Executing Wolfgat's uncontrived, naturalistic style alongside van der Merwe, she is, for all intents and purposes, an excellent Sous Chef as well as Front of House Manager. For a woman of color without a culinary school education, she has a rare level of responsibility - the fine-dining industry in South Africa is comprised, at the top, almost exclusively of white men. 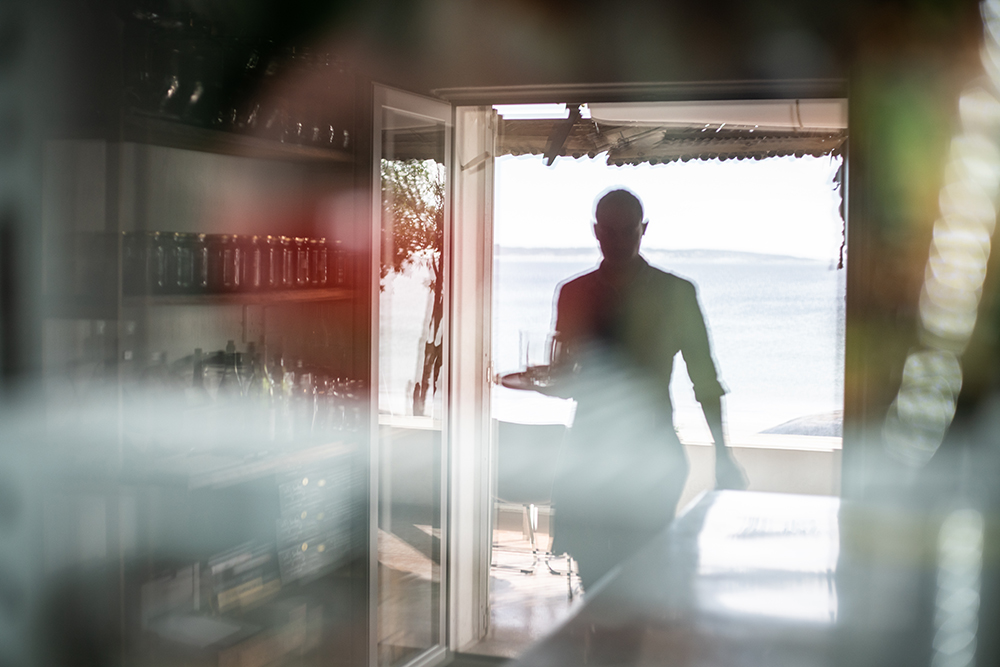 A waiter tends to patrons at the seaside Wolfgat Restaurant.

When Karolus began working with van der Merwe in 2010, first in the scullery and then as a waitress, he had just moved from Cape Town to Paternoster to run a small garden bistro a few blocks from where Wolfgat is now located. Karolus considered the job short-term, convenient in that it was close to home; her plan was to save for a computer course that would improve her job prospects. But when she had her son in 2012, she says she, "Forgot all about the CV and kept on working," focusing on supporting her family. "And I don't have any regrets."

To reach her senior position at what is now an international dining destination, Karolus had to master not only the necessary culinary and service skills, but also to relearn the landscape of her home in Paternoster. Wolfgat is what van der Merwe calls a 'Strandveld eatery,' a term he coined to reflect his exploration of the heritage and ecology of Paternoster's unique landscape. Strandveld, which translates to beach scrub, is the term for the area's endangered vegetation type. The restaurant's tasting menu is hyper-local and hyper-seasonal, focused on underutilized ingredients from the surrounding sea and veld: samphire, klipkombers, veldkool, limpet. Though Karolus's family roots in the area predate European colonization, much of what van der Merwe was foraging was new to her. 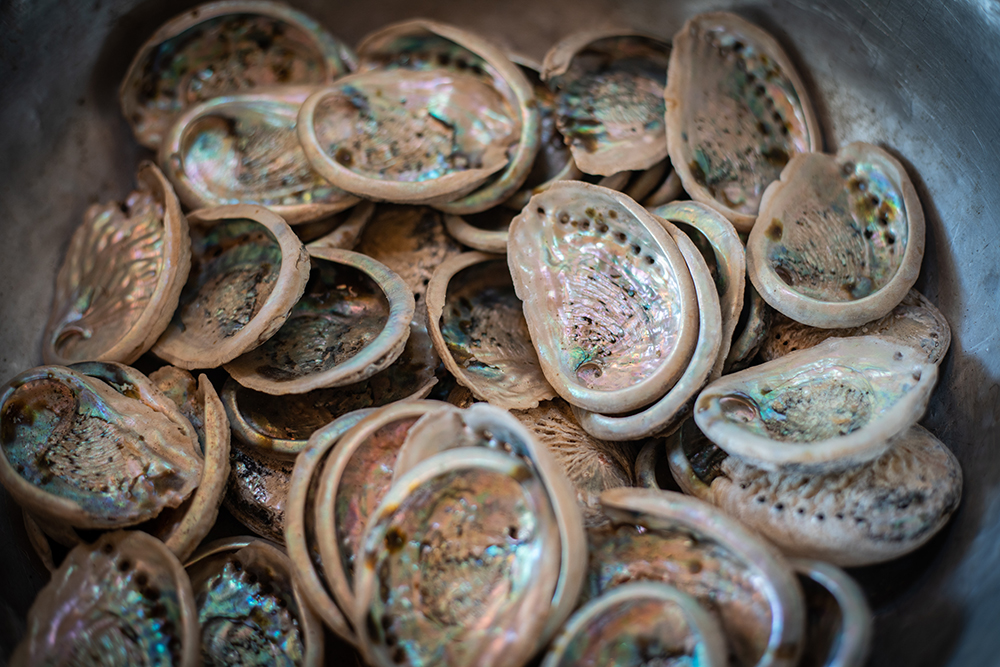 A bowl of decorative abalone shells reflects the colors of the water outside.

Some things Karolus recognised, like soutslaai, a luscious succulent indigenous to the Strandveld and now popular in fine-dining restaurants across Europe. As a child, she had played with the fleshy leaves, pretending they were lamb chops needing seasoning. But Karolus says she didn't know it was actually edible, and at first she was reluctant to try it. She remembers feeling incredulous: "This guy"-who wasn't even from the area-"showing us in Paternoster that you don't just have to make a living to eat, or just have to eat out of the sea. You can actually live from the dunes." 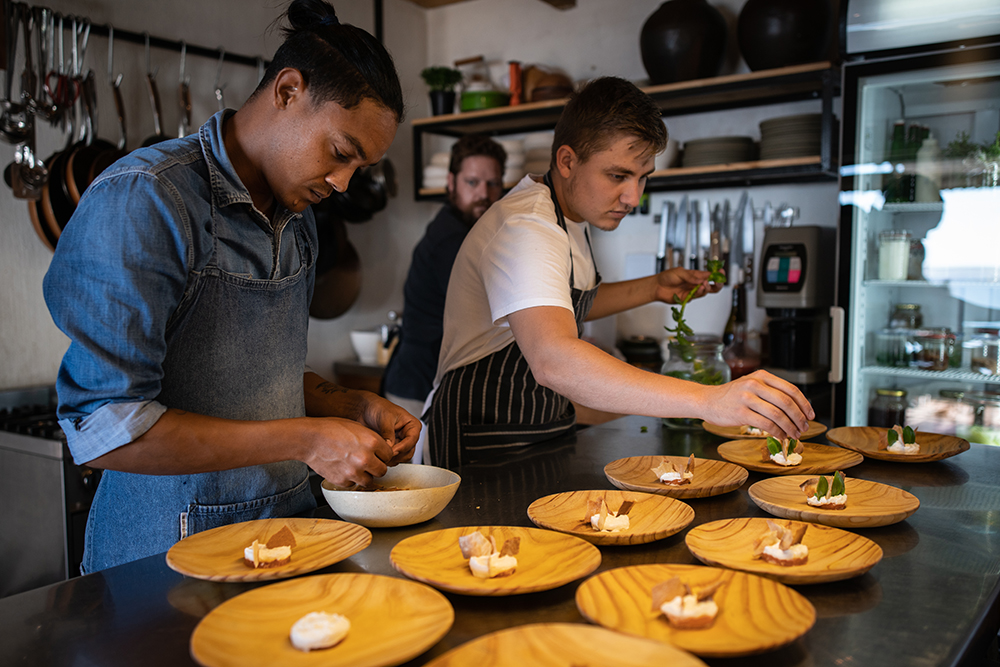 Now, nine years after an introduction to van der Merwe's methods, Karolus forages for the restaurant every week. She has come to love Strandveld food and the subtlety of how different elements combined "together on a plate makes it so amazingly tasty." But her family and most of the fishing community in Paternoster have little interest in eating what grows in the veld. Instead, the community commutes ten miles to the nearest town, purchasing food from an array of multinational supermarkets and a Kentucky Fried Chicken outlet.

In post-apartheid South Africa, the work of white-supremacist legislation has been continued by market forces.

This dynamic belies the complexity of post-apartheid South Africa, where the work of white-supremacist legislation has been continued by market forces. In Paternoster, as fishing became less lucrative and legislation around small-scale fishing rights grew more complex in the early 2000s, the economic focus of the town shifted to tourism. The fisherman's village aesthetic, considered Paternoster's main attraction, is preserved by an official town building code, but the fishing community remains largely excluded from the benefits of development. Unemployment is high. In summer, scores of young men out of work stand at busy roadsides, hawking illegally-caught  crayfish to tourists. The holiday homes and guesthouses stacked up along the beachfront have pushed fishing families into low-value housing at the margins of town. In this context, the nutrition transition-where traditional diets are supplanted by an aspirational Western diet high in fat, salt and sugar-has burdened many in Paternoster's fishing community with diet-related disease. 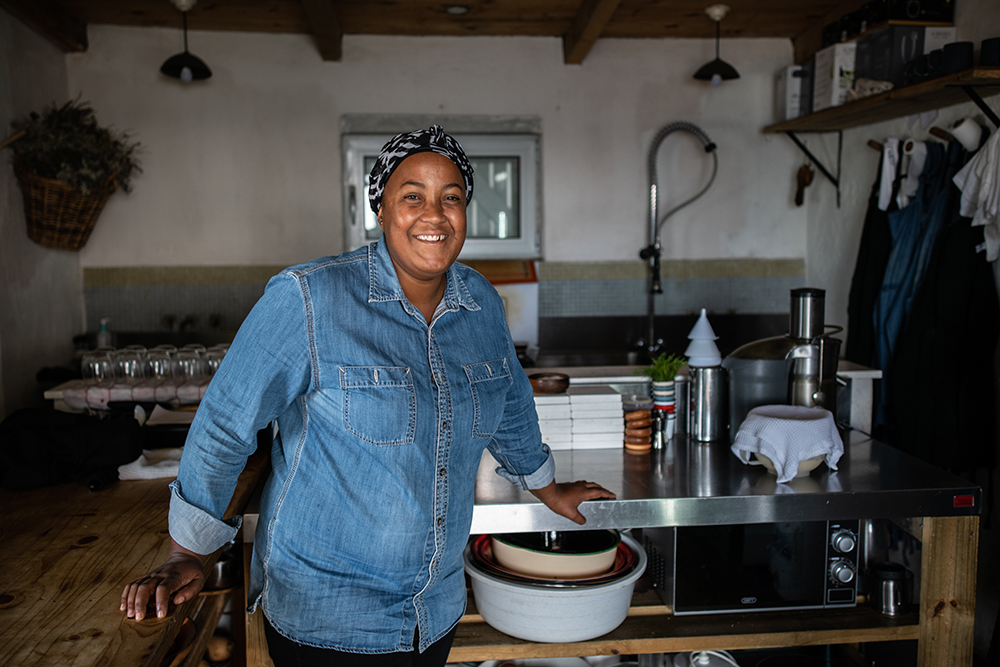 Rochelle Karolus poses for a portrait in Wolfgat's back kitchen, where it's her responsibility to ensure the operation runs smoothly.

Karolus tells me, without hesitation, that she prefers Paternoster to any other place. "I am honored to live here," she says. "Where everybody knows and cares about each other-where it's still safe to walk at night." Exceeding her expectations, she has found herself in a position that allows her to work close to home and support her family. Sitting on the beach after Wednesday's lunch service, she remarks, "I love what I'm doing now." On whether she will still be working with van der Merwe at Wolfgat in another nine years, she says she doesn't know. Smiling, she adds, "Maybe [van der Merwe] decides to get another restaurant. And I'll be owning this one. We don't know. A girl can dream."

Shaun Swingler is a photojournalist and filmmaker based in South Africa. His work has appeared in The Guardian, Al Jazeera, VICE, TIME and others. shaunswingler.com, @shaunswingler

BACK TO STORIES
More stories in agriculture, business, culinary